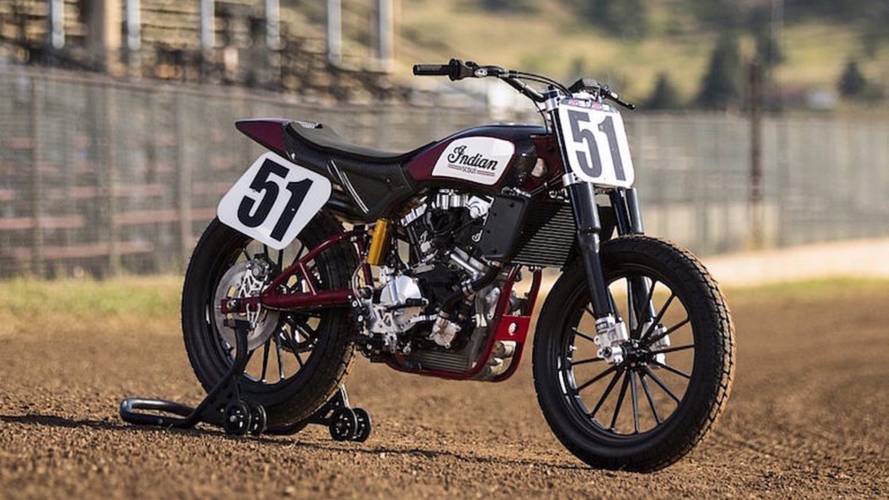 Indian’s FTR750 has caused quite an uproar since its debut. When the manufacturer announced a limited production run of just 50 units of the racer would be offered to the public at a cool $50K a pop, interest in the bike went through the roof. Now, after the Indian Wrecking Crew swept the class in 2017 – taking first, second, and third places at the end of the season – the elite competition tracker has become a go-to choice for privateers in 2018.

Indian’s American Flat Track Manufacturer’s Championship-winning machine is a highly refined racer developed with the help of massive amounts of funding, data-mining, and research and development. The bike is powered by a liquid-cooled, 748cc, 53-degree V-Twin married to a four-speed transmission. The powerplant weighs in at just 106lbs, is good for a claimed 110hp at 10,000rpm, and boasts a reported top-speed of around 130mph.

In addition to the Wrecking Crew clinching the top three spots in the American Flat Track Championship, the team also nabbed 14 total wins, 37 podiums, and an impressive half-dozen podium sweeps. Jared Mees, the 2017 Grand National Champion, earned a total of 10 race wins as well as a record setting 17 total podiums. With all of the FTR’s success, it’s unsurprising to see a handful of noteworthy (and well-funded) privateers have opted to utilize it for their respective 2018 seasons.

“We’re extremely excited to see so many talented riders turn to the FTR750 this season. We’re committed to supporting not only our factory team, but the privateers, as we have an aggressive contingency program in place that will reward these riders with performance incentives,” stated Gary Gray, Indian's Vice President of Racing, Service & Technology.

So far, six privateers are confirmed to be piloting an FTR750 for some or all of their respective 2018 seasons. They include recognizable names in the flat track community such as two-time Grand National Champion Jake Johnson, 2017 fifth-place finisher Jeffrey Carver, flat track’s TT master Henry Wiles, plus Chad Cose, Jay Maloney, and three-time Grand National Champion Kenny Coolbeth Jr..

“After seeing the Scout FTR750’s capabilities last year, I couldn’t be more excited to be riding it this season. I’ve been training hard this offseason and I’m looking forward to competing this year and giving the Indian factory team some competition now that we’re all on the same bike,” explained Coolbeth Jr. who will be piloting an FTR for every round of the 2018 season.

America’s oldest motorcycle company also decided to pour more than $350K into contingency incentives for the 2018 American Flat Track Championship. This includes $5,000 for first-place wins, $4,000 for second-place, $3,000 for third-place finishes, payouts for up to 10th-place finishers, and a $25,000 prize for a season championship. This is admittedly a lot of dough, though after a stellar race season in 2017, it’s easy to see why Indian is happy to pony up that much in incentives this year.