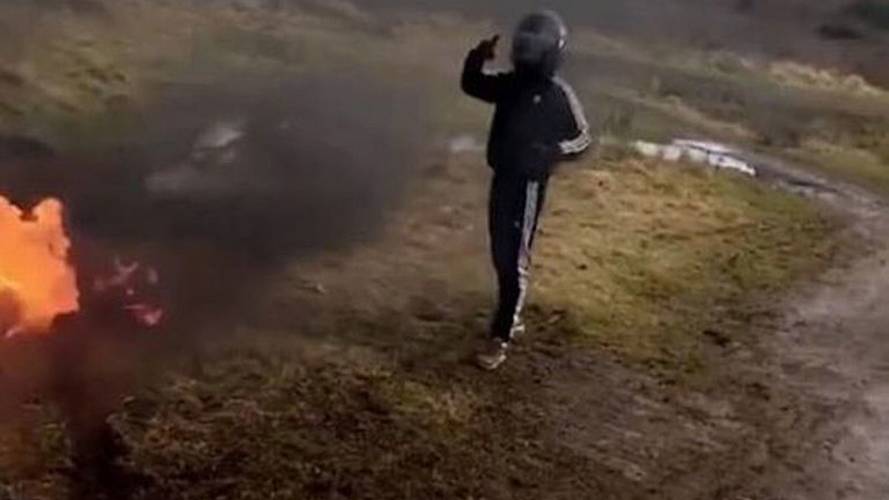 Thieves set 1950’s Triumph ablaze after owner fails to pay ransom - issued over Instagram - for his stolen bike. But that’s just the tip of the iceberg.

UDATE: After public uproar following the burning of a stolen antique Triumph, Avon and Somerset police have announced several arrests made in their "Operation Buell". -TH

Remember last week we told you about those little jackasses in Bristol, UK, who stole a guy's Triumph, tried to ransom it back to him, then torched it when he wouldn't pay up? Well, good news everyone! Police report that more than a half-dozen arrests have been made relating to that case and others thanks to “Operation Buell”, a task force setup to curtail the rampant motorcycle theft epidemic and monitor its perpetrators’ posting about their crimes on social media. While this sounds like good news, details are still somewhat murky.

Theft Up in the US Too: Motorcycle theft figures on the rise

What we do know is that seven individuals were arrested in Avon and Somerset Police’s recent crackdown on the “Bristol Bike Gang”. Two of these n'er-do-wells have already been charged with a numerous offenses pertaining to the rash of motorcycle-related crime in the region. The massive public outcry over the area’s motorcycle theft put a lot of pressure on law enforcement to produce results—i.e. arrests. Ideally this would have a two-pronged effect—it would take several key figures involved with the series of crimes off the streets, and the charges and punishments of those arrested could be harsh and intentionally well-publicized in an effort to deter others from engaging in similar activities.

The bike that broke the camel's back, so to speak.

The situation had reached somewhat of a boiling-point last week after a 1951 Triumph was stolen, ransomed, and then set afire—an act that was filmed and posted to instagram—shortly after the bike’s owner failed to pay said ransom. The editor of the largest local paper had even gone as far as writing an op-ed about the police’s inability to get the situation under control. Then two days after the bike was torched a second Instagram account associated with the gang posted yet another bike along with a ransom demand/auction (essentially an auction where the owner was allowed to bid on their own bike). According to local media; within hours of the post police had three in custody connected to Bristol bike thefts, though there was no word on if those arrested were directly tied to any stolen-bike social media activity.

Not just in the UK: Wes’ ask a motorcycle thief

A few more alleged members of the gang were caught in a single bust on Friday (February, 16) at 4:30AM when police received a tip-off from a member of the public about a pack of teens trying to start a bike that seemingly didn’t belong to them, leading to the arrests of a 15-year-old, a 16-year-old, and fortunately a 19-year-old - who is old enough to actually be hit with a significant prison sentence in an adult-ass (albeit European) facility. Also two bikes were safely returned to their respective and rightful owners following the trio of arrests on Friday, which is always good news.

It also appears that at least five out of the seven arrested have been released on conditional or unconditional bail and are awaiting trial scheduled for next month. Inspector Rob Cheeseman of the Avon and Somerset Police Department—who leads “Operation Buell” and has been much of the face/mouth-piece for local law enforcement when communicating with the public or media about the issue—spoke to the press following the arrests.

“These arrests and subsequent charges follow months of both overt and covert police work," said Cheeseman. "We know the motorbike community of Bristol have been hit by recent thefts and I hope these results send a strong message that we will relentlessly target anyone involved in such criminality.”

ASPD also publicly released (or rather re-released) security advice and theft prevention tips to the public via the department’s website. It's pretty obvious practical stuff like lock your bike/scooter to an immovable object, park it where it can be seen, lock up your two-wheeler when at home, use an antitheft device, etc.

After hearing about the arrests this morning, I hopped on Instagram and was pleased to see several of the main accounts associated with the “Bristol Bike Gang”—including “Biketakerrr”, the account that tried to ransom the 1951 Triumph—are no longer active. When doing a search for several accounts I did notice an account called “Biketakerrrs_named_and_shamed” which is what it sounds like. It has posts that feature info behind the IP Addresses associated with accounts boasting about stealing motorcycles, news articles about arrests, and requests for people to keep their eyes peeled for recently stolen bikes.

A post from from “Biketakerrrs_named_and_shamed” showing the IP address info for one of the accounts supposedly connected to the “Bristol Bike Gang”.

Obviously the Avon and Somerset police have no intentions of slowing down their efforts now that a handful of arrests have been made, and there’s still a lot of work that needs to be done to combat local bike-related crime. It’s also probably important to give the police credit where credit is due. While it's important to us, motorcycle theft isn't the only or most important crime the coppers have to deal with. They can only do so much, especially as their budget and resources continue to get slashed as crime grows. We’ll be sure to report back on the issue as more information becomes available.

We’ve previously covered the rampant bike and scooter-related crime wave that’s plagued the UK in recent years, but an incident from a couple days ago takes things to another level. During the late-night/early-morning hours of February, 8, thieves stole a 1951 Triumph Thunderbird from a garage near Clifton, England. A few days later the thieves issued a ransom via Instagram, threatening to torch the classic parallel twin if the owner didn’t promptly fork over £1,000 ($1,400). Two days after the owner failed to pay the ransom, the crooks followed through on the threat, torched the bike, and posted a video of the act to social media.

The crew, which goes by the name of “Biketakerrr” on Instagram, has posted dozens and dozens of stolen motorcycles and cars to the account, with the first post dating back to July of 2017. All throughout the account they shamelessly brag about their antics, leaving captions on posts showing stolen bikes saying things like “Lock it or lose it” and “more bikes to come don’t worry”.

This follows on the heels of a massive rash of motorcycle theft and vandalism reports committed by the so-called “Bristol Bike Gang”, a crew primarily made up of teenagers from the North Bristol area. This part of an increase in all types of crime in Bristol, a situation exacerbated by the local police force’s shrinking budget. Adding insult to injury is the fact that a handful of the bike burglars have started social media accounts showing off various stolen bikes.

As motorcycle thefts become increasingly frequent, the number of bikes recovered and thieves brought to justice is depressingly low with more than 8/10 cases leading nowhere. With the underwhelming response from local police, the public has stepped up to combat the trend in crime. In the last year alone, frustrated citizens in Bristol have organized a theft-awareness rally and a town-hall style meeting giving the public a chance to voice their concerns.

Where’s Tom Hardy When You Need Him?: Actor Nabs Moto-Thief

Tired of the lack of action, a collection of residents in the Bristol area compiled a list of names involved in the theft-ring, but police seemingly haven’t been able to utilize the information collected. Making matters even worse is the fact that the individuals who have been caught have gotten off with nothing more than a slap on the wrist. That appears to have sent a message to the thieves that they are untouchable because to some extent, they know they are. This has lead to more and more social media accounts used to taunt police and victims.

In the defense of the police, budgets have been slashed by more than $90M since 2010, resulting in a loss of 650 officers.

"We have to assess the threat, harm, and risk of an incident, so for instance if there has been a rape of a child then we have to focus our attention on that,” Police and Crime Commissioner Sue Mountstevens told the Bristol Post.

Last year police also launched “Operation Buell”, a special investigation monitoring the online presence of the thieves. But once you take a look at some of these social media accounts, the public’s frustration becomes a lot more understandable.

Since posting the burning Triumph, "Biketakerr" has uploaded three more stolen bikes, so it’s pretty clear the thieves have no plans on slowing down. The only minor silver-lining is that the little idiots who did this were stupid enough to relentlessly post about their crimes on social media. This not only has the potential for leaving valuable digital footprints, but the thieves' online bragging has garnered a lot of media attention which almost always prompts police to invest more resources into the case.