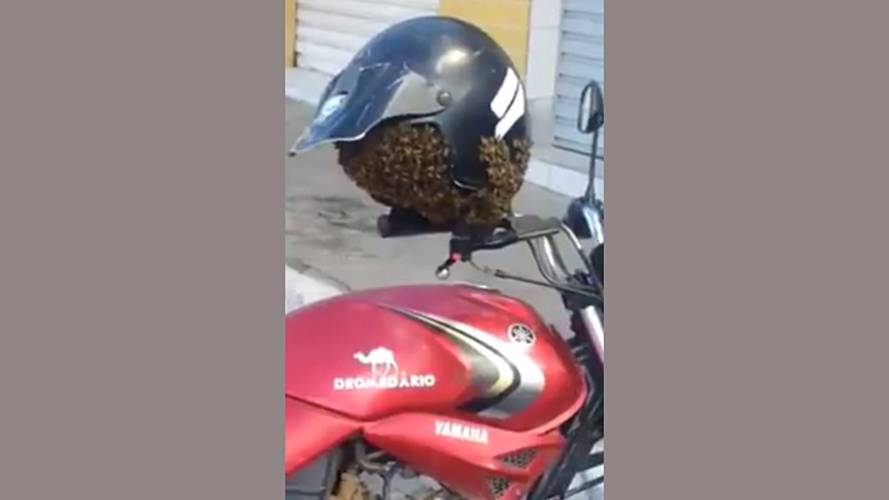 So, for the first few years I rode I did so with an open-face helmet and a pair of 30s-era aviator goggles. In that time I swallowed approximately nine billion bugs while riding around the back roads and country highways of Michigan and Ohio. I also had more than one bee, wasp, or junebug fly into my helmet and get stuck there where it would invariably sting the crap out of me. Thankfully, I only ever got one big bug in my lid at a time. A poor guy down in Brazil wasn't so lucky, however, because he somehow ended up with thousands of bees in his lid.

There's precious little info to go on here, but apparently a motorcyclist left his Yamaha parked on a street somewhere in Brazil and walked off to run some errands. When he left, he hung his three-quarter helmet on the handlebars, something we've all probably done a million times. While our man was away, a huge swarm of bees descended on his bike and crawled up into his helmet. When he returned, it was crawling with countless honeybees just minding their own business in there.

Of course, this being the twenty-first century, the phones immediately came out and a number of passers-by got good footage of the shocked cyclist as he took in the enormity of his situation. There he was, just trying to get on with his day, and a bunch of bees had flown in to ruin it. As they are wont to do, onlookers provided some helpful advice and copious amounts of jeering, as seen in a video that's been making the rounds on the internet.

Eventually, the fire department arrived and dealt with the situation. There's no word on the bees or the poor guy whose helmet they invaded, so let's assume that the bees all found a new home and Yamaha guy somehow ended up with a lifetime supply of honey.

PS: If anyone knows what kind of bike this is, let me know in the comments. I think I need one.