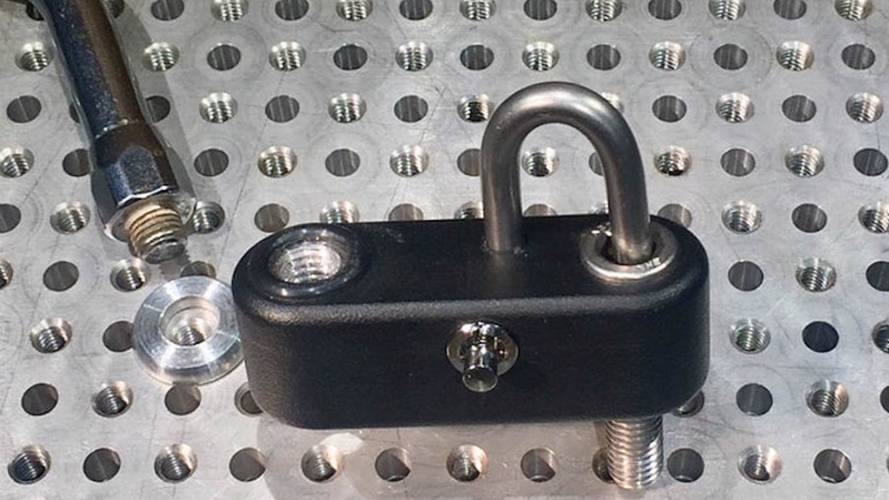 The MirrorLok claims to be an all-in-one mirror stabilizer, riser, and helmet lock. But is it any good at those things?

An Arizona man’s gadget designed to keep riders safer while on their bikes, and their gear safer when away from their rides.

Crowdfunding sites have been a game-changer in the manufacturing industry. Despite Skully leaving the motorcycle segment with something of a black eye after its shady dealings, there are some genuinely worthwhile ideas being pitched. One such worthwhile idea is the MirrorLok, a small, American-made device that offers clever solutions to a host of problems common riding issues.

The MirrorLok is the brainchild of Arizona resident and longtime motorcycle enthusiast Al Jesse. In Jesse’s more than four decades of riding, he noticed a handful of problems that he felt needed solutions. The first issue he wanted to address was the fact that many stock motorcycle mirrors mostly reflect the riders shoulders rather than the road. The second was that many mirrors tend to vibrate at speed, making them exceedingly difficult to use. The last thing Jesse noticed was that new bikes with factory helmet locks are a rarity these days.

So rolling up his sleeves, he got to work creating a tool to solve all these issues – the MirrorLok. The small device is machined from a single piece of high-grade aluminum coated in a black powder finish. It screws in to a bike's stock mirror mount, then the mirror screws into the MirrorLok. This boosts the mirror's height, resulting in a better view. It also stabilizes the mirror and drastically reduces vibration to make the image in the mirror clearer.

A view with and without the MirrorLok

Then there's the lock, a small U-lock style unit that anchors one or both of the 12-inch (or 24-inch) security cables that come with the MirrorLok. The actual MirrorLok only weighs about 3 ounces and measures three inches long and an inch high. As of press time, the Kickstarter has only raised $3,111 out of the stated $35,000 goal. The page is currently offering several early-bird specials in which backers can pledge around $100 (or less) for a MirrorLok that is expected to ship around June of 2018.

The MirrorLok and cables in use securing a helmet and jacket.

Setting aside the possible Pandora’s box of problems involved in transferring tens of thousands of dollars into the bank account of someone with no experience in business management or manufacterering logistics, crowdfunding sites allow anyone with an idea for a product to make said idea a reality. I do question the strength of the cables and whether or not a simple pair of bolt cutters could sink right through one of them. I previously had a lot of faith in my carabiner-style helmet lock, but after my buddy's new Schuberth had its strap cut while locked to his bike, I’m much more wary of leaving anything on the bike – locked or not.

It should be interesting to see whether or not Jesse reaches the project’s goal by the end of the Kickstarter Campaign, which comes to a close on March 1st, 2018.