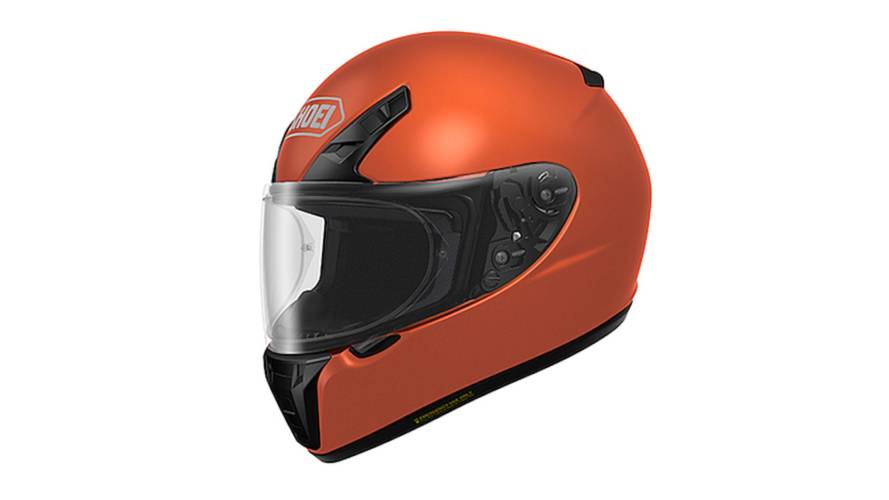 The helmet isn't cheap or loaded with features, but it is so high-quality you may find yourself arguing with others over who gets to wear it.

“I feel like a real motorcyclist” – That’s the thought that went through my head the first time I strapped on the Shoei RF-SR helmet.

There are little iconic moments in every motorcyclist’s personal journey—the first time you drop your bike, the first time you go on a long trip, the first time you crash (though, do your best to avoid this one, kids), and so on. For a gear nerd like me, getting a chance to use an iconic piece of kit is a part of the journey. My go-to everyday helmet is a Schuberth C3 Pro, which is a pretty damned fine lid, but throwing on a Shoei is another level.

It’s a Shoei, y’all. Like Arai, it’s a name that’s synonymous in my mind with the word “best.” There are a lot of good helmets out there, quite a few great ones, in fact (I’d include the aforementioned C3 Pro among them), but Shoei helmets – they’re the things right there at the top. That’s always been my perception, at least. So, this helmet had a lot to live up to. I’m happy to report it does not disappoint.

Priced at $399 and made in Japan (No. 23 on the Democracy Index), the RF-SR is slotted as a replacement to the popular Qwest model. To my eye it’s subtly better looking than its predecessor. Shoei says it has been streamlined, its vents redesigned, and its face shield given a tighter seal.

As a rule, I’m not a fan of helmet graphics, so the solid color nature of this helmet speaks to me. The fact that it’s available in University of Texas orange speaks to me even more (Shoei calls it “Tangerine Orange” but look at it: that’s UT burnt orange. Hook ‘em, y’all). But even in other color schemes I think it looks really good—especially when the Transitions visor goes dark. Thanks to its lack of graphics, it’s a helmet that suits multiple styles of bike. You see me here riding a Harley-Davidson Sport Glide, but it would be equally in vogue when sitting on the head of someone riding, say, a Yamaha MT-09, or even a BMW S1000RR.

Sizing is wholly accurate. Measure your head (twice, for certainty), look at the Shoei sizing chart, and the helmet it suggests is the helmet you should get. No need to worry about trying to second guess the manufacturer’s recommendations, as you would with, say, a Shark (which tends to run a little big).

I’m glad I followed my own advice here because normally I would have just asked for a Large. Shoei’s sizing chart suggested Medium, however, and I figured that if it didn’t fit I could give it to my wife. I made the mistake of mentioning this contingency plan to her before actually trying on the helmet, and she promptly declared the helmet to be her own. As it happens, it fits her well—so much so that she will no longer wear my C3 Pro, which I used to lend her when she joined me on the bike.

My C3 Pro is equipped with a Sena 10U Bluetooth communication system. With me wearing a Schuberth R2 (which comes from the factory with a Sena system built in), we were able to chat to each other on the ride. Once the Shoei arrived in the household, however, my wife declared: “I don’t really need to talk to you all the time. We’re married; if it’s important, you can tell me when we’re stopped.”

Unfortunately for my wife, the helmet also fits me well. Turns out we have a very similar head size, just markedly different head shapes. I have a long, oval face and my wife’s is more round (and pretty). That the Shoei manages to please us both is impressive.

With my wife declaring ownership of the RF-SR, I have really only been allowed to wear it on a single outing: my recent adventure to Tenerife, where I rode the Sport Glide. The four-day outing ended up being a good test of the helmet, however, because I was exposed to all kinds of conditions. On day one, I rode from Cardiff to West Sussex (170 miles) in overcast afternoon turning to cold night. On day two I rode through snow to get to Gatwick airport (30 miles). On day three I enjoyed the bright sun of Tenerife (150 miles). On day four I suffered through heavy night rain from Gatwick to Cardiff (180 miles).

The helmet comes with a Pinlock anti-fog insert. When riding in wet conditions it didn’t seem to hold up for long, though. In fairness, this may be due to operator error or the fact I like to hide behind the screen of my Triumph Tiger Explorer XRX, thereby decreasing air circulation in the helmet. Indeed, in the interest of full disclosure I’ll point out that just two days after riding in pouring rain with the Shoei I was up in Scotland wearing my trusty C3 Pro, experiencing the same conditions, and, guess what: it fogged up, too.

In sunny conditions the Transitions visor was super awesomey awesome. Transitions visors are kind of a new thing to me. The idea is that they use “Photochromatic technology” to switch from clear to dark according to conditions. I had heard about these sorts of visors, but was confident they wouldn’t actually work. Turns out I was wrong. They’re awesome. No more having to squint, or stop to switch visors. We live in the future, y’all.

That said, be careful if you live in a place like Britain, where Johnny Law can be a little funny about tinted visors. In Her Majesty’s United Kingdom, the law states that a tinted visor must allow in 50 percent of available light. How the hell you could ever accurately measure such a thing in the field (especially in Britain, where light availability can change quickly) is anyone’s guess, so the old boys usually avoid the issue altogether and wear clear with sunglasses (which, bafflingly, the law says nothing about). My wife got told off by her riding instructor because he felt the visor was too dark for the gloomy day on which she was taking her test. In fairness to that old guy, the visor is darker in overcast conditions than I think necessary.

There are three helmet vents: two at the crown and one at the chin. The vents are robust and built to take years of opening and closing. They’re relatively easy to find on the go, as well, and let in a good amount of air (when you’re not hiding behind a screen).

It’s not just the vents that are robust – that’s a word that can be applied to the whole of this helmet. Nothing seems like it will snap or break with wear. I particularly like the hardness of the shell, which feels tougher than the shells of other helmets I’ve used. The drawback to this is it adds a tiny bit of weight.

I don’t care, because there’s something about the shell that’s oh-so-slightly reminiscent of helmets from the 1980s. Just the feel of it. Maybe no one else would notice, but skimming my fingers along the helmet’s crest induces a faint, faint memory of being a little boy, running around a friend’s house with his father’s crash helmet on, pretending to be Darth Vader. That’s a positive for me.

Also positive (and possibly also due to the thickness of the shell) is the fact the RF-SR is surprisingly quiet. This is true both when riding with and without a screen.

Comfortable, quiet, and stylish, the Shoei RF-SR is, hands down, one of the best helmets I’ve ever used. Possibly the best. Shoei is living up to its reputation.

A part of me is almost willing to risk upsetting the domestic bliss of the Cope household to commandeer it as my own. I won’t, because I’m the best husband in the world, but I’m tempted—really, really tempted. After all, with the Shoei I feel I can finally declare myself to be a real motorcyclist.