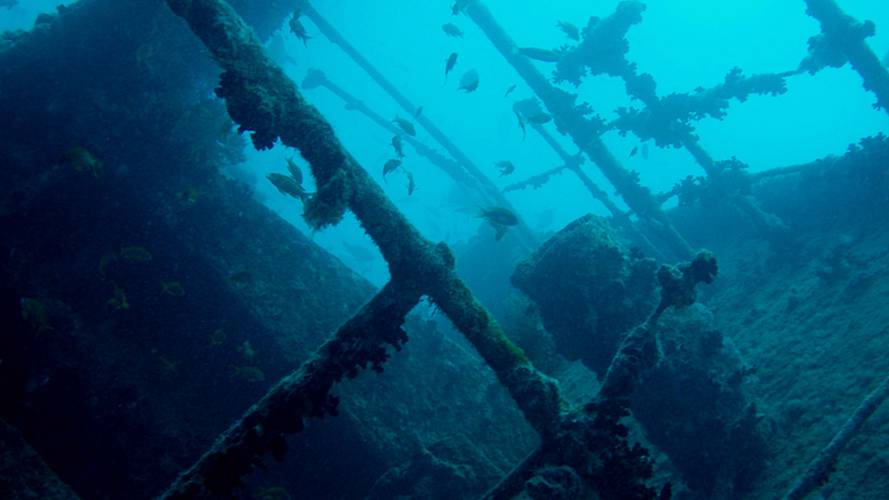 German Photographer Captures Nortons in their Watery GraveTobias Friedrich won a prestigious photography award for his photo of a sunken WWII...

You can find a lot of really cool stuff diving shipwrecks—treasure, historical artifacts, clues to mysteries, the secrets of the Great Old Ones, etc. In a popular wreck just off the southern tip of the Sinai Peninsula, a German underwater photographer captured something quite different—dozens of World War II-era Norton 16H motorcycles.

On June 2, 1941, the SS Thistlegorm set sail from Glasgow, Scotland, en route to Alexandria, Egypt. She was an armed British Merchant Navy vessel launched earlier that year, and had made three previous runs through treacherous, Kriegsmarine-infested waters carrying desperately needed materiel. On this, her fourth trip, her hold was stuffed with Fordson trucks, Norton and BSA motorcycles, boots, uniforms, rifles, ammunition, and aircraft parts bound for Allied forces fighting in Egypt. She was even carrying two massive steam locomotives lashed to her deck for Egypt's National Railway.

Due to heavy German and Italian activity in the Mediterranean, she sailed in a convoy under the watchful eyes of the Royal Navy which traveled down the west coast of Africa, around Cape Horn, up Africa's east coast, and into the Red Sea. Unfortunately, the Suez Canal was blocked, so Thistlegorm and her convoy put in at a safe anchorage near the tip of the Sinai Peninsula and waited. Unfortunately, German intelligence got wind of a convoy in the area, and two HE 111s were dispatched from Crete to find it. The bomber pilots didn't find the convoy they were looking for, but they did find Thistlegorm's convoy. So, figuring one convoy was as good as another, they attacked.

Thistlegorm took two bombs near the stern and went down almost immediately after a massive explosion caused by detonating ammunition tore off her midships superstructure. She lay in 100 feet of water on the bottom of the Red Sea until Jacques Cousteau rediscovered her and dove the wreck. Since then, Thistlegorm has been a popular destination due to her remarkable state of preservation and easy access to her holds which are still stuffed with cargo.

DOWN WHERE IT'S WETTER: You're In the Army Now - Motorcycles at War

According to our colleagues at Cycle World, Friedrich—who has been shooting since 2007—had wanted to shoot Thistlegorm's hold for a while, but knew it would take a bit of planning.

“For a few years now I had had this image in mind as the motorcycles on this truck inside the SS Thistlegorm lie so perfectly together," Friedrich said. "But you can only barely capture it because the wall is very close and you can’t move backward enough to capture the whole scenery. As a result I had to create a panoramic image of the same scene to capture the whole cargo deck, including some lights that give the image more depth.”

The photo, which Friedrich calls "Cycle War", speaks for itself, honestly. He did a hell of a job capturing the otherworldly, peaceful feel of this long-forgotten war materiel. Other people thought so as well, since he won the prestigious Underwater Photographer of the Year  award for 2018, a contest in which he beat 5,000 other entries.

TAKE IT FROM ME: BSA is Back! Mahindra Announces Return of Storied British Marque

If you're into photography and would like to follow Friedrich's adventures underwater (and you should, because he's a hell of a shooter), check out his Instagram.