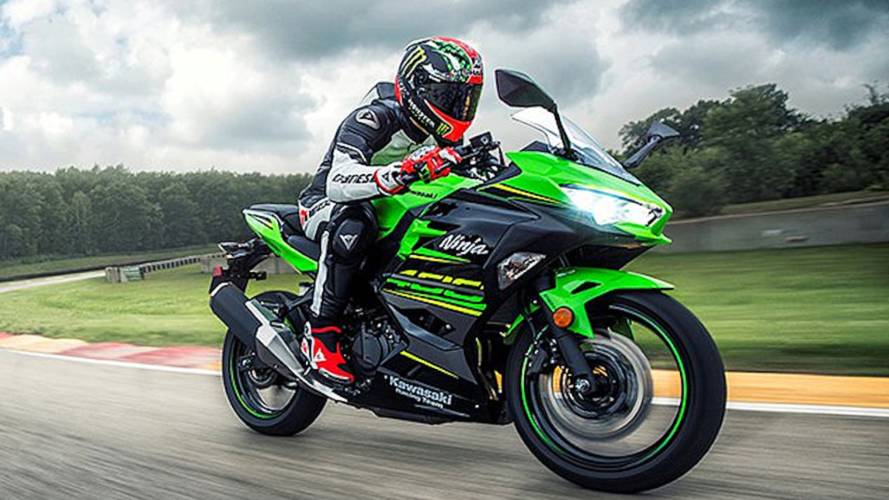 Kawasaki's new Ninja 400 sportbike will be legal to race in the WSBK Supersport 300 class in 2018. The class will likely get a new name.

World Superbike announced that the Kawasaki Ninja 400, once homologated, will be eligible to compete next year in the World Supersport 300 class. And how is it, you may ask, that a 400 would run in the 300 class? Read on.

The lads at motorcycle.com noted the irony of a 300cc class in which Kawasaki had the only 300. However, the Ninja 300 ridden by Scott Deroue came third in the championship, won by Marc Garcia on a 321cc Yamaha YZF-R3. The 471cc Honda CBR500R was also eligible, and finished fourth with rider Mika Perez. The class would have included the KTM RC390, but the bike wasn’t homologated in time to qualify. All Supersport 300 machines must meet specific weight and maximum rpm standards, designed to create a framework of performance parity.

It seems likely the Ninja 400 will replace the 300 in the division, although the latter will probably still be eligible. And the 400 will be subject to different weight/rpm regulations. No word as yet on whether Suzuki may have an entry for next year, although the GSX250R will likely be seen in MotoAmerica’s inaugural Junior Class in 2018 which includes the same manufacturer lineup as WSBK.

Given the marketing opportunities of a light-middleweight class for beginning racers, the Junior Class may well come to attract manufacturers outside the current big five. We suspect that a few builders in India, China, and England will be watching the forthcoming season with interest, both in the USA and the World Supersport 300 events around the globe. The latter will likely be granted a name change for 2018, and hopefully the WSBK and MotoAmerica folks will agree on a common set of rules to give riders from everywhere a chance to compete before a wider audience.