Perpetual Motion: How I Came Around to Harley-Davidson 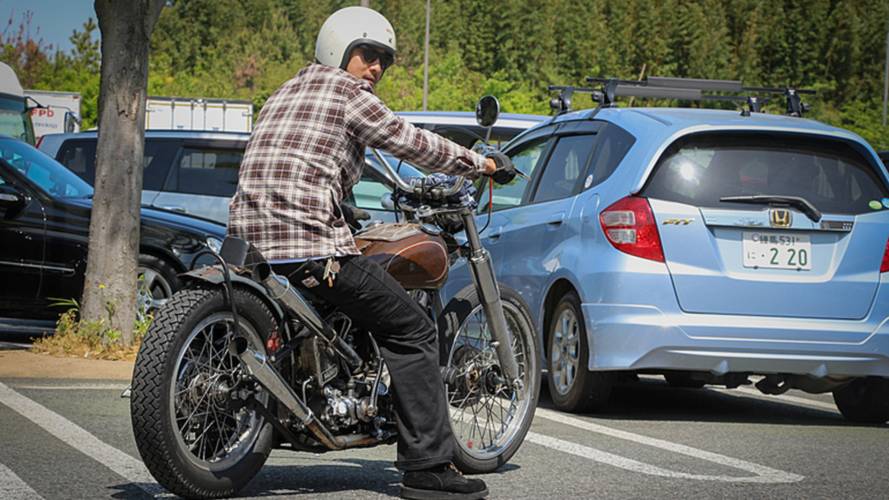 Justin tells us about the time a chance meeting with a pack of young Japanese Harlistas at a truck stop changed his mind about the Motor Company.

My introduction to motorcycling came courtesy of a thundering ride on the back of a Harley-Davidson when I was eight years old. In addition, my father kept a page from Harley-Davidson’s 1999 model year catalog on the wall of our home gym – a glimmering studio shot of the then-new Super Glide Sport. Despite all this, I have never been a big fan of the brand. Until recently, that is. My experiences over the years suggested that Harleys were owned almost entirely by white collar dads playing pirate, or something along those lines. Also, if I’m being perfectly honest, a large number of H-D owners hadn’t done the brand image any favors.

So, when we pulled into a road side truck stop 45 minutes outside of Tokyo, and a gang of Bar & Shield enthusiasts came parading in, I was un-interested at best. Sometimes the sound alone could send a shiver down my spine. Rumbling Screamin’ Eagle exhaust systems, massive batwing fairings with speaker systems playing AC/DC, or whatever. This, my friends, is what Harley-Davidson and their owners were in my mind. And then I turned around.

Everything is better in Japan. A bold statement I know, but the fact is we suck at a lot of stuff. Toilets play music while you poop over there. Vending machines sell hot coffee in cans for a dollar. Service is exceptional across all industries, and the 7-11 stores are a gift from the gods. Also, might I mention their attention to detail? Everything is thought out thoroughly. Miscommunication and translation mistakes aside, it’s the little things that they think about, the things we often overlook.

So when I walked over to peek at the Pirate Parade, I was astonished at what I saw. Knuckle, Shovel, and Pan-headed Harley-Davidson with period correct bits and pieces bolted on. Sitting in a circle, smoking and drinking cans of coffee, were a group of motorcyclists who were as interested in their own aesthetic as that of their motorcycles. Now, I’ve been to Born Free and I’ve seen photos from the Brooklyn Invitational, so I know people are all about building skinny tire style choppers – a throwback to the early sixties. I also know that growing a beard, wearing denim, and having a vintage three-quarter helmet is essential for entry into their cult club, so I wasn’t surprised to see our friends in the east emulating what’s been done on our side of the sea. Like I said earlier though, the Japanese do things better.

You’re probably wondering how a handful of Harleys clad in all the things I’ve already encountered could make me change my mind about H-D ownership. Well, it wasn’t the bikes that won me over, it was their owners. The smiling faces came after my curious questions, and they were eager to explain what they’d built and why. These guys were about as cool as they come. They were gracious, like everyone over there, and while they were clearly trying to make a statement – loud pipes saving lives, or something like that – they weren’t looking to upset anyone in the process. Their bikes were a testament to their skills and interests. Their outfits were the accouterments they felt necessary to complete the picture.

So, upon reflection, it’s not that I don’t like what Harley-Davidson has done, or what they’re doing for that matter – their new softail line is quite impressive, and I’ll be writing about my experience with them soon – I think I just dislike the attitude that accompanies some of the owners I’ve encountered. If you scrape all of that away and look instead at what remains, you’ll see a brand that’s built beautiful bikes and a group of people that are eager to add a little extra to make it their own.

READ MORE: The Case for the Mid-Sized Cruiser

Where I once assumed that owning a Harley would make me look like a middle-aged dentist or podiatrist out playing pirate on the weekend, or a bearded hipster trying to reinvent the wheel, I now know that it can be done without signing up for some kind of subculture. Which, I suppose, seems a little silly given the fact that these guys were riding bikes and dressed in clothing that would make you think they’re the by-product of an Americana craze gone wild. It was their attitudes toward the thing that made it seem authentic as opposed to orchestrated. Their interests and their aesthetic was honest, not the result of an overindulgence in Instagram. These guys dug a little deeper. They built period correct bikes with NOS parts. They wore helmets, boots, gloves and pants applicable to the era which they wished to emulate. And when they went thundering off down the highway, they waved as they went past.