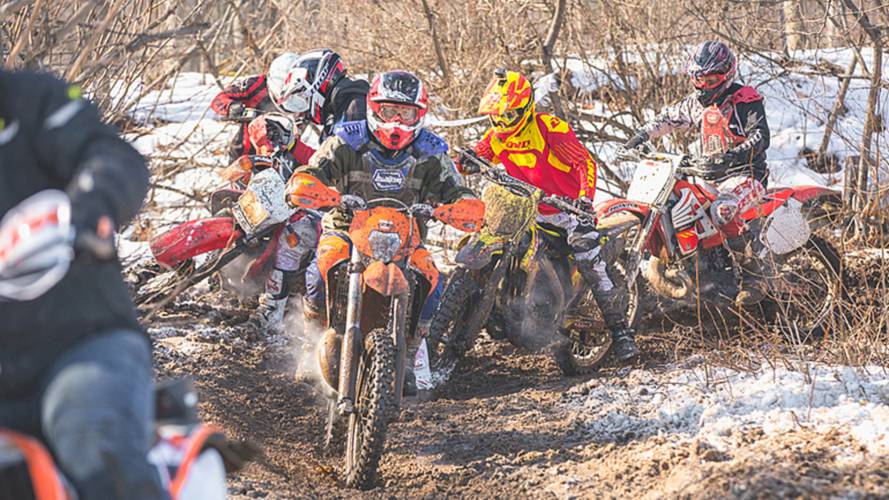 Warming our hearts in the middle of winter in the great white North with endless brapping and mad rooster tails; photos make it like you were almost there.

Words and photos by Ben Quinn

You know that warm and fuzzy feeling you get when you’re hanging out with friends and you look around and everyone is laughing or smiling and having an all-round great time? That’s how it felt at Grand Prix de Snow this year, even outside in the middle of the Canadian winter.

Grand Prix de Snow is graciously—as in it’s FREE entry—hosted by a few of the greats in our motorcycle community: Husqvarna Canada, Town Moto, and Lawrence Hacking. These folks have partnered with the Mohawk Inn in Campbellville, Ontario to create a day full of fast and furious fun in the the snow. It helps break up those winter blues, and gives riders and enthusiasts alike their motocross fix even while it's all wintery out.

As the riders and racers rip up the snow and mud, the crowd of hundreds who have come to share in the excitement, brapping, wipeouts and laughter, look on in anticipation for the next spill and mud bath. Even at the sidelines it was hard to avoid getting a little wet and likely a little muddy as well, but it's all part of the fun. The lineup of Husqvarna’s premium bikes available to ride and the short, fun MX course are the platform for a unique and fun day in the snow, but the participants and good natured community made this year’s Grand Prix de Snow a total success.

It seemed like every three minutes a rider went down in the mud and in almost every case they jumped back up with a smile on their face, and of course covered in mud as the crowd cheered in glee. The day’s schedule was pretty straightforward: register, practice, lunch, race, win prizes—including a prize for best dressed. Around noon, just before lunch, the sun made an appearance and things started to warm up setting the stage for some extra muddy races.

Watching the races you could see new Huskies, old huskies, vintage Hondas, Yamahas, Suzukis, Kawasakis, Can-Ams, KTMs, mini-bikes and mini-3-wheelers, even a new Grom whose rider was wearing a suit jacket and a bride’s veil. Those bikes and so many more filled the track with bumping, loud brapping, rooster tailing, wheelying and fishtailing fun until the checkered flag went up and a winner was determined. Of course riders were competitive, but fun definitely was the name of the game, and not to be cliché, but honestly everyone was a winner; because riding dirty in the winter!

The collaboration between Husqvarna, Town Moto, and Lawrence Hacking saw an event that brought warmth to our hearts at a time in the great white North that is typically frigid.