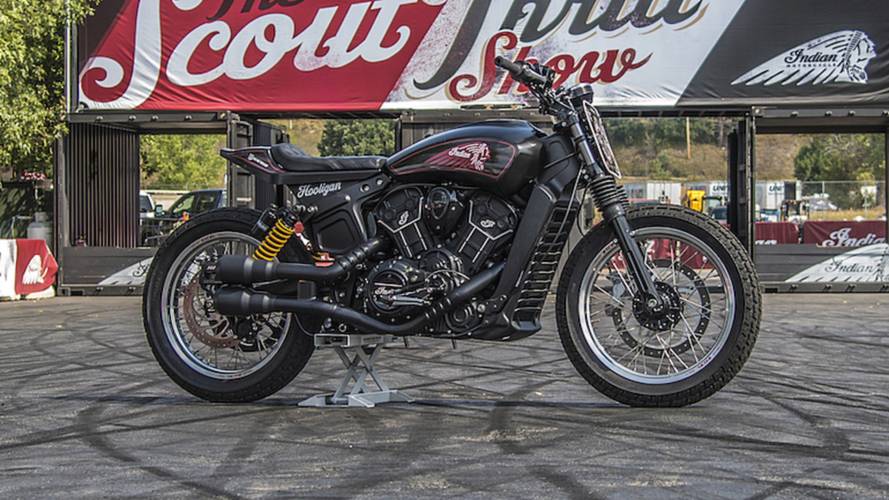 The manufacturers' European wing has a novel idea for those wanting to own a standard or upright Scout: pick up a wrench and get to work.

Signs point to a production model, but why risk being disappointed?

If you're like most right-thinking people, you'd like to see Indian Motorcycle deliver a standard/upright motorcycle powered by the Scout's 1130cc liquid-cooled V-twin engine. Certainly the company has done a good job in whetting our appetites with its Scout FTR1200 Custom, and there are strong indications a production version will happen in the not-too-distant future. But the folks in Indian’s EMEA division have come up with a solution for those who simply cannot wait: build one yourself.

With the rise of the Super Hooligan scene and the American Flat Track championship, Indian says it has heard from a lot of riders in Europe who are desperate to get their hands on a Scout-powered bike they can ride every day in comfort, but which looks ready to tear up the dirt.

“We’ve certainly seen interest grow in flat track styling since we unveiled the FTR1200 Custom at EICMA last year,” said Indian’s general manager in Europe, Grant Bester. “The beauty of the Scout is that you don’t need to cut or weld parts to transform the look. You can buy many of the parts you need off the shelf and fit them yourself at home, in the garage, with little more than an impact wrench and a good set of sockets.”

I’m an utter buffoon when it comes to wrenching, but I’ll admit to feeling somewhat inspired by Indian’s enthusiasm for how “easy” it is to transform a bike I love into a bike I really love. Bester points out that you could start with any of the Scout models as your base: the Scout Sixty, Scout, or Scout Bobber.

You can start small, relying on official Indian accessories to help achieve the desired look. That may be as far as some folks are willing to go. Indian’s head of Parts, Apparel, and Accessories, Andreas Geisinger, says some owners are fearful of taking a brand new machine, then stripping parts off or adding new ones on.

So, if you’re planning to achieve the feel and look of a standard/naked, it may be worth your time hunting down a good used model. Once that’s done, many bike builders and manufacturers are now selling special kits that will help you reach the promised land.

ALSO THIS: An Open Letter to Indian Motorcycle: Build a Scout Scrambler

“To get the flat track look, you’re really only going to take off key components and replace them,” Geisinger said. “So, things like adding mid-position foot controls, a different seat unit and adding new wheels. Most people tend to go for 19-inch wheels and then fit 12-inch shocks. You’re looking at paying around €2,000 to €2,500 to do that.”

To inspire riders to head into their garages, Indian has highlighted three well-known folks who have done the same:

Parisian photographer and filmmaker Dimitri Coste races his Scout and rides it on the street. When he isn’t racing on the track, he gets it back on the street by putting the stock front wheel back on, refitting the front brake, and putting the headlight and license plate back on.

“My bike started as a stock Indian Scout and I fitted a Roland Sands Super Hooligan kit that’s made especially for it,” Coste said. “All that remains from the original bike now is just the frame, the engine and gas tank. The rest is all from RSD. It’s a plug and fit job, so it only took me about two days of work.”

Another great-looking example of a flat track Scout comes from skateboarding god Steve Caballero (I had a Steve Caballero board when I was 12). His bike started life as a Scout Bobber, which he wanted to give the “street tracker” treatment – something he could ride on the road day-in and day-out, but then also take to a Hooligan race and turn some laps if he wanted.

“Adding 19-inch wheels was the first thing we did with the bike,” Caballero said. “That set the stage for everything else.”

CHECK OUT: Let’s All Tell Indian Motorcycle What to Do

A stunt rider long associated with Polaris products (Go search YouTube for videos of him tearing up Victory bikes), Tony Carbajal built a snarling Scout that he uses in his Indian Thrill Show. He even made a series of videos on YouTube detailing the build to show everyone just how easy it is.

“I have ridden and owned many two-wheeled machines – none of which could properly rip across the pavement and shred in the dirt like the Scout I have built,” Carbajal said. “I have a special love for this machine. A love that I can’t talk much about around my girlfriend or the other motorcycles in the garage. ”