Video: The Right Way to Commute in Winter 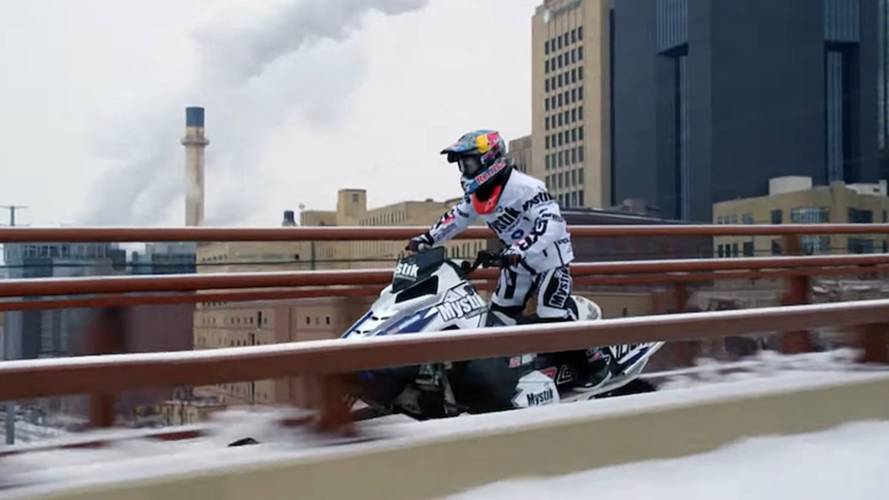 Snowmobiler Levi LaVallee goes crazy in Minnesota's capital city, St. Paul, and we love every second of it.

Look, I'm going to be honest with you, this video's link to motorcycling is tenuous. I mean, there's the fact the snowmobile being ridden here is made by Polaris – which owns Indian Motorcycle, as well as producing the Slingshot – but, truthfully, we're drawing your attention to this because it's just so damned cool.

Of course, I would say that. The video in question was filmed in my adopted hometown of St. Paul, Minnesota – the capital of the North Star State. Polaris, of course, is also from Minnesota, as is snowmobiler Levi LaVallee. There's a lot of attention being placed on St. Paul's twin city, Minneapolis, at the moment, so it's nice to be able to share a little love for good ol' Pigs Eye.

I suspect St. Paul officials were happy to shut down its major streets for this video because winter and winter sports are much loved in the city. Not only is it home to the state's NHL team, the Wild, but each winter it hosts the annual Winter Carnival, which this year involves a full-size castle made of ice. Building ice palaces is something the city's been doing off and on ever since 1886, when it stole the idea from Montreal, which was apparently managing to haul in all kinds of tourists with such an attraction. When an 1885 smallpox epidemic spoiled the mood in Montreal, the city fathers of St. Paul saw an opportunity.

I'd like to believe that first event was advertised as: "Come visit the smallpox-free city of St. Paul and also: castle of ice."

Whether it actually drew in tourists, I don't know. The people of St. Paul loved it though, and almost instantly an entire folklore was built up around the Carnival: there's King Boreas, a royal court representing each of the seven hills of St. Paul, King Vulcanus Rex and his "Krewe," women who dress up as 1800s prostitutes for some reason, and lots of other stuff that doesn't quite make sense to an outsider. When I was a teenager, the firefighters who represent the Vulcan Krewe used to run into bars, snatch unsuspecting women, and draw mustaches on their faces with shoe polish.

Ahh, the '90s, when abduction was good clean fun.