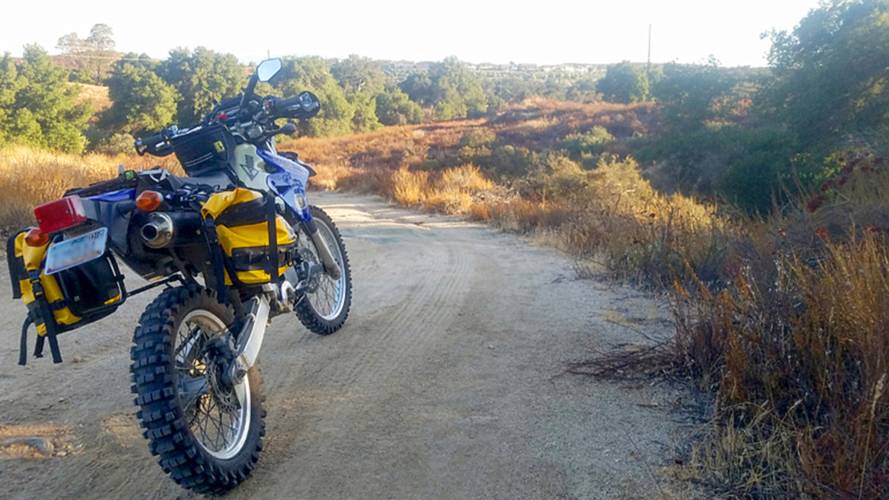 Kyra and Justin planned to head down to the Baja 1000. Unfortunately, a series of very bad, no good events conspired to make them miss the race.

That time when God, and Border Patrol, laughed while Justin and Kyra made plans

“They’re sending me back to America…”

Kyra’s voice trailed off on the other end of this wildly anticipated phone call. I hadn’t seen her since the border, and it had started to worry me a bit. Apparently for good reason.

“What the hell do you mean?” I crowed into my SENA headset, still riding south.

“I’ll call you when I get across,” she said, and hung up.

Turns out you’re supposed to be the registered owner of the vehicle you're driving when crossing the border into Baja. Funny, because she’d driven the damn thing across countless times, without issue. But clearly today wasn’t our day. Shit, it hadn’t been our week. Then, like someone slapping me square across the face, I remembered something I had overlooked in all our efforts to get to Ensenada on time – there was a firearm in the van! Nightmarish visions of Kyra being dragged off to a tiny Mexican jail filled my mind. I pulled over, stabbed at my phone with a gloved hand, desperately trying to call her back. The other end of the line sang loud in my ears:

“If you’re trying to make a call, please hang up and dial again.” Only, in Spanish. Complete panic ensued.

Let’s rewind a bit. The original plan was to ride our dual-sports down loaded with camping kit, inflatable surf mats, swim fins, and wetsuits. We were going to buzz the coastline after the start of the 50th annual Baja 1000, a race which I had been hired to photograph for a team sitting third overall in the SCORE series. We also intended to meet up with a few friends who planned to accompany us on the journey. Unfortunately, the week before we were scheduled to leave Arizona, Kyra’s much beloved 2006 Yamaha XT225 refused to start. So we threw a new battery at it and it fired right up. With our trailer out of storage and attached to the van, we went to bed anticipating an intense packing session the following day. The next morning when she went to fire up her little dirt squirter, she was greeted with nothing but a long succession of clicks – the sound of a battery (?) struggling to send enough power (?) to the starter motor (?). Well, shit.

I’ll save you the drab details, but suffice it to say, Kyra troubleshot every electrical connection on that damn bike. The battery was charged, then discharged as it sat overnight. It was a “key off amp draw” which, with limited time on our hands, was something we weren’t going to sort out. Not now at least. We loaded both bikes into the trailer anyhow, hoping for time in Southern California – where we planned to stage the van and trailer – to figure out the problem before crossing the border.

Fast forward back to the border. I tried calling Kyra six or eight times in succession, each time feeling more desperate than the last. I had just hit the coast on Mexico’s Highway 1, having navigated the nonsense that is Tijuana amd making my escape toward Ensenada. I looked over the map on my phone, did a few quick calculations and decided I would have a better chance of reaching her if turned back toward the States instead of pushing further south where I’d have cell service. In theory, anyway. So I pitched my DR-Z 400 around and headed back into the maelstrom that is TJ, front wheel aimed at America.

Rewind again, this time to our staging in SoCal. We arrived at our friend’s house in Silverado Canyon by nightfall, unloaded our bikes, parkied the van and trailer in a secure spot, and fell into bed with a full day ahead of us. The next day, after yet another 24-hours of troubleshooting on her XT, Kyra called it quits.

“I’ll just drive the van down and help you shoot the start , and then you can head south with Andy, Mike and Les (our aforementioned friends),” she told me, defeated but determined.

So, I proceeded to load only the essentials onto my DRZ – camera equipment and some extra clothes in case it got cold. Everything else – camping gear, surf stuff, clothing, etc. – I would load up after the start of the 1000. Again, in theory. Packed, I decided to take the DRZ for a shakedown ride. Key on, clutch in, choke out …but when my thumb hit that little red button? No dice.

“You’ve got to be kidding me!”

It was just a battery, but still... The next morning, I threw a fresh one into the DRZ, fired it up, and jumped on the Interstate with Kyra on my tail.

Now, back to the Kyra border situation. I was well on my way back through TJ when my SENA made the sound I had been eagerly awaiting. And dreading.

It was Kyra, they’d done a ‘secondary inspection’ and then sent her back across the border into America.

“Uh… You’re happy about this?” she asked, clearly confused.

“I’ll explain when I get there.”

The next bit of our conversation was spent untangling my thought process. While I had my camera equipment, I did not have clothing, camping gear, surfing stuff or anything else I needed to make this work. I, too, was defeated, but also relieved. No Mexican jail in Kyra’s future.

CHECK OUT: A Tiger in Mexico: Balls on Fire

To clarify things for those who have made it this far, the firearm I thought was in the back of the van had been left with our friends in Silverado, safe, secure, unloaded, all of that. Kyra had handled it unbeknownst to me. Those 45 minutes of anxiety, panic, and pure adrenaline though, they were unlike anything I’d ever experienced.

In the end, we decided our big Baja plan should get pushed back a bit. With the race starting early the next morning, Kyra unable to drag the van down on her own, and me feeling fully deflated, it was better to circle back later. To add insult to injury, the friends we were supposed to meet in Ensenada had suffered a similar, yet much less dramatic fate. The frame snapped on one of their elderly XR650L’s and had to be welded back together in a small town somewhere outside of Tecate. A day later, and well into the dunes which line the coast of northern Baja, the same bike suffered a clutch failure. Seems like none of us were supposed to have an easy go of things this time around.

Sometimes you gotta know when to quit.