Bike of the Week: Alta Motor’s “The Crapshoot” Drag Racer 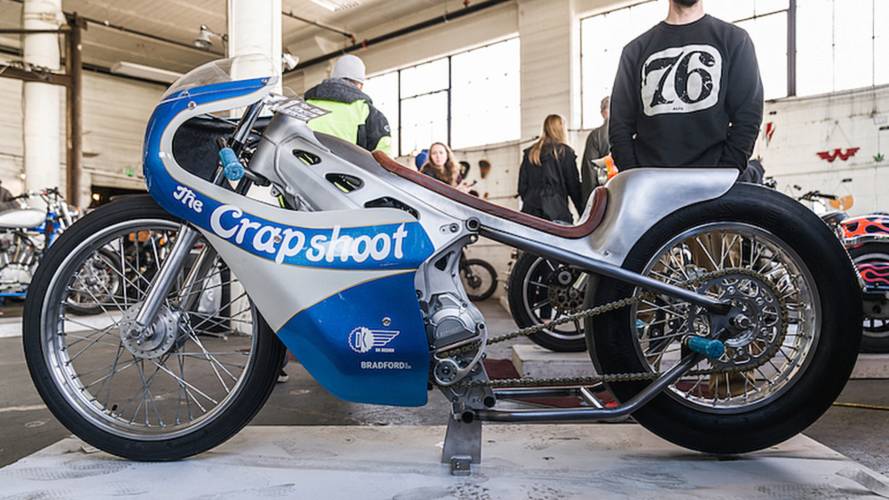 Alta Motors went nuts and built a drag racer built from a mix of old Honda and Harley parts, a few custom components, and a modern electric MXer.

Alta Motors brings something you might not expect to the 2018 One Moto Show in the form of a custom Redshift-based drag build.

Founded in 2010 as BRD Motorcycles, Alta Motors has quickly earned a solid name and reputation for itself by producing impressive, fully-electric two-wheelers. The company has made a strong effort to have a presence at local motorcycle shows and events to get the word out about its products. Recently the San Francisco-based marque showed off a fascinating, very cool drag racer build at Portland’s The One Moto Show that’s earned the spot of this week’s Bike of the Week.

Alta knew it wanted to bring a custom build based on its Redshift machines, and after bringing a street tracker to Portland last year, Alta designer John McInnis starting toying around with the idea of creating something a little more out there.

“I wanted to do something that a little bit more unique, a little bit more unexpected. Something you wouldn’t see any of our competitors attempting,” McInnis said. “Also I wanted it to show off the modularity of the Redshift platform and how with a few just a few basic hand tools you can pull a Redshift apart and turn it into something completely different.”

John sketched some designs inspired by some of Boris Murray's 1960s and ’70s-era drag racers from when—for a time—Murray held both the National Hotrod Association and American Motorcycle Drag Racing Association records for elapsed time and top-speed, as well as the records in five other leagues. The southern California-based drag racer famously built his own bikes and, created and piloted a 305-pound racer powered by dual, heavily modded Triumph 650 engines that ran on a mixture of 92-percent nitro-methane and eight percent alcohol.

Sadly, Murray passed away in November of 2014 at the ripe age of 78, but prior to doing so had inspired a new generation of racers, and, based on Alta’s build, seemingly continues to have an influence on the motorcycling world. After deciding a design, McInnis showed his renderings to Vinnie Falzon, Alta’s assembly line supervisor. Falzon was immediately on board with the project, so the two got the ball rolling on tearing down the 275 pound Redshift donor and began sourcing parts.

Despite the electric custom being a factory-backed project, Falzon and McInnis had to get pretty resourceful and creative. The front end is off a CB350, and the front wheel and rear brake pedal are off old Sportsters. The  chassis had to be hacked up and modified to accept a hardtail rear-end, which was quite a chore. Without the need for a gas-tank, McInnis and Falzon were able to run a single piece aluminum rear-fender, seat/seat-pan combo unit atop the frame. The electric powertrain also allowed for an incredibly tidy build. There is no clutter anywhere and the only thing under the seat is the frame and chain.

In the end, the two opted not to paint or powdercoat the bike so that the minor imperfections that come from hand-done work could still be seen.

“It gives the whole thing some character, it gives it that hand-built feel which is what we were really going for,” said Falzon.

The vintage fairing did receive a gloss blue and silver livery complete with hand-painted white script and gold pin-striping though, and is set off by a diamond-stitched brown leather saddle.

The opposite of Alta: Harley X Vance and Hines Drag Racer

Even though vintage drag racers definitely aren’t what come to mind when you think of Alta Motors, this retro-inspired custom still boasts a lot of Alta-flavor. In addition to the electric power plant—which produces a cool 120 foot-pounds of torque—the build’s hardtail frame still retains much of Alta's easily recognizable design.

“There aren’t too many other electric platforms that a really guy can get a hold of and turn into something cool like this, at least without major modification to the drivetrain,” said McInnis. “The general feel here is that we don’t want to take away your gas bikes, we just want to give people another option.”

Ultimately I was pretty surprised when Alta brought this bike to the table. It’s always cool seeing how passionate people in the industry are, and I can thoroughly appreciate the effort that went into paying homage to those that came before them.

“I definitely want to have a hand in making sure that it respects the past and respects where motorcycles came from, rather than looking like a space ship on two wheels,” said McInnis

Earlier this morning Alta Motors released a short video about “The Crapshoot” that’s worth a quick watch.