In Their Own Words - Women Speak on the Grid Girl Ban 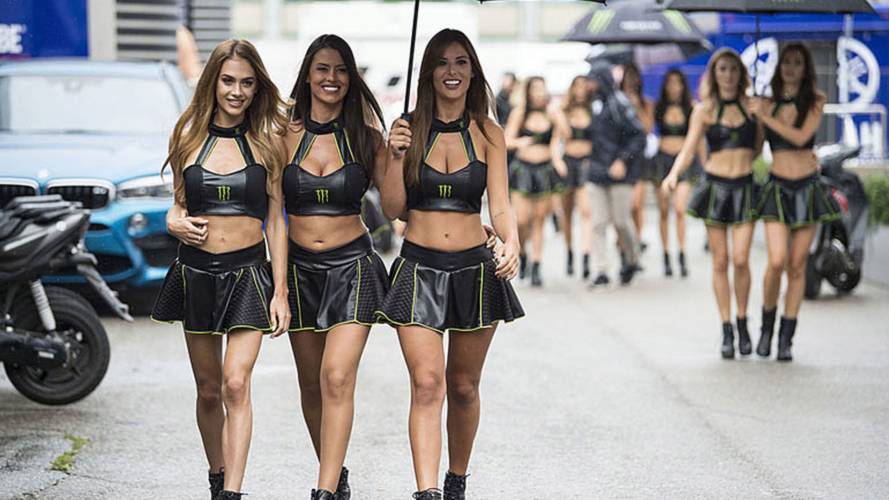 With F1 getting rid of grid girls, could the rest of the motorsports community be far behind? We ask some moto-ladies their opinions on the subject.

After F1’s recent ban on grid girls many feel MotoGP should follow suit, though not everyone shares that sentiment.

Last Wednesday Formula 1 announced that it was ending the practice of using grid girls. Grid girls, umbrella girls, paddock girls, whatever you want to call them, the practice consists of young, attractive, scantily clad women standing next to a racer on the grid, shielding said racer from the sun via an umbrella (hence the name). With F1 ending the long-running practice a debate now rages on about whether or not grid girls have any place elsewhere in today’s motorsport world.

CHECK OUT: Five Female Motorcyclists You May Not Have Heard Of

The practice supposedly began at the 1983 24 Hours of Le Mans when sunscreen purveyor, Hawaiian Tropic, brought a posse of bikini-clad model-types to the iconic event for promotional purposes. Since then grid girls have become a regular fixture in high-level motorsport competition. Thirty-five years later however, many are wondering if grid girls do more harm than good. Formula 1 – which is owned by the media giant Liberty Media – put out a statement on January 31 explaining the organization’s reasoning behind doing away with grid girls starting in the 2018 season.

“Over the last year we have looked at a number of areas which we felt needed updating so as to be more in tune with our vision for this great sport," said Sean Bratches, Managing Director, Commercial Operations at Formula 1. "While the practice of employing grid girls has been a staple of Formula 1 Grands Prix for decades, we feel this custom does not resonate with our brand values and clearly is at odds with modern day societal norms. We don’t believe the practice is appropriate or relevant to Formula 1 and its fans, old and new, across the world.”

In the wake of this shake-up, we collected opinions from various women in motorsports – journalists, racers, and even some grid girls – and here's what they had to say.

“I’ve been doing this for over eight years now and it should be our choice what we do for work, whether it be this, whether it be hostessing, ring girl duties, we should have the choice. What’s annoying me more than anything is the so called feminists, they are not even really feminists, are defending us without even asking us how we feel, and we’ve lost out jobs because of this. I have been a grid girl for 8 years and I have never felt uncomfortable!No one forces us to do this! This is our choice!”

CHECK OUT: Women Who Ride: Women of Flat Track Racing

"Its probably not the best way to market whatever product it might be towards women, but it definitely gets attention. It doesn't make me uncomfortable really, because I'm of the mind that if a girl wants to sign up for that gig that then that's really her business... We are both there for our different jobs. I'm comfortable with being judged for what I'm doing on the track more than I would be for standing around in Lycra."

“This is the 21st century, and the argument that the whole notion of a grid girl is completely outdated does make sense. If a company relies heavily on pretty women promoting them, then maybe they need to rethink their brand. The practice of using grid girls does seem a little outdated, but I certainly don't think banning them is the answer. Instead of banning women who are a part of motorsport, we need to make tweaks and encourage more women to get involved in other aspects of racing too."

“I have often wondered why MotoGP, just like so many other Motorcycle and other motorsports, need to employ scantily-clad young women in their promotions and events. It feels rather unoriginal and for a woman who is getting into the sport, can lead to being self-conscious just by virtue of being female. It’s quite transparently sexist and, much like any sport or entertainment that utilizes female nudity to enhance its appeal, leads me to wonder if it isn’t insecure about its own inherent appeal or value.”

“This is an important discussion and it should not be oversimplified or trivialized. I hope that women will be encouraged to participate in Motorsport in all ways that suit their own individual choices. I feel that it shouldn't be "all or nothing" but instead an equal opportunity for men and women to enter into Motorsport in the manner that they choose.”

Though not a woman's opinion, we've included the often outspoken Lauda's take on this as well:

“This is a decision against women. Men have made the decision over the heads of women. This is not doing any favors to F1 and especially not for women. Grid girls have always belonged in F1, and they should continue to belong in F1. You should be allowed to have grid girls because the drivers like them, the audience like them, and no one cares.”

As with any potentially controversial issue, such as dealing with gender issues, there's a broad range of opinions about this grid girl situation. How will it affect series like WSBK and MotoGP? Time will tell.