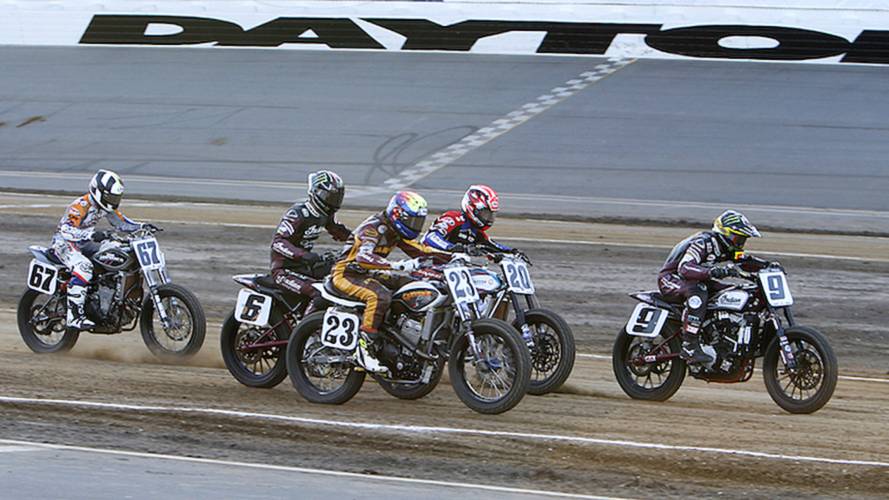 Harley-Davidson revamped the classic Daytona TT this year to make it a more enjoyable, more accessible, and more family-friendly affair.

Starting a flat track racing league or event today is incredibly risky. Drawing in the number of sponsors and fans needed to even financially break even is somewhat of a feat in and of itself. It made sense then that when news recently broke that the second annual Harley-Davidson Daytona TT at Daytona will include a host of new features to give flat track fans a more personal experience.

CHECK OUT: They're Back! Indian Wins Daytona Flat Track TT

Of course, the main reason anyone attends a race is for the racing (And the crashing -JM), and while watching the Harley and Indian teams battle it out in the America Flat Track Twins races is plenty damn entertaining, organizers have made a strong effort to offer fans more activities before and in between the race action. This year’s Daytona TT is more in line with an all-day festival than it is just a race, one that happens to coincide with Bike Week.

The actual track itself is another part of the draw, the unique 0.6 mile, five-corner circuit includes a chicane-like section, a jump, and of course two sweeping oval corners. In addition to the high-profile AFT Twins, the day’s racing schedule will also include the AFT singles, and will probably see many of last year’s classes return, such as the DAYTONA Supercross by Honda, the Ricky Carmichael Amateur Supercross, and the DAYTONA 200.

There is a definite aim to appeal to entire families with several intentionally family-friendly attractions setup during the race like the University of Northwestern Ohio Fan Zone – located on the in the infield of the iconic American circuit. The UNOH Fan Zone will include a Harley-Davidson stunt show, live music, a “kids’ area”, food and drinks, and a myriad of vendors selling motorcycle related wares. Fans will also get a chance to meet the racers and check out the American Flat Track Singles and Twins up close during a special hour-long meet-and-greet/autograph signing session in the track’s paddock garages from 4:30-5:30PM.

Another one of this year’s new features is the pit road bleacher seating, which allows fans to watch the action from inside of the Florida venue’s tarmac (see yellow part of map). Surprisingly the cost isn’t that much more than general admission, and as someone who’s had the privilege of watching flat track racing from alongside the track thanks to a press-pass, I can confidently say it really does make the experience a lot more enjoyable.

Two different VIP ticket packages are available as well. The first, priced at $69, grants access to the Daytona 500 Club, a luxury suite overlooking the track that boasts swanky rooftop seating, dinner, all-day snacks, and drinks (including beer and wine), and priority parking. The second option, a whopping $149, is the even ritzier of the two and gives fans access to the Rolex 24 at Daytona Lounge. The amenities offered are about what you’d expect – “premium snacks” and drinks, premium parking, flat-screens all over the place, WiFi (for whatever reason), all in an upscale, climate controlled setting.

The event kicks off March 15, 2018, with gates at 1:00PM EST. The first practice starts an hour later. Opening ceremonies don’t commence until 6:00PM, with the races getting under way half-an-hour later. General admission tickets can be purchased the day of at the race for $40,and all kids under 12 are free. Trackside seating (aka pit road bleachers) is also available for $49 preorder or $59 at the gates. You can also save 25 percent on general admission by preordering tickets now on the Speedway’s website, or by calling 1-(800)-PIT-SHOP (1-(800)-748-7467).