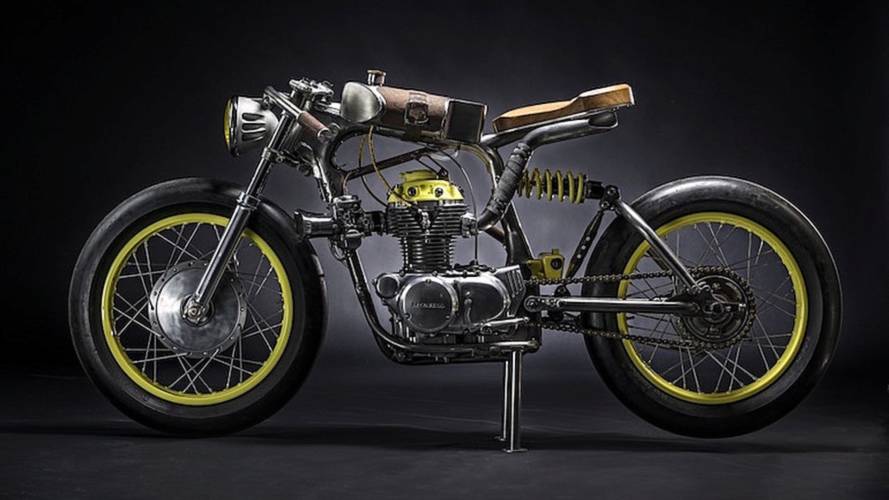 The guys at Titan Motorcycle took one beat-up CB350 parts bike, added a whole bunch of elbow grease and know-how, and came up with "The One".

Honda's classic CB-series bikes are arguably the most commonly customized motorcycle today, so you really have to do something special when working with classic Japanese scoots if you want to stand out from the crowd. Enter: something special. Titan Motorcycles' CB350-based cafe racer entitled “The One” is a exercise in minimalistic design, though the bare essentials that do remain are pretty stunning.

Titan is based in Graz, the capital city of the southern Austria's Styria province. The outfit churns out a wide variety of customs ranging from vintage cafe racers, to modern sport bikes, to bespoke V-Twins, and everything else in between. As this one-off CB suggests, Titan’s work is pretty next-level. A while back we featured Titan’s “Bavarian Bobber” as our bike of the week and though this CB is a wildly different machine, they’re both equally impressive customs. Throughout its existence, its crew has been collecting derelict bikes from the ’70s and ‘80s, and thus has amassed quite the collection of rusted-out parts bikes. This particular bike came into Titan’s possession as one more derelict parts bike, but was eventually pieced back together with a myriad of bespoke parts and aftermarket goodies.

Titan’s Tom Possod and Michael Siebenhofer spent a collective two years completing the ambitious little racer, trying to recreate something reminiscent of the iconic early-twentieth century racers that were unfortunately out of their price range.

“I’ve never had enough money for a proper racing bike from this period, so I’m compensating with this Honda build,” explained Siebenhofer.

One of the first things you’ll probably notice on this build is that the entire top end has been turned around 180 degrees, resulting in forward-facing carbs and rear-facing exhaust ports. This required the duo to grind a new cam, reroute oil-lines, modify the timing set, and move some studs around, but in the end they pulled it off with all the work being successfully done in house. When asked the obvious question Siebenhofer replied, “Why’d did I do it? Because I can”.

The next phase of the build dealt with the CB’s suspension. Wanting to up the little Honda’s cornering performance, the crew at Titan opted to go for a mono-shock conversion. Instead of tacking on a modern inverted fork unit up front, Tom and Michael overhauled the donor’s existing aftermarket suspension by lowering it and dropping in progressive internals. A steering damper was also sourced from a Triumph Daytona 675 to increase the bike's stability.

Up front, a one-off hand-rolled handlebar with internal wiring was fabricated, resulting in both the throttle and clutch now being controlled via twist grips. A set of LSL rear-sets were also sourced, which required the duo to fab up some handmade brackets in order to fit to the bike. While the taillight consists of an LED strip sitting flush in aluminum housing, the headlight is a rare EMD Vitamin C unit in unique housing that definitely adds to the build's visual-theme.

The olive wood seat is another of The One's major highlights. Through a chance encounter, the guys from Titan met Rudi Garnweidner, a diehard Moto Guzzi aficionado and head of a woodworking shop in St. Georgen. Garnweidner got to work creating a bespoke wooden saddle that was partially hollow, allowing the wiring loom and other ancillaries to neatly remain out of sight. It also features “gnawed-out” cable leads and an adhesive groove on the underside, keeping everything incredibly tidy.

The small, handmade tank is built from titanium and wrapped in hand-tooled leather. It was decided early-on that the CB wouldn’t be painted Siebenhofer’s explanation for this was, “Paint is mass, whether it be sprung or unsprung.” Having said that, the builders did opt to give the Honda some lime highlights on the rims, mono-shock, and cam-cover.

On top of simply building some really cool bikes, the Austrians over at Titan have also found a cool way to use their expertise to enact some positive change in the world. Last year the shop created a bespoke Kawasaki 450 LTD—a best in show winner—that was auctioned off with 100 percent of the proceeds going to a children’s cancer charity. After the success the project had in 2017, Titan has opted to do it again this year. Anyone interested in donating or learning more can learn more about it on Titan’s website.