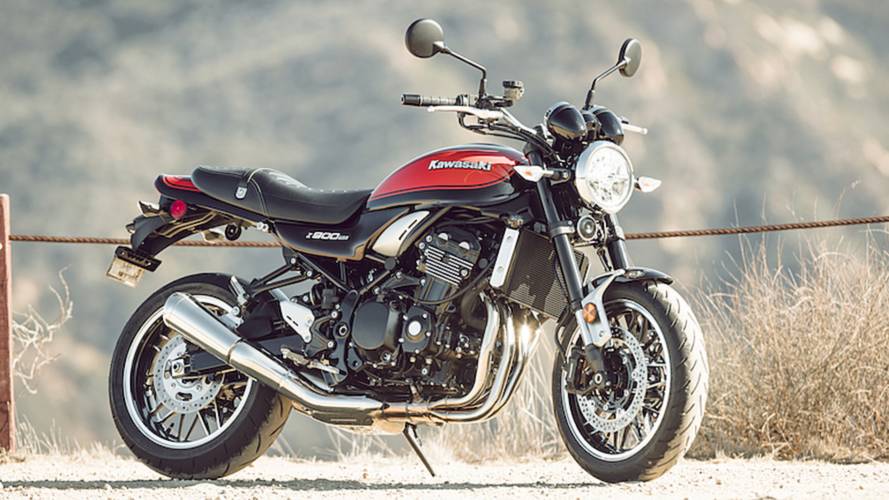 Kawasaki's retro-inspired 900 certainly has the looks, but does it deliver in the arena of modern performance.

Way back when, Kawasaki’s Z-1 900 ruled the roads in America. It was the rough and rowdy street bike that put the green team on the map versus its winged and tuning fork foes. Speed up to today, and the legend continues with a reborn version: the 2018 Z900RS.

READ MORE: Up Close and Personal With the Kawasaki Z900RS | RideApart

Kawasaki didn’t skimp on the details, adorning the RS with similar styling cues that made classics like it so popular – and then some. It is especially handsome in its rootbeer, aka Candytone Brown/Candytone Orange, paint job, which gives it a real retro flavor – until you throw a leg over it.

A genuine set of round face gauges and a more contemporary LCD give riders the best of both old and new.

The original Z-1 blew folks away with the acceleration, smoothness, and fun factor of its then-cutting-edge DOHC 903cc inline four engine. The RS recreates that experience with a 948cc water-cooled powerhouse that is classic Kawasaki to the Nth degree.

Smooth, torquey, and loaded with character, this ain’t no ordinary Japanese I4. In typical Kawi fashion, engineers precisely honed not only the engine’s aesthetic (complete with finned outer cylinders), but its fun-loving character and powerband, too.

Suspension performs well at a leisurely pace but could benefit from more sport aptitude when encountering your favorite set of twisties.

Around town, the engine is a sleeper. Power comes online immediately, yet is docile enough to make it friendly to ride. Although it’s a "big" bike, you don’t necessarily have to be a pro rider to wield its might. Clutch lever pull is two-finger light, yet retains quality substance when squeezed. Adjustable engine power modes are absent, but it does include two-way adjustable (and wheel-speed-sensor-equipped) KTRC traction control to help keep slips and slides at bay.

From tail to tip the Kawasaki drips in pure style.

Period-correct instrumentation sits outside of a negative LCD with white letters on a black screen. This ensures the display is readable in direct sun, as well as just plain looking cool. It’s also something different to the setups used by the competition. A handy gear position indicator, trip, and fuel economy functions are included as well. The gauges are set inside a bullet-shaped housing that further complement the RS’s terrific lines.

Attractive rims, sturdy radial-mount brakes and an inverted fork offer a tough stance at a standstill.

During our brief day ride, we rode in the least restrictive traction control setting (Mode 1) with no ill effects on dry, sun-soaked pavement. The electronics have enough logic to allow for wheelies – which the torque-rich four-cylinder willingly provides. Fuel mileage-wise, the computer displayed a low 40s average during our casually paced ride with frequent stops.

The engine incorporates an octet of electronically controlled throttle body valves to deliver a precise throttle response that generally works well. Initially, things are a tad overly sensitive, especially in first gear. However, after a few miles you acclimate to the the feel and response of the twist grip.

The RS is powered by a liquid-cooled 948cc Inline Four engine that’s loaded with torque and fun-loving charisma.

Get some speed beneath you and the RS is a joy to ride. At upwards of 5000 rpm, an euphoric intake roar erupts from beneath the shapely 4.5-US-gallon fuel tank. It’ll make you feel like the devil is chasing you, urging you to twist deeper on the right wrist just for the thrill of it. The note bellowing from the Kerker megaphone-like pipe is also pleasing, albeit a tad muted compared to the raucous intake. Together, the track is music to a motorhead’s ears making for an exhilarating experience, especially in the twisties.

Regardless whether you like old bikes or new ones, you’re going to appreciate the lines of the 2018 Z900RS.

The riding position and ergonomics in general are well suited to day-to-day street riding. Neither demanding nor too lax, it’s a comfortable position for tall and short, skinny and fat. The saddle itself cups your bottom nicely, keeping the rider in place during acceleration and braking maneuvers.

Look the part, live the dream— you’ll do both aboard the Kawasaki Z900RS.

The handlebar is big and wide, and can easily be swapped for an aftermarket setup if the stock ones aren’t to your liking. Kawasaki offers 16 accessories including a center stand, shorter seat, and grip heaters, if you want to tweak it and make it your own – all while complementing the factory one-year warranty.

Although a little older in terms of architecture, the Z900RS’s engine is a gem proving smooth, fun and powerful.

On the street, the RS delivers a smooth ride. You could say the suspension is a tad squishy, but for leisurely rides across town it performs well. Up the pace on your favorite stretch of turns, however, and things get a wee bit bouncy. Fortunately, the suspension includes spring preload and damping adjustment front and rear. Slowing the compression and rebound settings did calm down movement, but it would have been nice if engineers complemented the Z900RS's punchy engine and sleek aesthetics with elevated sport handling prowess. After all, it is a Kawasaki.

Even still, and despite weighing almost 472 pounds, the motorcycle carries its weight well –

proving maneuverable, and stable in a straight line. The Dunlop Sportmax GPR-300 tires provide capable grip and have a neat tread pattern that suits the look of the machine.

The ABS-enabled triple disc brakes are capable and friendly to use. We appreciate that the front brake lever, as well as the clutch lever, offer position adjustment. Feel and overall brake sensation is well-sorted and easy to master. The ABS programming is on the more conservative end of the spectrum, but it works as advertised.

Ergonomics are comfy and well balanced for all-around riding.

The Z900RS follows in the tread marks of its legendary-for-its-time father, the Z-1. It boasts a captivating I4 that’s as playful as it is easy to control. Styling remains true to the Z-1’s roots – appeasing those that love the lines of a classic bike, while simultaneously meeting the visual desires of a person looking for something new. Whether you want to reminisce about the past, ride in the present, or dream about the future, you’ll likely find a piece of what you’re looking for in the new RS.

Attractive from every angle - Kawasaki’s Z900RS is certainly a looker. And it rides as well as it looks.