Video of the Day: Z1000 Rider Slides Under Semi 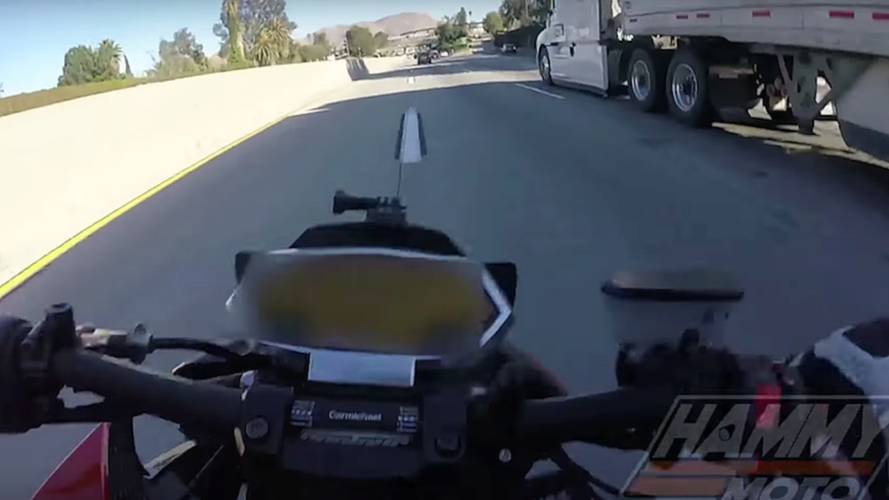 Among the many deep-seated fears riders have while in the saddle, sliding under a tractor trailer on the highway at speed has to be near the top.

There’s getting lucky, then there’s this guy…

With the prevalence of GoPros and other action cameras, more and more of the world’s craziness is being captured on film and shared online everyday. Today’s video comes to us from Instagram/Youtube user “Hammy Moto”, a California-based moto-vlogger. While the majority of Hammy’s uploads are pretty run of the mill, the same can’t be said for the minute-long clip he posted yesterday on social media, showing him slidesliding under a moving semi-truck on the freeway after going down, miraculously escaping unscathed.

The video starts just prior to the accident, with a violent tank-slapping speed-wobble that sends Hammy and his orange, 2012 Kawasaki Z1000 down onto the pavement, headed right towards an eighteen-wheeler. The rider becomes separated from his bike and somehow manages to slide under one side of the moving trailer and then safely exit out the other, safely coming to a stop on the shoulder...somehow.

“‘I’m very lucky to be alive," he said on YouTube. "I slid through a tiny gap between the trucks rear tires and the trailer stand. If I was going any slower or faster, I wouldn't have been so fortunate. The only injuries I got were a very small amount of road rash on my knee and hip, nothing broken. I'm very blessed.”

I will point out that I feel the way the video was edited was very much intentional on Hammy’s behalf. Not only does the video start just prior to the accident, leading me to believe he was probably doing wheelies or something and came down wrong at a high speed, but he has also blurred out the Kawa’s instrumentation (I noticed that too, and I call shenanigans -JM). So, you know, draw your own conclusions from that.

STAR: Watch A Guy Crash a Ninja, Then Donate Your Money Elsewhere