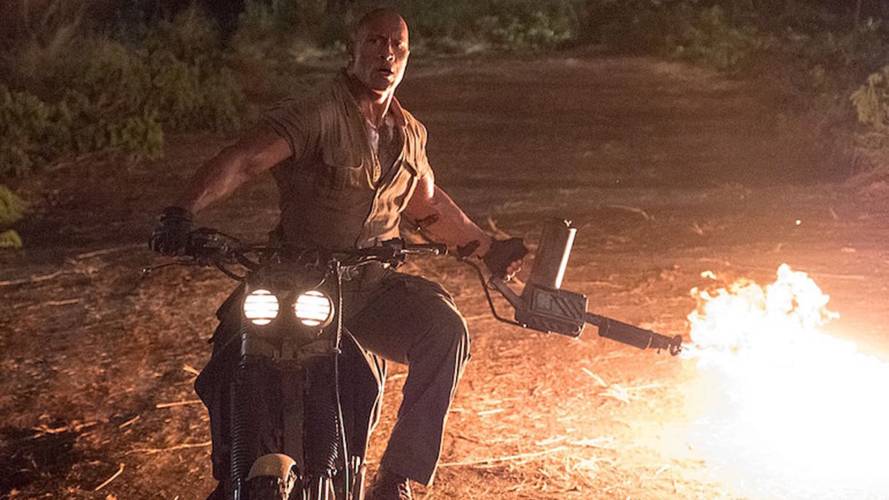 Flamethrower wielding Dwayne 'The Rock' Johnson riding a modified DRZ400 and other cool motorcycle shit from the new Jumanji film, Welcome To The Jungle.

When Chris Van Allsburg wrote the famous children’s book Jumanji in the early 1980s he probably wasn’t anticipating a film-adaptation that included an ex-professional wrestler wielding a flamethrower on a motorcycle, but alas it's 2018 and things that make sense are seemingly going the way of the dodo. While I imagine the academy will fail to recognize the second installment of the Jumanji film franchise in any capacity, the upcoming Dwayne "The Rock" Johnson film does possess some redeeming qualities. Yes, that includes a generous amount of motorcycle action sequences featuring some pretty snazzy custom dual-sports and scrambler-type machines.

Motorcycles appear to get a decent amount of screen time throughout the two-hour sequel to 1995’s Jumanji (which scared the hell out of me as a six-year-old, everything was trying to kill you), and it appears film-makers placed a substantial amount of importance on doing the motorcycle sequences “the right way”. Jerome Chen, the overall visual effects supervisor on Jumanji 2: Welcome to the Jungle explained how some of the motorcycle scenes were accomplished.

Did you see? Ant-Man Trailer Gets Triumph Thruxtons

“The close-up reactions were shot with Dwayne Johnson on a greenscreen stage, and the motorcycle was placed on a motion base, so it could be pitched at a 20 degree angle, since the motorbike was ascending up the spine of a jaguar statue,” explained Chen. “For the wide angles of the bike traversing through the rocky terrain, we shot that in California, in Santa Clarita (just north of Los Angeles). We had a professional motocross biker ascend this almost 50 degree angle hill. We made up obstacles for him to ride, to zig-zag through. And then later, MPC basically matched me and roto-ed this rider out of that plate and placed it into a full cg environment and made it for the appropriate time of day.”

Jumanji 2 sees the “bad guys” utilizing an array of modified dual-sports and scramblers –complete with aftermarket lighting and crash-proaction– but the film’s main bike, the one piloted by the Rock, appears to be a customized Suzuki DRZ400, sporting an aftermarket headlight setup, a custom stitched leather saddle, and a front fender that’s way too close to the knobby, just to name a few of the mods. The first Jumanji movie did indeed include a motorcycle scene, albeit an extremely brief one, with monkeys, but a motorcycle scene nonetheless.

Last year “The Rock” posted some behind the scenes photos of the aforementioned greenscreen set, as well as a shot of him showing off a custom made harnessed flamethrower, along with the admittedly amusing quote: “Check out this bad ass custom made flame thrower that’s secured with metal grips under my forearm giving me more leverage to drive my motorcycle with one arm – and kill evil shit with my other.”

It’s been cool to see so many scoots in major motion pictures these days, from The Avengers franchise, to Star Trek, to Deadpool, to the recent Ghost in the Shell film, two-wheelers are becoming increasingly common in blockbuster productions. As new filming technologies evolve –such as motorcycle mounted cameras that self level to the horizon (a la MotoGP on-bike cams) and the use of electric bikes to reduce sound and vibration– motorcycle sequences have become easier and easier to capture on film, prompting more and more productions to utilize two-wheelers. Like I mentioned at the tail end of the article about the Keanu Reeves ad a few days ago, whenever motorcycles get mainstream exposure, I say it’s a net positive for us.

Next up: 10 Motorcycle Movies You Haven't Yet Seen