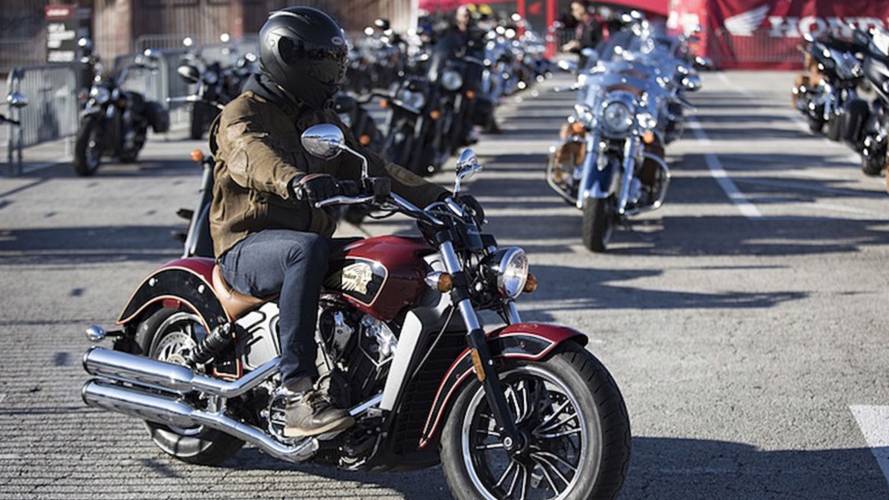 Indian releases schedule for its own attractions during the 77th annual Daytona Beach Bike Week.

Indian Motorcycle just unveiled its schedule for this year’s upcoming Daytona Beach Bike Week with aims at establishing an even greater presence at the annual festival. The company is offering test rides of its 2018 models, showing off various custom builds, and all new for 2018 is a special event exclusively for members of the Indian Motorcycle Riders Group. Daytona Bike Week is also holding the season opener for the American Flat Track series which will see the return of the current champion and Wrecking Crew luminary Jared Mees along with Brad Baker and Bryan Smith.

With the exception of a half-decade off during World War II since all the riders were overseas shooting Nazis and dodging kamikazes, Daytona Beach Bike Week has been a stable of motorcycle culture since 1937. What started as race enthusiasts traveling to Florida for the iconic Daytona 200 eventually blossomed into ten-day-long festival of motorcycles, music, motorcycles, racing, customs, camaraderie, motorcycles, partying, and other miscellaneous activities. (Also, I assume, some motorcycles? -JM) With roughly half-a-million attendees every year, it’s important for OEM’s that cater to Bike Weeks demographic to have a presence there during the festival.

Leading the Pack at Bike Week

Continuing the brand’s affiliation with MX icon turned cruiser-enthusiast Carey Hart, this year's Indian’s display includes several of Hart’s Chieftain builds. Indian also plans to display a handful of bespoke Scout Bobbers originally unveiled at the Brooklyn Invitational, plus the Scout FTR1200 custom and the AFT championship-winning Scout FTR750. Both of these latter bikes will be available for photo ops.

America’s oldest motorcycle company’s display on Main Street also includes its dealership which will be open daily. The Polaris-owned outfit will also show off a one-off build from Klock Werks Kustom Cycles, as well as unveiling a new limited-edition model that may or may not be related to the Klock Werks build in some capacity.

Indian also plans to offer anyone with a valid motorcycle endorsement the opportunity to demo multiple current models, giving riders a chance to pilot several different bikes to get a better sense of what’s what. The demo rides themselves will be held at the Daytona International Speedway, though I’m uncertain as to whether or not the actual test rides will be conducted on the famous circuit or just outside or alongside it or something.

In addition to all that goodness, an exclusive event will be held from 10 a.m. to 2 p.m. on March 15 for members of the Indian Motorcycle Riders Group. Group members will get a chance to take a behind-the-scenes tour of the iconic Daytona International Speedway and explore the pits, paddock, and of course the track itself. The tour will be followed by a meet and greet with the 2018 Indian Wrecking Crew race team. Members will also get the added perk of free VIP parking and complimentary tickets to the Daytona TT. For more info on this, check out the IMRG website.

For more info, time, and dates, you click here to view full details on the Indian Motorcycle website.