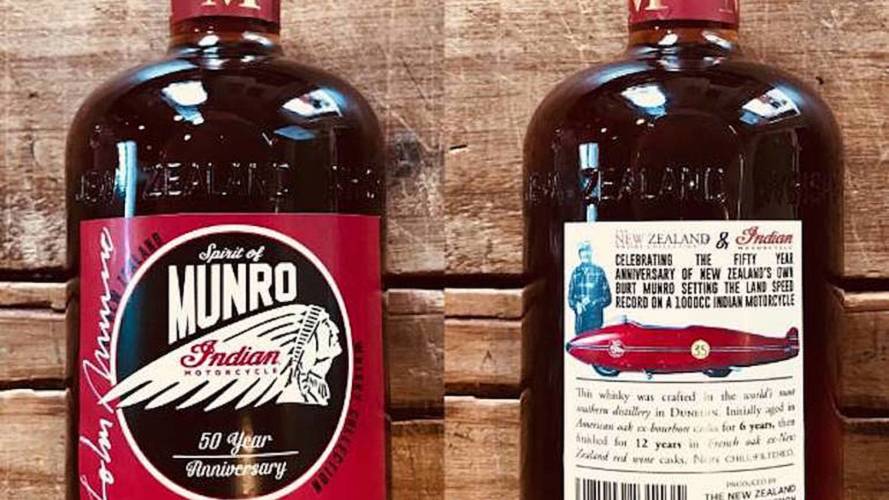 New small batch of whiskey honors the legendary land speed racer with exactly 953 bottles being sold at $184.71 each. They may already be sold out.

Motorcycle enthusiasts seem to love making Burt Munro tributes, be it gas-powered or glass-bottled. The latest incarnation takes the form of a special small batch run of whiskey honoring the landspeed legend. The endeavor came to be after Burt’s son, John Munro met Grant Finn while attending one of Finn's private cask launch and tasting events at The New Zealand Whiskey Collection in Oamaru. After discovering their shared love for two-wheelers and whiskey, the two started making plans that utilized John’s connections with Indian and Finn’s contacts in the top-shelf spirit industry.

Indian –seemingly a little bit reluctantly– agreed to the project upon the condition that it was only a one-off endeavor. So it officially got underway, with a cask being selected and the number of units being set at 953 bottles –the displacement (in cc’s) of Munro’s famous bike. It was also decided that the whiskey would be reduced down to 50 percent alcohol by volume, celebrating the half-century anniversary of Munro’s under-1000cc world record, in California, on August 26,1967. The price was also set at a rate of $184.71 per bottle, with the price being a reference to Munro’s  record speed of 184.71-miles-per-hour.

In addition to the whiskey, John has organized a public auction that will see various Munrobilia sold off with all proceeds then going to the Riverton Coastguard. The longtime world-record holder’s son has managed to garner some support from the likes of Indian Motorcycles, E Hayes & Sons, Meccaspresso, Invercargill City Council, Venture Southland, and Bill Richardson Transport World. In addition to various memorabilia and Indian apparel, the auction will see the 35th whiskey bottle made being auctioned off, with the significance being #35 was Burt’s number. John will be autographing the bottle as well.

When John and Finn released an announcement on Facebook advertising the limited edition tribute whiskey, the post was flooded with well over 100,000 views, and reportedly several hundred orders being placed, all in the first week. I’m personally curious to see how much this sub-$200 bottle of whiskey ends up raising when it hits the auction block at the whiskey’s launch during the Burt Munro Challenge tonight from 8:00 to 9:30PM at Motorcycle Mecca.

Oh yes, this is real too: The Great Whisky (or Whiskey) Ride