That Motorcycle Column: Fast on a Sliding Scale 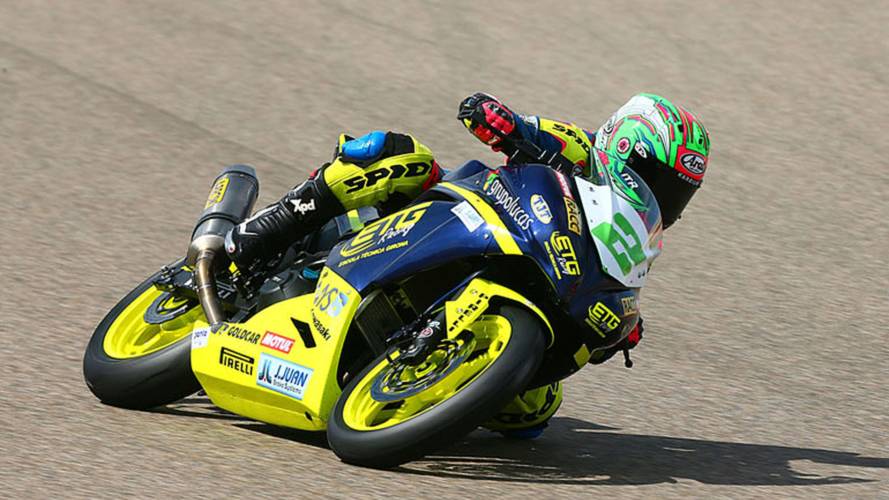 In this month's That Motorcycle Column, Pete waxes philosophic about speed on the street and track, what it means, and how to achieve it.

Wherein we talk about speed, what it means, and how to get it

Some riders are faster than others, though this is not a fixed value. Fast isn’t forever, and neither is slow. It’s a sliding scale and the reasons why every rider is where they are on each side of that scale varies. I have been on both sides of those scales, but never at the bottom or top of either. Even at my fastest I once had a pro racer pull in behind me on pit lane during a school that used Kawasaki 250s, and ask me if something was wrong with my bike. That was just mean.

Recently, while riding at an introduction of a new motorcycle, I noticed that one rider in our group was struggling to maintain pace with the leading rider and a few other journalists in the group. Our group consisted of six moto-journalists plus the leader who set the pace. Unlike the rider struggling to ride at that pace, there was another rider in the group who was slow, and he didn’t fight it. He rode behind all others and enjoyed himself, was always in control of his bike, and none of us had any issue waiting for him at places where there was a possibility of him losing track of the route. I respect that rider completely, and do not question his choices or abilities. That’s none of my business. There’s a huge difference between struggling to be quicker and being slow—one is much riskier than the other.

Is it fast enough?

I had not noticed the struggling-to-go-faster rider on the first day of riding because I had slotted in behind our leader and held position within first or second journalist for the day. When we came to stops the group pretty quickly came together, save for waiting for the slow rider. On the second day I chose to lay back and pick up the rear though, and that's when I noticed struggling rider.

Okay, I didn't stay at the back. After few miles I passed the slow rider because It’s just not possible for me to ride at his pace. Ever. Some of us are just wired differently. I don’t even hike at a moderate pace. Years ago I made a promise, with God as my witness, that when I’m an old dude I will drive cars faster than I do now, just to make sure no kids can insult me for holding them up. So, since I'm nearing the end of life, why waste time?

After passing the slow rider I chased the group down, which is when I noticed that the first rider I came up to was blowing a bunch of curves. He often entered them too fast because we were too far behind the next forward bike for him to get a gauge of how much to slow down. Then, after we would stop he would struggle to keep up with the bike in front of him, fall back a bit, and start blowing the curves, crossing the double yellow at times on right-handers. Blind right-handers.

After the day’s riding he told me that he had never ridden so hard before in his life. I kinda knew that and I told him to never do it again and get his butt to a track school. He then asked how hard I had been riding on a scale of 1-10. I said that I was riding at about a 6, and that at anything less I just wouldn’t be paying attention. He then admitted he’d been riding at 10 for two days. Yikes.

Track with a view

Without any formal sport riding schooling, this rider’s apparent approach to going faster reminded me of what I did before I attended riding schools. The process I had used to try to go faster was nothing more than trying to go faster. I mean, if anyone had asked me what I was doing to become faster, I would have said, “I’m doing everything faster.” I just figured that if I did everything faster that would make me faster. Right? Isn’t that how math works; faster plus more faster equals a larger amount of faster? No?

FOR ME: Perpetual Motion - Embracing Your Inner Motorcycle Self

Well, that doesn’t even work if you’re going in a straight line on a drag strip. Faster is like dribbling a basketball while running, it’s a complicated set of skills that transform and become the rider. It’s an existential question of being. That pro racer who I mentioned at the beginning, who I had told that my motorcycle had nothing wrong with it, asked me to follow him around the track for a couple laps, which I did. Until those laps I had felt like I’d conquered that track and was whipping the little Kawasaki 250 underneath me for everything it had. Not even close.

Maybe I needed a smaller bike?