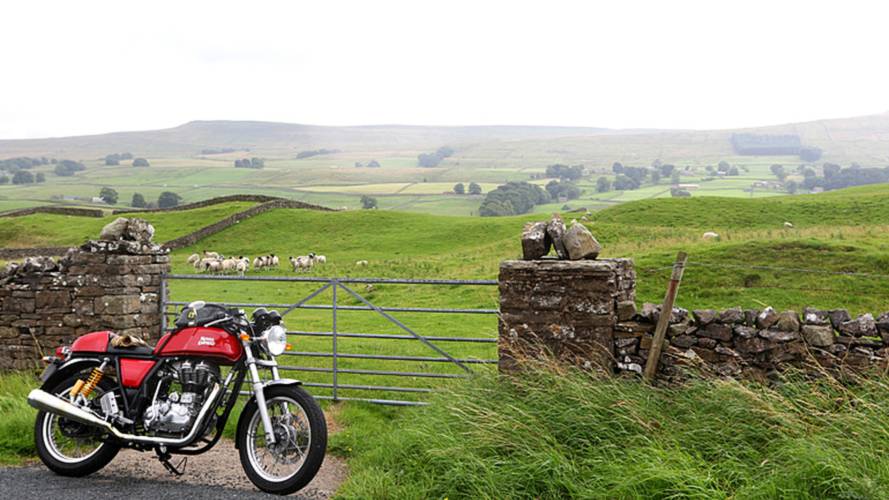 In another episode of "god laughs while Justin and Kyra plan", Justin is forced to ride 2,000 miles around rainy England on a Royal Enfield Continental GT.

When we planned to ride Royal Enfields around England, our intention was to take a pair of bikes that could carry an equal amount of luggage so we could share the burden of gear and goods. We intended to take camping gear and spend a few nights in a sleeping bag that’s too small for the two of us, laying beneath the stars in a farmer’s field somewhere. But then there was an email.

“Unfortunately, we can only offer one Bullet 500. The other bike we can provide is the Continental GT, our Café Racer.”

As much as I like the look of the Continental GT, it wasn’t my first choice when planning a multi-thousand-mile motorcycle journey. I'll be honest though, I was a little excited to get some seat time and comfort be damned! That said, when we received this email we scrambled to find the closest Royal Enfield dealer to test fit the Wolfman Luggage we had planned to pack. Alas, the GT wasn’t able to carry the load we had hoped. We did manage to secure a Skyline Tank Bag, which proved to be a most beneficial addition. That’s not the point of this post, though. I’m not here to tell you about what went wrong, I’m here to tell you what can go so, so right. That touring on a Café Racer is possible. No! Touring on a Café Racer is not just possible, it is fun.

The first time I rode the GT—ever—was after we had secured the aforementioned tank bag, zipped up our jackets, turned on our SENA headsets, and set off from the Royal Enfield dealer in southwest London. My first impression? How the hell am I going to ride this nearly 2,000 miles in twelve days? Also, how am I going to stand up straight afterwards, or for that matter, the rest of my life? Thankfully, by the time we hit the small coastal town of Portsmouth, our first stop on this endeavor, I was relieved to find both my back and my behind to be in quite good shape. Our bikes drew a crowd outside of the small pub we parked in front of.

“My father had an Enfield,” one pensioner chimed. “Looks just the same as it did when I was a kid.”

We stayed next door at a bed and breakfast for the seagoing type, some kind of maritime club meets mini hotel. We ate and drank at the pub, our Enfields parked out front, lit by a gentle street lamp, waiting patiently for our return.

Our itinerary took us from the southern coast of the island, up and east toward Brands Hatch where we were to take in a round of British Superbike (BSBK) racing. My little café racer was ready and eager for our ride, firing to life and expelling a delightful sound from its megaphone style exhaust system. To ride a café racer style motorcycle with clip-on handlebars and sort-of rearset controls any great distance is tasking not on the body, as I learned from our first day’s ride, but on the mind. With my tank bag mounted beneath me, and my cell phone slid into the clear map sleeve on top relaying directions, I was tasked with not only negotiating English traffic, road signs, and M motorways, but also not dying when I looked down to make sure we were going the right way. The mental juggling between self-preservation and staying on course was exhausting at times.

What about the bike, though? Oh, the bike was wonderful. The 500cc single cylinder engine thumping feverishly to keep up with traffic, its long fuel tank stretching me out, and tucking me tight—streamlined, aerodynamic, old school. We made our way to the race track and watched idiots ride wildly powerful things at crazy speeds in circles. Then, we turned our Enfields north and motored our way to the ancient town (village, city?) of York.

Again, the Continental GT proved itself a worthy competitor for English motorways and windy, two-lane roads. Also, roundabouts. Did I mention how many there are in England? Like, everywhere. A roundabout leading to another roundabout. It took a little getting used to, but by the end of our trip I was eager for the next one, an opportunity to lean my little café bike over and pretend like I’m Giacomo Agostini.

From York, we headed further northeast toward the Lake District, a part of England known both for its natural beauty and its rain. And man did we run into some rain. From a light sprinkle to torrential downpour, the Lake District tested both our abilities, and the bikes'. And in the end, both survived with a smile as we made our escape a few days later.

While it’s certainly not ideal for traveling long distances, not the most comfortable arrangement for eating miles, or the best at handling long stretches of fast, open highway, my GT was nothing like I expected it to be. With my beloved Colfax Design Works backpack full of clothing and accouterments, and my tank bag packed with passport, phone, camera and other necessary equipment, the Enfield was more than capable of taking me all around the island. Also, honestly, I had a lot more fun riding it than I would have on something more substantial or “appropriate.” That's because everywhere we went, the café racer I was riding would instigate a comment, then a conversation. Curious, people would ask why I was riding something like that for so many miles, or others were excited to tell me about their experiences with the infamous Royal Enfield.

It opened doors and created connections we might have otherwise missed. It was also tons of fun to ride. The brakes were more than adequate, the horsepower, albeit limited, was enough to pull me and my stuff some 2,000 miles with a smile on my face. The riding position, while somewhat aggressive, turned out to be largely okay, leaving me with functioning wrists, back, and buttocks.

So, the next time someone tells you that you can’t tour on your café racer, question their logic, and ask them when the last time they rode something like that for so many miles was. I bet you’ll find they haven’t, likely since someone told them they couldn’t. So, you should. I had. And it was an experience I won’t ever forget. Because experiences are something you forge for yourself. If not, how else could you know what you’re capable of?