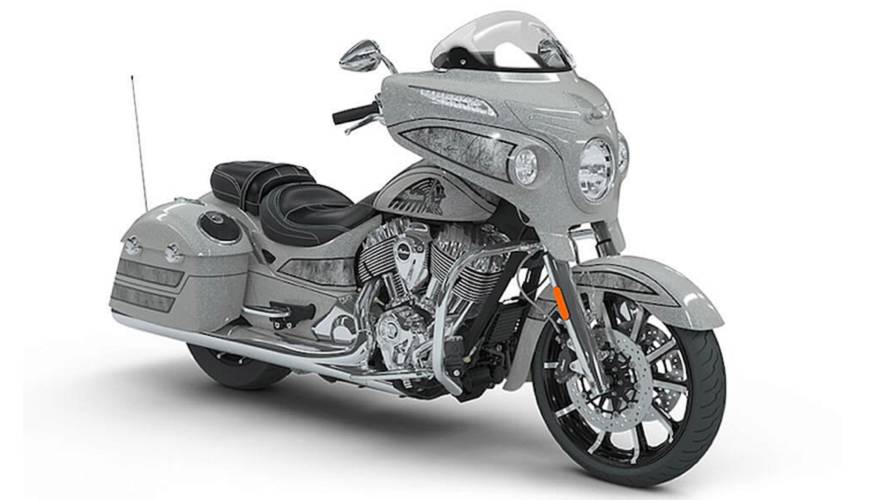 In an effort to add a little extra exclusivity to the already exclusive Chieftain bagger, Indian Motorcycle just rolled out the hand-painted LE Elite model.

Last April Indian Motorcycle released the 2017 Chieftain Limited Model and it quickly became the marque’s best selling bagger model ever. So when 2018 rolled around, the company was left scratching its head trying to find a way to outdo themselves. How do you take what’s already a wee-farkled bagger and raise the stakes even further? You give it a high-end, hand-done paint job!

The fancy new livery consists of hand-painted, high-flake Black Hills Silver inspired by the silver mines of South Dakota’s Black Hills. Each 2018 LE Chieftain Elite is hand-masked and graphics are laid down before being sprayed by hand by the team at Indian's custom paint facility in Spearfish, South Dakota. According to this morning’s press release from Indian, just the paint on each bike alone takes more than 24 hours of labor.

“Whether cruising around the city or touring the country backroads, the 2018 Chieftain Elite delivers on its promise of being the best bagger that money can buy,” said Indian's Senior Director of Marketing and Product Planning Reid Wilson. “This bike was born to turn heads and provide an unmatched riding experience with all of the premium amenities included.”

As one would expect on a flagship bagger like the Chieftain Elite, the LE model is brimming with amenities such as a 200-Watt premium audio system, Pathfinder LED headlight and driving lights, a push-button power flare windshield, billet aluminum Select Driver and Passenger Floorboards, and plush genuine leather seats designed for long hours in the saddle. The 2018 LE also sports smaller hand controls that Indian says enable better ergonomics, as well as new pinnacle mirrors.

At the heart of the new bagger is Indian’s award-winning Thunderstroke 111 V-Twin. To spruce up the Thunderstroke, Indian offers a wide range of factory performance parts such as the Thunderstroke 116ci Stage 3 Big Bore Kit which supposedly adds 20 percent more horse-power and 15 percent more torque. Obviously Indian also offers a full parts and accessories catalog for personal customizations and cosmetic tweaks to make the bike your own.

While Indian’s press release didn’t specific a production number, it did say that only a handful will be built. Prices on the 2018 Indian Limited Edition Chieftain Elite start at $31,499 in the US, and $37,999 in Canada. This new model will roll into showrooms on March first. For more info you can check out the page on Indian’s website.