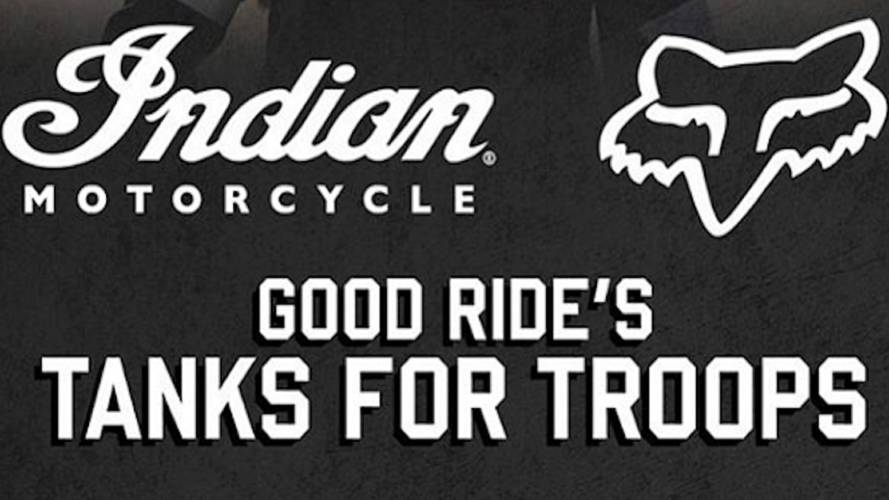 Hart's Good Ride organization teamed up with Fox, Indian, and the Infinite Hero Foundation to auction to raise money for wounded vets.

Since retiring from professional motocross, Carey Hart has kept himself pretty busy. Back in Spring of 2016 the husband and father started Good Ride, a 501c charity motorcycle rally that donates 100 percent of the funds raised to the Infinite Hero Foundation. After a successful inaugural ride, Hart organized more charity 'Good Ride' rallies in different parts of the country, raising tens of thousands of dollars along the way. The tattoo enthusiast’s newest Good Ride endeavor took things in a slightly different direction. Instead of a motorcycle rally, Hart organized a charity auction selling a collection of hand-painted Indian motorcycle gas tanks.

IT AIN'T ME: Hero's Ride of a Lifetime Selectees Announced for Sturgis

Hart partnered with Indian Motorcycle and Fox Racing, the latter of which allowed its Irvine, California, headquarters to be utilized as the venue for an industry party showcasing the two dozen custom-painted tanks and a handful of customs, including several Roland Sands builds and some of Hart's personal machines. Hart's involvement in the tattoo scene enabled him to round up some noteworthy artists who all agreed to donate their time and work for the auction. The Indian tanks were then auctioned off individually online, ultimately generating around $30,000 for the IHF.

”The measure of our impact is positive outcomes, not merely gestures,” a press release from the IHF stated. ”We will marshal the resources of technology, community, medical research and mental health care to foster collaborative innovation and affect positive change for our heroes in need.”

One of the customs on display that night.

I AIN'T NO: We Catch Up With the Veterans Charity Ride

To understand what the ‘Infinite Hero Foundation’ does, it helps to know the story of Gary Linfoot. A retired U.S. Army officer with 5,000 flight hours and 1,200 hours of combat operations to his name after serving in Iraq and Afghanistan, Linfoot was a member of the Army’s elite 160th Special Operations Aviation Regiment. In 2008 Linfoot was on his 20th combat mission while in Iraq when a helicopter crash resulted in the loss of both of his legs.

Since the crash, Linfoot has turned into a pioneer in the high-tech and cutting edge use of Ekso Bionics exoskeletons for paraplegics. Thanks to a six-figure grant from the Infinite Hero Foundation, Linfoot became the first-ever recipient of one of the trick medical gadgets in 2013. With the device, Linfoot was able to participate in a year-long mobility study to help further the development of the technology. There’s a Youtube video about Gary Linfoot and his story for anyone interested in learning more.

Hart, his wife, and their daughter.

Though the auction has already ended, you can still donate to both Carey Hart’s ‘Good Ride’ by clicking here or the ‘Infinite Hero Foundation’ by clicking here. Contributions are 100 percent tax-deductible too. You can click here to check out all 24 of the custom hand-painted tanks from the auction.