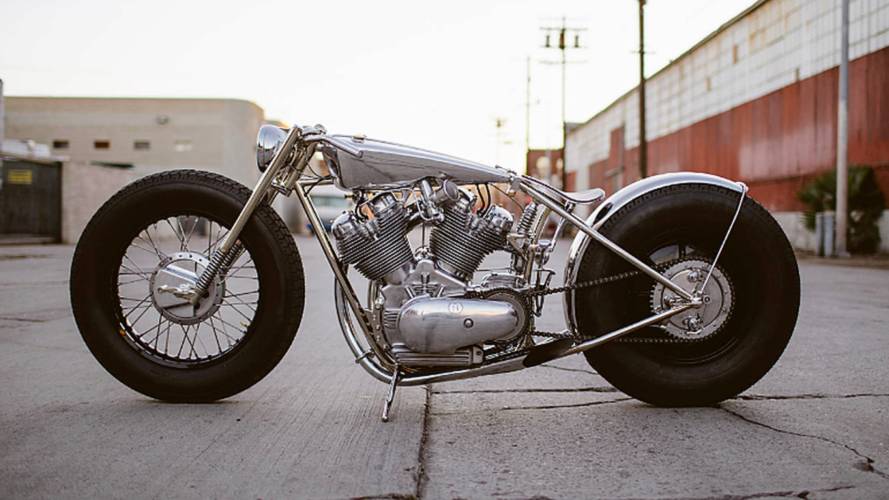 Never one to rest on his laurels, Max Hazan rolls out the Musket II, an updated and redesigned version of his award-winning Musket custom.

Despite being on the scene for just a handful of years, Max Hazan has made a name for himself as one of the world’s top builders. He's done so by churning out exquisitely detailed, one-off motorcycles built from dozens of individually designed and machined components. Aside from the engine and parts of the wheels, every single part on a Hazan Motorworks build is a bespoke handmade piece. For this reason, each one of the elite customs that come out of Hazan’s small Los Angeles studio is wildly unique and expertly crafted. Hazan's ability to blend form with function is simply astounding, and the award-winning builder’s most recent two-wheeled masterpiece, “The Musket II” is no exception.

A closeup look at the liter-sized Musket engine.

While until now Hazan has never produced more than one of any bike, a request from a customer lead to him building a second “Musket”. Luckily for us, Hazan was kind enough to invite RideApart to his studio while he was working on this build, giving us a firsthand look at exactly what goes into building a Hazan Motorworks machine.

Hazan’s process is very organic. He starts by placing an engine on a cinder block in between a set of wheels. From there he draws out the frame and tank until the design comes together, working at a one-to-one scale. A corner of his shop is occupied by various metal rods and cylinders, such as the .125” chromoly steel used to create the build’s one-off chassis. Hazan turns that collection of metals into the bespoke pieces that make up his machines. Because so many individual knickknacks are designed and made by hand, every inch of his bikes have to be thoroughly calculated and considered.

Max Hazan chipping away at the long process each one of his machines requires.

The ex-contractor—who has won three Bike of the Year awards from PipeBurn—is constantly looking for new ways of doing things. On the Musket II, Hazan opted have the build’s brakes controlled via side-by-side foot-pedals on the right side of the bike - with the inner pedal operating the front brake and the outer engaging the rear. While the entire bike is absolutely gorgeous, one of my favorite features was the left foot peg. Hazan ingeniously created a system that allows the left foot peg to pivot 180-degrees, enabling it to be used as the bike’s stand. So cool.

Like the foot-peg/stand, many of Hazan’s ideas are done in an effort to minimize clutter and keep each build as clean as possible. The dual handmade aluminum gas tanks consist of one dummy unit which houses the bike’s battery, coils, and regulator, while the other boasts a cutout on the bottom, making room for a protruding carb. Custom exhaust pipes were crafted for the build before being fitted to the 55hp 1,000cc Musket V-twin—which is essentially a pair of 500cc Royal Enfield Bullet singles married together and bolted to a Bullet transmission. The use of copper tubing in the place of traditional lines pairs well with the rest of the build’s top-shelf design language.

The execution on Hazan's bikes is just remarkable.

A jockey-shifter was also added, sprucing up the bike and giving it a little more distinct character. Because the left foot-peg doubled as a kick-stand, Hazan needed to find somewhere else to put the foot clutch, which is how he landed on the jockey-shift-lever. Another noteworthy highlight on Hazan’s second Musket build is the rear drum brake linkage. Because he was unable to work out a design for a solid linkage that met his ridiculously high standards, Hazan opted to use a cable setup that came out really clean. The seat itself is another one of my favorite aspects of the Musket II. The handmade unit is made up of several pieces that fit together in a puzzle-like manner. Despite the thin saddle being asymmetrical, the offset design looks fantastic - and allows everything to fit.

The front and rear brakes on the "Musket II" are controlled via side-by-side foot-pedals.

The entire front-end of the Musket II is pretty ridiculous too. There is so much going on, and though it sounds contradictory, a lot of work was done to make it look like no work has been done. The throttle assembly was internally routed through the fixed handlebar which is welded to a handmade headlight unit as well as the triple tree. Below the headlamp is a Hazan-designed fork which uses large brass bushings and exposed springs. Being the perfectionist that he is—you kinda have to be when your bikes sell for six-figures apiece—Hazan experimented with dozens of designs before landing on the setup you now see.

It's all about the small details.

The same goes for the build’s wheels. The rear wheel went through a number of versions before Hazan settled on the solid “hot rod wheel” Hazan sourced from Summit Racing. Before wrapping the wide wheel in Excelsior rubber, a one-off drum was machined in house from bars of 6061 aluminum to house the two right-side bearings and the five studs that run through the wheel in a five-stud car-like layout. The front wheel is a 19-inch 40-spoke rim (also wrapped in Excelsior rubber) fitted with what was once a rear-hub off a Honda, prior to being reworked by Hazan to fit the front wheel. A wide rear-fender was also crafted that now closely hugs the rear car tire, tying together the bobber aesthetic.

Hazan Motorworks' Musket II: a project six-months in the making.

With the success of his prior builds, there is a lot of pressure on Hazan to constantly outdo himself. Despite always setting the bar ridiculously high, Hazan has nonetheless been able to deliver time and time again. It was also really cool to see the project in person in its earlier state, as well as in its current completed form. As great as Hazan's work looks in photos, seeing it up close allows one to appreciate it that much more. With so many bobbers being built today, you really have to do something special to stand out. Fortunately for Hazan, that’s exactly what he’s got here with the Musket II.

A look at the custom rear wheel setup.

Hazan’s acute attention to detail, combined with his expert execution makes for some truly exceptional one-off motorcycles. His old-school methods are incredibly time-consuming, but cutting corners wouldn't allow for the same level of results. With each of his build’s components requiring hundreds of hours of machining over the course of the roughly six-months it takes Hazan to complete a single project, it’s probably not hard to see why the Musket II has earned its place as this week’s Bike of the Week, and then some.

Car tires may not offer the best performance, but they look pretty damn cool.

Special thanks to Max Hazan.

Shop photos by Tim Huber, professional photos by Shaik Ridzwan of the The Mighty Motor