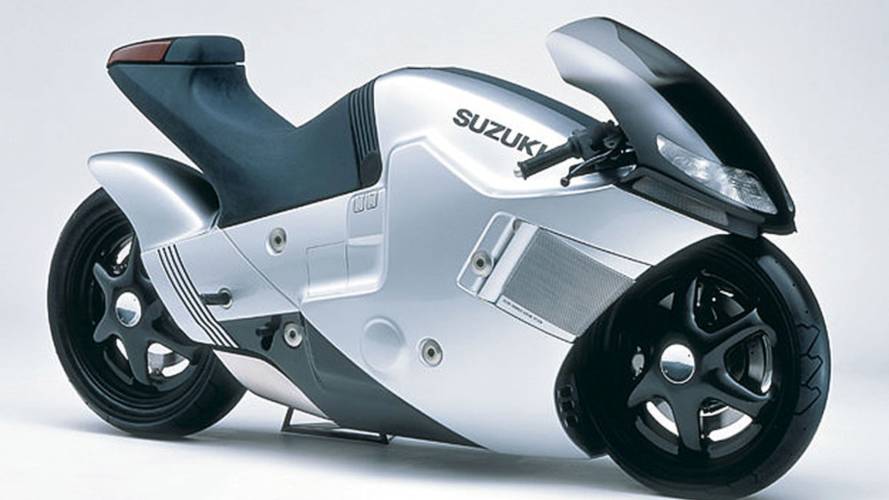 Hey, you guys ever heard of the Suzuki Nuda? That's okay, not many people have. I certainly hadn't until this morning, when a colleague dropped a picture and some info into a private nerdy Slack channel we use to talk about video games and giant robots. Just look at it, isn't it gorgeous? It's the platonic ideal of every sportbike in every piece of 80s cyberpunk media ever produced—full bodywork, aggressive stance, looks like an anime, even a front swingarm and hub-centered steering, a technology that was de rigueur on futuristic bikes in that era.

IT NEVER: That Time Lamborghini Built a Motorcycle

Okay, so, we have the pictures, but what's the deal with the Nuda? I'm glad you asked! Unfortunately, since it was a one-off concept built thirty-some years ago, there's precious little Nuda info floating around out there. What I did find out sounds extremely cool and makes me wish Suzuki had put it into production, even as a limited edition or something. Since information is so scarce, I'm going to forego my usual deep dive into the history and engineering behind the Nuda. Instead, I'm going to give you the basics so we can concentrate on drooling over the pictures. This is gonna be short(ish) and sweet, so buckle in.

Way, way back in 1986, Suzuki unveiled the Nuda at that year's Tokyo Motor Show. Based roughly on the contemporary GSX-R750, it was equipped with the Gixxer's 750cc inline four mounted to, presumably, a standard gearbox. The bike's real party piece was its futuristic suspension and final drive. Out back it had a single-sided swingarm and shaft drive with a single perimeter brake rotor. This left the handsome six-spoke cast wheel open for all to see on the opposite side. The really cool thing was that the rear suspension setup was mirrored in the front, even down to the drive shaft. That's right, the Nuda was two-wheel drive, and utilized what was, for the time, an extremely futuristic front swingarm with hub-centered steering. Rad, huh?

The business side of the Nuda. Peep that forward swingarm and front drive shaft!

Sadly, that's about all I have on the Nuda. Apparently it was a runner—a rarity with concept bikes—and had a claimed top speed north of 170 miles per hour. One of my sources, an Australian site called Bikesales.com, states that the Nuda never went into production due to high manufacturing costs and some rumored reliability issues with the two-wheel drive system. That's a really mundane explanation for such a rad bike, so I choose to believe that the prototype was stolen by a guy in a leather jacket with a katana on his back, and was used to fight corporate thugs and Yakuza enforcers in the gritty Tokyo criminal underground.

FOR ME: Cycleweird: The AME Amazonas 1600

If any of you have any more information on the Nuda, please let me know. I tell you what, if it's still around somewhere, I'll do everything in my power to get my hands on it and do a ride/review. I'll even wear my mirrorshades.