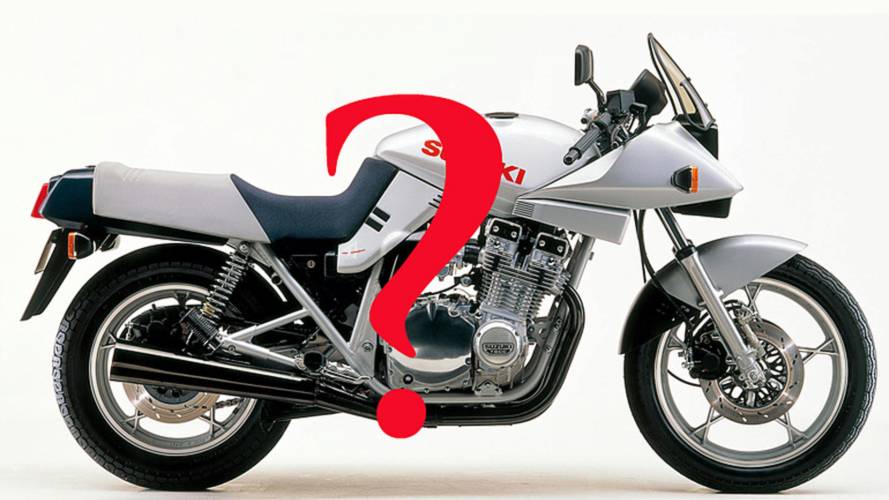 Word around the campfire is that Suzuki filed for a trademark on the Katana name and logo again. Could this be the rumored new turbocharged bike?

Muraki-san sighed, and drew his Katana

Man, remember the Suzuki Katana? First coined back in the early 80s by the German firm Target Design, the Katana name has graced the flanks of all kinds of bikes over the years—from the wild 1981 GSX1100 to sportbikes to sport tourers and even 50cc scooters. Sadly, the Katana name disappeared from American showrooms around '06 or '07 and we've had to look to the Hayabusa to provide evocative Japanese names ever since. That might all be changing though if some recent trademark filings are anything to go by.

According to motorcycle-magazine.com, on February 8, 2018, Suzuki filed a new trademark for the name Katana and its associated logo for, "Motorcycles and the parts and fittings thereof." Oh reeeeeeeeeaaaaaaaaaally? Indeed. The filing also lays out the particulars of the logo—the Japanese character for "sword" in black with a red katana thrust through it.

This all sounds very rad, but what could it all mean? Well, it may be nothing. This isn't the first time Suzuki has re-upped the Katana trademark (the last time was 2010) to protect it from being poached. I mean, it's not like Suzuki has a highly-anticipated, super cool, high-tech bike on the wa...oh...OH! Oh man, what if Suzuki is finally making a production version of their old turbocharged Recursion concept bike? Is that crazy?

It's not that crazy. I mean, word around the campfire is that something called the GSX700T is coming down the pipe this year. That "T" on the end there sure does suggest that it'll be turbocharged, and what better way to introduce a brand new, high-performance bike than to give it the name of an old favorite?

Now, this is all speculation. There's no solid word yet about why the trademark was filed or if the Katana will ever see the light of day again. If it does, we'll be there with our helmets and laptops, ready for a ride/review. So, you know, stay tuned.