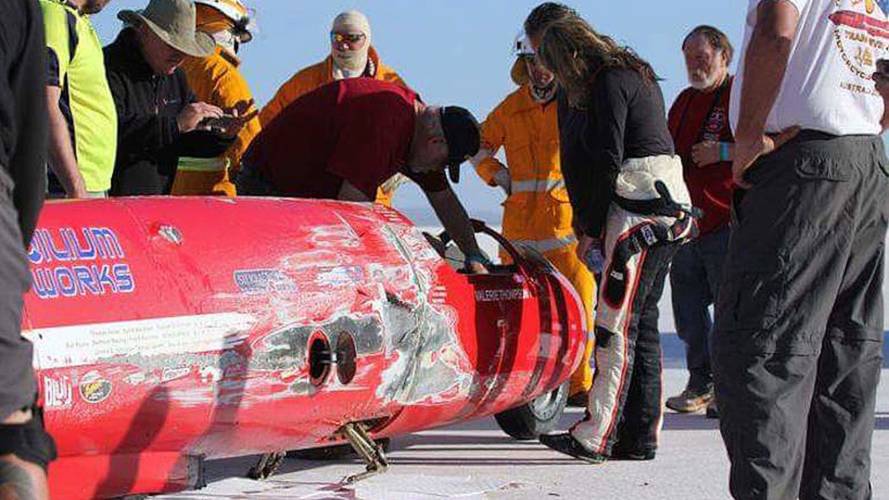 When chasing close to 400MPH things get crazy, and that’s exactly what happened when Valerie Thompson went down during a world-record speed run.

A lot can go awry when pushing a two-wheeler to half the speed of sound—something Valerie Thompson was reminded of on Monday March, 19, 2018, after her BUB 7 land speed racer crashed in Australia at over 340 miles per hour. Fortunately Thompson not only walked away from the wreck, but managed to set a record prior to going down. Unfortunately it wasn't the world-record speed she was gunning for.

“Good news and bad news,” Thompson told RideApart the day after the crash. “(I) Set a record of 328.467(MPH) in the DLRA Event but had a bad crash at the World Speed Trials event.” According to the report from the FIM, conditions were “ideal” the morning Thompson and Team 7 set out to chase a new world speed record at Lake Gairdner during day three of the World Speed Trials Australia.

Thompson and Team 7's BUB 7 after the crash.

Thompson’s BUB 7 streamliner was clocked passing the four mile marker at 299 miles per hour, but that’s when Murphy’s law reared its ugly head. The official report stated that chase vehicles observed the tail-end of the streamliner lift off the ground at which point Thompson deployed chutes which supposedly helped to stabilize the 3,000cc 500 horsepower rig, making the crash markedly less violent than it could have been otherwise.

“Bike is not in good shape but I'm doing okay. Walked away from the crash. The bike saved my life at 343 mph of impact,” Thompson told us the morning after the crash.

While it's just paint, the red streaks left in the salt are a reminder of how dangerous chasing 400mph truly is.

The streamliner eventually fell on its side and slid for over a mile, scattering wreckage and carving a red trench in the salt. When the machine finally came to a stop, Thompson was literally able to walk away, only having suffered minor injuries. While this obviously isn’t the result Thompson and Team 7 were hoping for, the team was relieved that the safety equipment did its job, and pretty damn well considering the ridiculous speed of the crash.

You can click here to read the FIM’s complete report, or go to Valerie Thompson Racing’s website here.

Photos courtesy of Jean Turner and the FIM