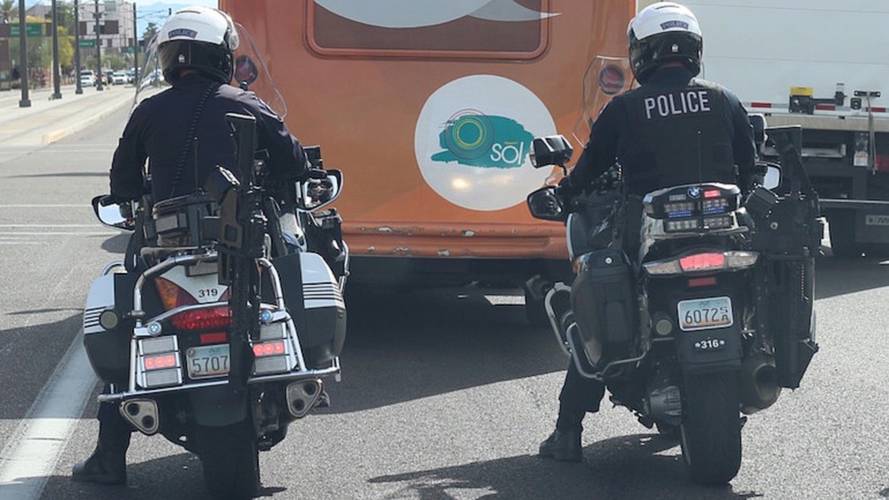 The Arizona police forces joins the ranks of departments adding AR-15s to patrol bikes and despite it making logical sense, it’s raising a few eyebrows.

Despite the hot-button issues associated with the high-powered rifles in today’s political climate, Tempe, Arizona police officials opt to mount AR-15s on half of the departments patrol bikes

Assault rifles have been a major topic of debate in the news as of late, but headlines from this morning have thrust the high-powered rifles into the spotlight yet again, albeit for what’s an objectively decent reason. Despite this, some members of the public seemingly feel a tad uneasy about seeing AR-15s out in the open on the back of police bikes instead of tucked away inside patrol cars. "People do notice. We've had both sides. We've had people concerned about how it looks. It looks militaristic," Sgt. Ronald Elcock of the Tempe Police Department told CNN affiliate KPHO.

Back in late 2017 RideApart got the chance to sit down with Roland Sands after he was hired to outfit a Honda Africa Twin for a Southern California police department, and the legendary builder explained that it’s vital to understand that motorcycle cops often are the first to arrive on scene as they have the ability to zip through traffic and squeeze in between gaps. For this reason it’s crucial that these officers have the means and ability to protect themselves and not be outgunned, just look at the famous February 1997 North Hollywood Bank of America shootout and it becomes abundantly clear that facing off against a long-gun with only handguns and shotguns makes for an incredibly dangerous situation.

The RSD Africa Twin includes an AR-15 rack, as well as ballistic blankets for officers to take cover behind

For these reasons the Phoenix suburb’s police department opted to equip eight of its patrol bikes—roughly half of its fleet of two-wheelers—with AR-15s mounted on racks on the back of the bikes. The Tempe PD got the idea from Chief Sylvia Moir after she transferred from El Cerrito, California to Tempe in late 2016, bringing the practice with her to Arizona. “When serious trouble strikes and traffic blocks the way, sometimes a police motorcycle is the only vehicle that can get through,” said Tempe police Commander Michael Pooley.

One of the Tempe PD's AR-equipped patrol bikes

In an interview with KPHO Sgt. Elcock explained that moto-mounted officers are required to go through an additional 40 hours of training before being issued one of the assault weapons, and the guns are safely fixed to the bike via a locking mechanism that only the officer can open. "So it's not something that anybody can go up there and grab off the back of the motorcycle," said Sgt. Elcock. There hasn’t been any word on whether or not any kind of trigger lock or guard is used.

"We're always concerned about public perceptions. We don't want people to think we're carrying these around for no reason,” stated Commander Pooley. The police departments implementing this practice are doing so fairly quietly for obvious reasons, not wanting this to become part of the debate over police militarization when it is in reality a pretty practical decision.