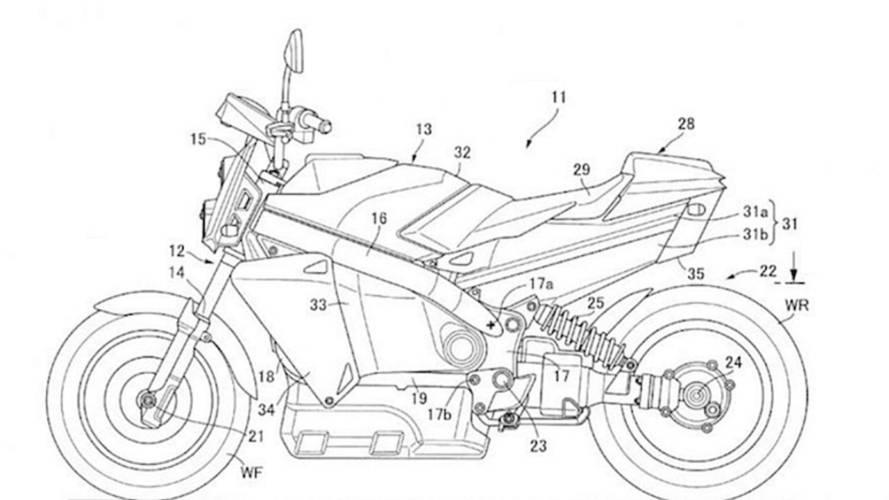 Leaked patent illustrations point to Honda having a naked, hydrogen-powered, shaft-driven mount in the pipeline

Recently, news broke that patent drawings from Honda leaked revealing a hydrogen fuel cell-powered bike may realistically see production in the near future. The patent drawings depict a shaft-driven modern naked sportbike with partial bodywork, an inverted fork, perimeter frame, and a snazzy stacked dual headlight setup. The most noteworthy aspect of the illustrations is, of course, the large hydrogen fuel cell cylinder beneath the seat. Though there’s no word if or when the concept will ever see production, the new renderings from Honda definitely hint at a hydrogen-powered bike becoming a reality.

Honda has supposedly been developing various hydrogen fuel cell-powered vehicles for well over a decade, and last year it was announced that Honda had partnered up with Toyota and Nissan to work on a fuel cell technology for cars and bikes. This news came out after Honda had already released what it calls a “fuel cell electric vehicle” (or FCEV). This was first released in the form of the “Clarity”, a mid-size luxury car in 2008.

Hydrogen-powered vehicles run clean, don’t emit any hydrocarbon emissions, and the only waste byproduct is water. Hydrogen powertrains also boast pretty decent mileage, with the current 3,528-pounds Clarity getting almost 75 miles-per-kilogram of hydrogen and a single tank range of several hundred miles. This is while putting down a claimed equivalent of 134 horse-power and 189 foot-pounds of torque, mind you.

Suzuki got approval for mass-production of its hydrogen fuel-cell-powered Burgman scooter back in 2011, but it wasn’t until more recently that the model actually became available to the public. Honda’s patent filings take things one step further and package this technology in an offering that is almost guaranteed to attract far more interest than Suzuki’s less sexy Burgman. Plus, as clean-energy powertrain technology is increasingly refined, drawbacks such as limited range, (recharging times for electrics), and availability of recharging stations will likely decline significantly over time.