Six OEMs Who Bucked the Market and Succeeded in 2017 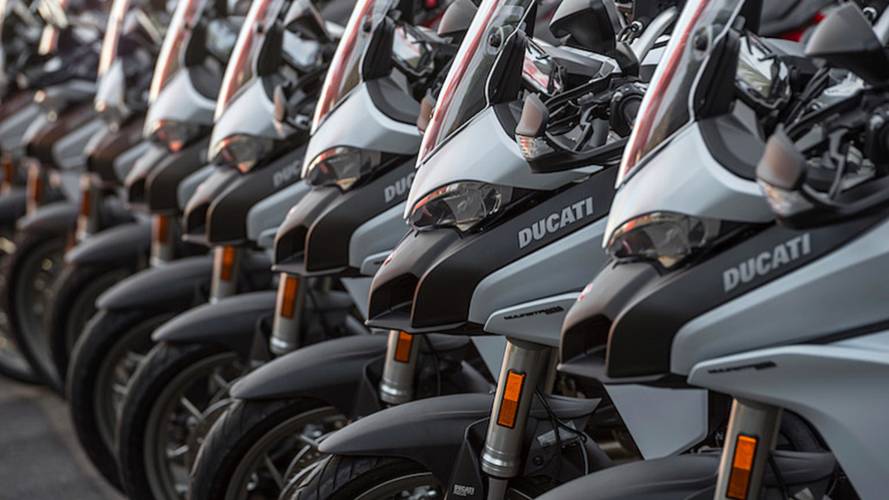 How companies from Germany, Sweden, India, England, Italy, and America have achieved positive growth and record sales throughout a tumultuous 2017 year

While many manufacturers continue to struggle, a select few have managed to succeed despite the down market

An aging customer base and a lessening interest among the next generation of riders has lead to a general climate of doom and gloom in the motorcycle manufacturing industry. Despite this, a select few companies have managed to break the trend and are reporting positive sales numbers for 2017.

MORE ON TRIUMPH’S RECORD-SETTING 2017: The numbers behind a VERY solid sales year

2017 was a record-setting year for the UK’s biggest motorcycle manufacturer. A range of new offerings combined with a stellar marketing campaign enabled Triumph Motorcycles to increase its global revenues last year by more than 127 million dollars thanks to an increase in sales of over 7,000 units—an 11 percent increase from 2016. 2017 marked the third straight year that Triumph saw record growth in nearly every major market, and 2018 is shaping up to be another banner year for the lads from Hinckley.

Five years ago, Husqvarna traded hands yet again, this time being acquired by KTM. The Austrian company has since done a fantastic job with its new acquisition, achieving an increase in sales growth of more than 20 percent compared to 2016 and selling almost 37,000 units worldwide in 2017. On top of what was already a pretty successful year, the brand just released its highly anticipated Svartpilen and Vitpilen models, all three of which are expected to sell like crazy. Like Triumph, it looks like another great year is in store for Husqvarna (and KTM) in 2018.

Though Ducati didn’t have quite as good a year as the other manufacturers on this list, the company still reported overall positive numbers in 2017. Last year Ducati collectively sold 55,871 units—a figure slightly up from 2016’s 55,451 total unit sales. In the U.S.—Ducati’s largest market—the company achieved a 1.3 percent spike in sales by moving just shy of 9,000 bikes. In addition, just over 5,800 units were sold in the Asian markets—a more than 30 percent increase from 2017. Ducati also experienced a 28.3 percent sales increase in the Spanish market, and sales were up by 12 percent in Ducati’s native Italy  with 8,806 units sold. With the introduction of a new flagship super bike and a strong selling Scrambler lineup, 2018 looks like it’s gonna be another solid year for Ducati.

At the start of 2017, Polaris Industries finally gave Victory Motorcycles the axe  in favor of Indian. Despite this, Polaris still reported positive sales numbers for last year—so long as you don’t include figures from Victory. If you only look at numbers from Polaris subsidies Indian Motorcycle and Slingshot, then the company saw an overall seven percent growth, with the final sales quarter of 2017 seeing a collective growth of more than 25 percent. Slingshot sales also spiked by a cool 17 percent while Indian continues to catch up with Harley for the market share of machines over 600ccs. With more and more states reclassifying the Slingshot as a “autocycle”, and an increase in Indian sales of more than 15 percent last year while Harley-Davidson’s sales dropped by around half that—you can safely expect good things from Polaris in the coming year.

2017 was a fabulous year for BMW. The company set an overall company record for global sales with almost 165,000 units sold worldwide. That's an increase of more than 13 percent in contrast to 2016. BMW’s full-size ADV machines continue to be top-sellers for the brand, while the company’s more recently released, entry-level models helps BMW to both attract new riders and customers in emerging markets. BMW stated that its new sales goal is 200,000 units a year by 2020, a target only possible if it continues its momentum in 2018.

NOT ALL US OEMS: Despite Victory getting the axe, Polaris reports positive numbers for 2017

Royal Enfield is on a roll, and the company's growth has been astounding over the past decade. The company went from producing just 50K units in 2010 to over 800K in 2017. That's a hell of a jump. For 2018, the Indian company plans something even more ambitious—selling 950,000 units by December. Can Royal Enfield do it, or is it just a pipe dream? Well, the introduction of new 650cc parallel twin-powered models, the new Thunderbird X 350 and 500, and the Himalayan model should go a long way in helping the company get there.

Granted, the overwhelming majority of these sales are all to overseas customers, and the same goes for the rest of the manufacturers listed. However, Royal Enfield is making big strides in 2018 by expanding their offerings stateside in the 250-750cc segment.

Though the number of motorcyclists appears to be on the decline, these positive growth and sales numbers suggests that there is still hope for a long future of new two-wheelers, (or does it?).