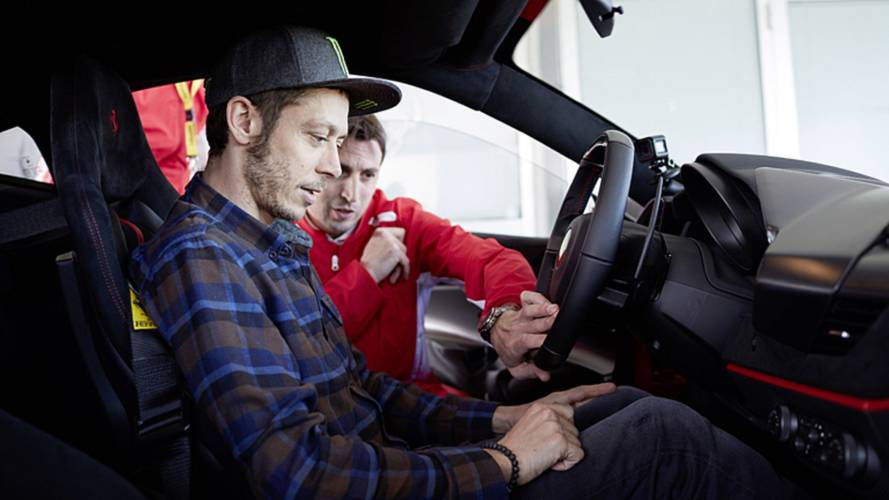 Rossi took some time out of his normal daily schedule of being awesome to flog Ferrari's new 488 Pista Special Edition around a test track in Fiorano.

Valentino Rossi stopped by Fiorano between races to take Ferrari's newest track weapon for a spin. You know, like you do

It must be fun as hell being Valentino Rossi. The dude has everything—looks, charm, a successful racing career, an extremely fine new girlfriend... everything a young(ish) man could desire. He can also, apparently, just waltz into Ferrari's Fiorano test facility and get some seat time in the company's hot new 488 Pista SE.

Valentino Rossi at the wheel of the Ferrari 488 Pista.

If you don't know, the 488 Pista is a lightened, track-tuned, up-engined 488 GTB that the company hopes will steal a little thunder (and some sales) from Porsche's monstrous 911 GT2 RS. Since this isn't a car magazine, we'll just give you the basics—711 horsepower twin-turbo V8, 2,822 pounds dry, 211 mile per hour top speed, and a zero-to-62 miles per hour time of 2.85 seconds. Now that is a spicy meatball my friends.

Now, we had to tell you that so we could tell you this. We got our hands on some pictures of Rossi with a heavily camouflaged 488 Pista test mule and, once again, we're jealous. Dude has the world in the palm of his hand and free access to Pistas before the rest of us? Is this justice?

Even in the camo the Pista looks fast.

Anyway, there's not a lot of info to go with these pictures. No word on why Rossi was there, how long he was in the car, or how he did flogging the Pista around the test track. That said, since we know that he has an affinity for speed and is good with just about anything with two or four wheels we can safely assume that he laid down some decent lap times.