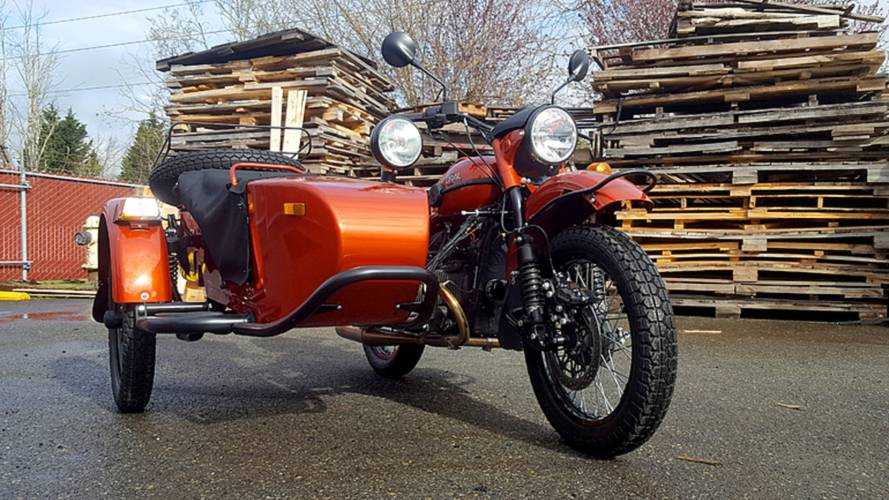 In his quest to not ride a single mile on his own bike this season, Jason set out for Seattle to do a quick ride and review of a new Ural Gear Up.

So, I've been pretty open around here about my old/weird bikes kink. Give me anything that's 40 years old that no one's ever heard of and has parts made from unobtanium and I'm a happy greaser. Something I may not have mentioned is that I'm a huge Russophile. Being a Slav myself (Bože čuvaj Hrvatsku, btw), I've always been drawn to the Slavic portions of Russia's culture and history. In addition, as a massive aerospace nerd and student of military history, Russia has a lot to offer. Hell, I named my daughters after famous WWII-era Soviet Air Force pilots. That's how consumed I am with this Russophilia.

GIVE ME: Twenty-Four Hours in Seattle With a Ural - Part 2

What does this have to do with motorcycles you ask? Well, you guys know Ural, right? The old-school sidecar rigs out of Russia based on 30s-era BMWs? Of course you do. If you guessed that Urals are the perfect blend of weirdness and Russianness and that I'd probably be just a tiny bit completely obsessed with interested in them, well, you'd be right. See, ever since I got this job I've been working on ways to get my hands on a Ural. For totally journalistic reasons, of course. Now, since I'm the Managing Editor of the finest motorcycle publication on the internets and therefore A Big Deal, I decided to give Ural HQ a call to see if they'd furnish me with a bike. Spoiler alert, they totally did.

Maybe a month and a half ago I cold-called Ural after a couple months of sending emails to a guy named Matt that I'd met back in December at IMS Manhattan. He worked for Ural, I pitched him some stories, and he gave me his card to contact him. He never emailed me back so I figured, "Man, this guy is bad at email" so I just rang the office. I didn't get Matt, but I did get Ural's extremely cool and gracious VP of Marketing Madina Merzhoeva. Turns out Matt left the company not long after I met him which, you know, explains why he wasn't returning my emails. Undaunted, I pitched Madina my stories and she was interested. Then she hit me with this out of the blue.

"We'd like to fly you out to ride one of our bikes here. How soon can you get here?"

Uh, excuse me? You—IMZ-Ural—want to fly me—some dude who just rang you up and claimed to be a moto journalist and editor—out to Seattle to ride one of your bikes? Despite wanting to just scream "OH, YES PLEASE!" I played it cool and told her that I'd love to but I'd need to check with my wife first. Seriously, my wife keeps the family schedule and I'd have to check with her first 'cause I can't keep a calendar to save my life. So, after a little email back and forth Madina and I nailed down a schedule. I'd fly into Seattle on Tuesday, ride all day Wednesday, then fly home Thursday—a short time to pack in a lot of riding and opinion forming, but I could do it.

Man, even AA's wings are great. Those are real metal!

I flew into SeaTac aboard a nearly new Alaska Airlines 737 on the evening of March 27. By the way, if you ever get the chance to fly Alaska do so, AA is the For Real Deal. Get the cheese plate, trust me. Anyway, I gathered my bags, got a car, then set out for the Georgetown neighborhood to meet my good friend and fellow baritone saxophonist Olivia. We had dinner and beers at a bar/chicken shack called Sisters and Brothers where I had some amazing fried chicken and collards. Seriously, S&B's chicken is so good it'd make a preacher kick out a stained glass window. After dinner we hung out, talked about music, swapped saxophone care tips, and bitched about our  bands until I had to head to the hotel. So I grabbed another car and made my way to Redmond.

Sisters and Brothers. Chicken so good I got religion.

After a thirty minute drive with a super nerdy Detroit-expat Lyft driver (all my drivers were great, by the way. Shout out to Seattle drivers), I checked into the Aloft hotel in Redmond which was, I'll be honest here, entirely too nice for me. That place was fancy, friends. I was exhausted after flying all day and drinking Olympia all night, so I set out my things, set my alarm, and sacked out.

The next morning I woke up two hours before my alarm because A - the time change issue and B - I was super excited. I was so ready to ride motorcycles after a long, gray, ugly Michigan winter I would have been happy on a Spree or a Cub let alone one of my favorite bikes. Madina swung by to pick me up around 08:30, and here's how I knew the day was going to be good. She came into the hotel and greeted me with a handshake and a big hug. We'd never met before, and we'd only corresponded a handful of times, and we were already on hugging terms. That kind of warmth and generosity was the norm for the day. Everyone at Ural was so cool and welcoming I felt like part of the family (also, and honorary Russian) as soon as I got in the car.

Ural's HQ is in a secluded business park in Redmond, Washington, surrounded by thick groves of pine trees. To get to the front door you need to cross a bridge over a nice little creek filled with ducks and frogs. Aside from the nature (and the moss. Oh god, moss everywhere), it's like any other commercial/light industrial block I've ever been in. Once inside the office though, it's wall-to-wall motorcycles. I got a quick tour of the facility wherein I met Ural's VP of Product Support Jason—the guy who would be teaching me how to ride a Ural—and an ancient dedushka in a mechanic's coverall named Sergei (or Sergey, I didn't get the spelling) who is Ural's factory mechanic. Then, finally, I was introduced to my ride for the day.

The visitor's lounge at Ural HQ.

Up until the morning I flew in, neither Madina nor I had a strong grasp on what I'd be doing on Wednesday apart from, "Jason gets a Ural". I had no route picked out, no real plan, and neither of us was sure what model I was going to ride. We were winging it, which honestly is how I do my best work. That morning though, after the tour, Madina took me to the back of the warehouse where a bunch of bikes were gleaming softly and said to me, "Here's the bike you'll be riding".

The bike was a gorgeous 2017 Gear Up in Terracotta Metallic—a color I still call Aztec Orange, a holdover from my Harley days. We stood admiring it for a while, talking about Ural's history and how passionate Ural owners are. She also told me that most owners name their bikes, and those names are typically Russian girl names. I told her that I'd already settled on Yuri or Lyudmila for the bike before I ever even saw it. I settled on Lyudmila, because why not, and pushed the bike out into the parking lot for a little pre-ride photo shoot.

Just about ready to go.

If you don't know, and far be it for me to assume what you do and don't know friends, the Ural Gear Up is the dedicated and rugged off-roader in Ural's lineup. All of Ural's bikes—except maybe the outgoing M70—are competent off-roaders, but the Gear Up is the one that's the best suited for off-road excursions. It's powered by Ural's 750cc air-cooled, fuel injected, two-cylinder boxer mated to a transmission with four forward gears and one reverse. Every bike has a modern electric start and a back-up kickstarter. You know, just in case. Power is transmitted to the rear wheel via shaft, and the Gear Up features selectable two-wheel drive that, with the flip of a lever, powers the sidecar wheel from the bike's rear drive. It has a stout leading-link suspension equipped with a steering damper up front and a standard swingarm/twin-shock setup aft. Brakes are Brembos on all three wheels, and the pilot is kept abreast of the bike's situation with a single speedo/instrument panel/clock assembly forward of the handlebars in the headlight cowl.

The Gear Up's trunk with pump and tool roll.

Now that you know all about the bike, let me tell you about the sidecar. Short answer—it's rad. Long answer—the sidecar features an all-steel tub on a sturdy frame with pretty respectable suspension. It has a locking, watertight trunk that I used the hell out of on my ride, a spare tire that fits all three wheels, a power point for charging electronics, a comfy seat, plenty of grab rails, and a powerful, forward-mounted floodlight. The trunk contains a tool roll (which I never looked inside of) and a tire pump, and the Gear Up comes with a sizable jerry can lashed to one side of the sidecar and an adorable entrenching tool/foldable shovel on the other. The whole setup looks extremely sturdy and capable just sitting still, and I was honestly impressed with the fit and finish after hearing Ural jokes for so many years (we'll talk about that later).

VASILY: How I Shredded My Gear but Saved my Hide

Out in the sunlight, that terracotta paint really popped and the black hardware made the bike look the business. I shot some pictures, then did a quick Facebook live video (which you should all go watch), then it was time to learn how to ride a Ural. Remember what I said about needing training? Well, until that moment I'd never ridden a bike with a sidecar. Hell, I'd never even ridden in a sidecar. No problem though, since I had my man Jason to show me how it was done. We got all geared up (see what I did there?) and headed off to a nearby parking lot where I was slated to learn the ins and outs of sidecar operation.

That's it for today, friends. Tune in tomorrow to hear all about the trip, how much I liked the Ural (spoiler alert, it was a lot), the killer restaurant I discovered, and how many times I thought I was gonna die because sidecars are weird.

PS: Here are some more pictures of the Ural for your edification!

Every bike should come with an entrenching tool.

The Gear Up's tidy cockpit. Note the parking brake on the left and the switch for the sidecar floodlight on the right.

The tonneau cover is a nice touch. Also, check out the steps and grab bars. So much room for activities!