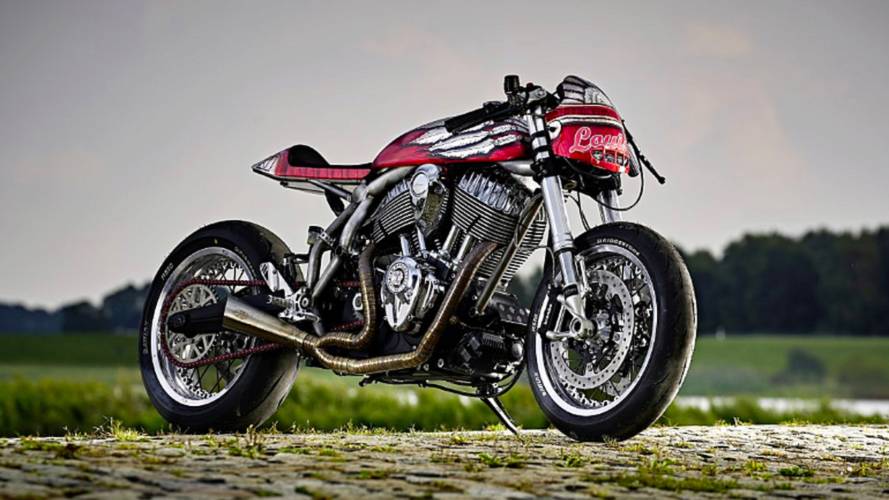 A new Indian Chief goes on a crash diet, receives a full cosmetic make-over, and a generous amount of top-shelf components

If you live in North America you’ve probably never heard of Detlev Louis Motorrad-vertriebsgesellschaft mbH. It's one of Europe's largest motorcycle clothing and accessories retailers—think Revzilla but European—and 2018 is the company’s 80th anniversary. So, to celebrate eight straight decades of vending, the folks at Louis decided to have Detlef Stüdemann and Martin Struckmann from the company’s "gear-haed crew", build one hell of an elaborate cafe racer around Indian Motorcycle’s Chief.

MORE BIKES OF THE WEEK: The Kawasaki H1-framed, H2-powered “Kamikaze”

Front and rear views of the "Engina"

By the time the build—dubbed “Engina”— was complete, all that remained of the donor was the big Thunder Stroke 111 V-Twin, though it too was pretty thoroughly modified by the time all was said and done. Everything else was jettisoned in favor of one-off components and high-end, bolt-on performance parts. This is less of a customized Chief and more of an entirely new motorcycle that happens to share a similar powertrain.

Starting with the full-dressed cruiser, the project began by stripping the massive machine down to the powertrain. From there, renowned engine specialist Ulf Penner was brought on board to massage the 1.8 liter V-Twin. He upgraded the stock mill’s camshafts and cylinder heads, improved airflow, and remapped the ECU. The engine now exhales via a new header from STParts that flows into a Shark silencer. As a result of Penner’s work, the powerplant now reportedly produces 70 percent more power with a current horsepower figure standing at 125.

The Engina's engine and exhaust

Wrapped around the revised engine is a new lightweight UNO chassis paired with a matching swing-arm and upgraded suspenders. An upside-down fork was tacked on in front—complete with Alpha Racing triple clamps—while a Wilbers monoshock was installed in back to dampen the build’s new swing-arm. The braking hardware has also been taken up a few notches, with the machine now sporting Brembo units. The Chief’s factory spoked rims were tossed aside in favor of new custom-made Kineo wheels wrapped in Bridgestone Battax rubber.

The Indian now has a much more performance-oriented stance

Next came the extensive cosmetic work the build received. The fabrication of the tank, tail, and headlight bezel were outsourced to noted customs specialist Michael Naumann. He churned out new, low profile units to top off the custom-framed engine. Danny Schramm of Schrammwerk was then called upon to adorn the bespoke bodywork in a hand-painted red and white livery complete with Indian-themed imagery such as feathers, a headdress, and various native American patterns.

Some close up details on the build

With the paint dry, it was time to add on the final accouterments—micro-LED indicators fore and aft, an LED headlight housed in the build’s custom bezel, metal reservoir canisters, a chain and sprocket conversion, Gilles stub handlebar, trick hand-controls, a T and T speedo, new grips, and custom machined rear-sets. Considering the force behind this build is a parts purveyor, it’s unsurprising to see this cafe racer build get decked out with so many trick components.

The build's before and after photos are pretty wild

While I personally have some issues getting past the paint job, but I do thoroughly admire this cafe build. Instead of just being an aesthetic rebuild, Stüdemann and Struckmann really went all out, optimizing the build’s engine, appearance, and performance, landing it in the spot for this week’s Bike of the Week. If you have a bike you think deserves to be RideApart’s next Bike of the Week, drop us a line at info@rideapart.com.