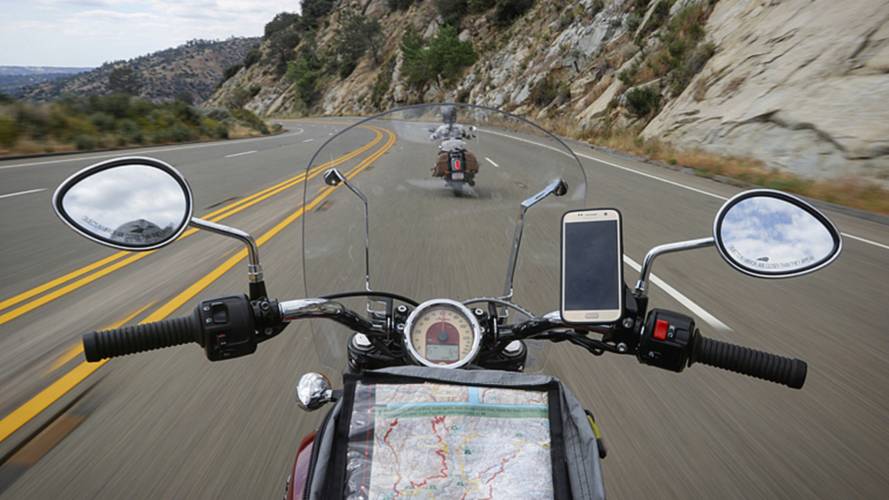 Kyra and Justin took a trek from the Pacific Northwest to Nevada to watch the Reno Air Races and rediscovered their love of bikes and travel.

Kyra and Justin rode from Oregon to Nevada to watch the biggest, best air race of the season

The idea of highly modified warbirds racing circles in the sky at something like 500 miles per hour is the sort of thing that really gets me going. I’ve always been fascinated with flight. My father taking me to air shows and exhibitions when I was a kid, and I even took a handful of flying lessons in my early twenties. Despite that love of flying I'd never been to the National Championship Air Races in Reno—or simply, the Reno Air Races. Held each September in the Southern Nevada skies just outside of The Biggest Little City in the World, this year’s races were on our list. Something to see as we made our way south from the Pacific Northwest back to Arizona where we intended to spend the winter.

Kyra and I have been on the road for a few years now, effectively living out of four bags. One pair is filled with all of our clothing and accouterments, another with camping kit, and the last with all of our camera and computer equipment. It’s a simple setup that has served us well and strapped to the tail racks on our 2016 Indian Scouts. It allows us to travel just about anywhere, within reason. So, early one September morning we rolled our Scouts out of the garage and headed off, our headlights and handlebars pointed south toward Portland, OR, then east into Idaho, and finally south again across the state of Nevada toward Reno.

We rode some choice mountain roads.

Riding from Oregon into Idaho is something every motorcyclist should enjoy at least once in their lives. Following the Columbia River along its southern shore through Hood River and then cutting southeast passed Pendleton and eventually into Idaho. Our first stop was Boise, where we kicked back a few beers and surveyed our plan for the next couple of nights. We would end up staying in Idaho longer than anticipated, and it was rather bittersweet when we did decide to depart.

Soon after, we traded tree lined mountain roads for a dry and arid desert landscape as we worked our way from Twin Falls, Idaho to Well, Nevada, then west on Highway 80 to Winnemucca. Riding across the barren desert might not be beautiful (says you -JM), but it certainly offers you a bit of time to reflect. Windswept sagebrush and ten thousand cacti disappear in your mirrors. The highway appears translucent at times, fading from a mirror like mirage to well-traveled tarmac as your wheels pass over it. The towns that dot this stretch of road across Nevada are sad and small. Remnants of endeavors and economies long since passed left to dry up in the desert. Then, suddenly, you find yourself on the outskirts of a National Forest, with Pyramid Lake to the north and ever beautiful Lake Tahoe lying just south of the city of Reno where we finally arrived some ten days after we departed.

Not really our cup of tea.

To be perfectly honest, Reno is not my kind of town. A downtrodden Vegas where real, die hard gamblers go to give away their money. To smoke and shuffle through smelly casinos and eat buffet food until they can’t walk back to their rooms. Apparently it’s up-and-coming. Someone mentioned that See See Motor Coffee Co. had opened a location, and that the motorcycle scene was burgeoning. I didn’t catch much of that, but maybe I wasn’t looking hard enough. Possibly because my sights were set toward the sky, where P-51 Mustangs and the like would soon be circling, at speed.

I can't even imagine how many hours this guy has.

The race course is about twenty minutes outside of town at the Reno Stead Airport. There are eight pylons that designate the oval "track", and pilots must keep their planes between 50 and 250 feet off the ground to be considered on course. There are multiple classes of racing aircraft, from jet powered to WWI-era biplanes and everything in-between. The Texas Flying Legends Museum brings out a fleet of fully restored and operational WWI and WWII aircraft for an exhibition overheard, and the grounds are littered with new and old airplanes for race goers to gawk at. If you’re interested in aviation, or just things that go fast, this race is a must. However, due to a tragic crash in 2011, the race course is now set back a considerable distance from the grandstands. That didn’t stop the racing from being exciting, nor the fans from going full out. I had no idea so many people were interested in air racing, let alone paid attention to it year after year. I suppose there’s a fan for every flavor.

Warbirds at the ready.

We left Reno on Monday morning, our bags loaded with the same stuff they had been for the last few years. When you travel by bike, you can’t really take keepsakes with you. Instead, what you bring home are memories and perhaps a handful of photographs. In this case, we walked away from the Reno Air Races with a newfound appreciation for the airplanes, their pilots, and the fans that make the trek to Nevada each year to watch them run. While the ride to Reno wasn’t one I’d necessarily recommend, sometimes those long slogs across a desolate desert help you remember why you fell in love with motorcycles and travel in the first place. It’s the memories that matter, the ones that I’ll get to pass along to my kids, maybe even motivate them to bring their bikes to the Silver State to see ancient aircraft race across the sky.