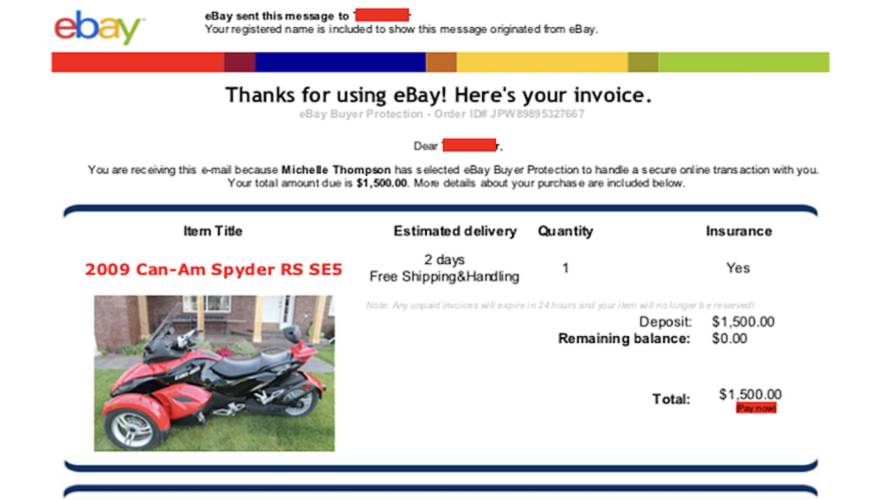 Once in a lifetime bike deals are seldom what they appear, especially on the internet. Let's unpack today’s most prolific online motorcycle sale scams.

An Inside Look at Online Motorcycle Sale Scams

We look at today’s most common type of online motorcycle sales scam, point out the red-flags, and teach you how to avoid becoming a mark

For the last year or so I’ve been writing for Bike-urious.com, a job that entails routinely scouring the interwebs for interesting, rare, or otherwise noteworthy motorcycles that are currently for sale. During that time, I've run into a lot of scams. Craigslist, RaceBikeMart, CafeRacersForSale, none of these are exempt from motorcycle sales scams — something I’ve become increasingly aware of. Buying a used motorcycle is often a great way to go, I’ve done it myself many times and I’ve had generally positive experiences. Unfortunately, scam artists post dozens of ads every day for fictitious bikes in hopes of making a quick buck.

There are countless methods and sneaky different tactics utilized by these individuals. Thankfully there are also a handful of telltale signs and red-flags that should tip one off to the legitimacy, or lack thereof, of a used motorcycle post or classified ad. While researching this article I played along with some scammers, pretending to be interested in their scam to get a better sense of how some of the most common ruses work.

Let’s go over one scam that has all of the hallmarks associated with online motorcycle scams. One day I was perusing bikes on Craigslist when I came across an original 1924 Harley-Davidson Model F in great shape for only $7,800. Not a replica mind you, the real deal. As you may have guessed, a Model F example is worth considerably more than the ad’s asking price. The thing was a steal, so I contacted the seller and inquired about the bike. This was the first response I got…

A screen-cap of my email from "Betty".

I replied with fake info and almost instantly received two emails. The first informed me the seller, “Betty Farren”, had “initiated the transaction” and that eBay would be sending me payment instructions. The second email was the aforementioned instructions.

The payment instructions looked pretty legitimate. A message from “eBay” explained that the buyer was required to send the money to eBay via Green Dot Prepaid Visa or MasterCard. Once ‘eBay” had the money, it would then notify the seller, at which point the seller would send the item. Upon receiving the item, the buyer was supposed to inform eBay, and the funds are then transferred to the seller. Fool proof, right? The email even said that, “eBay are eligible for a coverage up to $50,000.00”. There was also a toll-free number to call for assistance, so obviously I did. The guy on the other end explained the payment process to me again in broken english.

This same scene played itself out numerous times, and I always finished it up the same way. After learning as much as I could, I would confront the scammer, tell them I was well aware of the scam, explain that I’m researching a story, and offer to pay them a small amount of money via Green Dot Cards in exchange for granting me a short interview. Unsurprisingly I never got any takers.

This process repeated itself over and over throughout the handful of months I spent researching this story, and each time I noticed similar themes and tactics used. So let’s look at “Betty” and the ad for her Model F as an example, and pick apart the red-flags that are typical of these kind of scams.

First off, if something seems too good to be true it probably is. There is a one-in-a-million chance that you’ve lucked out and found a bargain, but that vast majority of the time you’ll find yourself being scammed. While a clean, all-original 1924 Harley may seem hilariously suspicious, scam artists appear to be doing this intentionally. By making the ad as ridiculous and far-fetched as possible (not unlike the classic “Nigerian Prince” scams), only the most gullible people will reply. While most people will call BS right off the bat, scammers are aware this kind of hustle is a numbers game and they plant as many seeds as possible because even a .01-percent success rate will still yield them thousands of dollars.

The next major red flag is the sob story. I was genuinely surprised that almost every scam post I came across included a semi-elaborate sob story explaining why the bike was being sold for such a low price. Scammers often pose as military in an effort to sound more legitimate or trustworthy too. Sob stories are a blatant indication that something is awry. The fact shipping is included in the price before they have your address is another red-flag.

Out of Town Sellers:

Location is also another red flag. While some people selling bikes who live in small towns will occasionally post adds in major cities, a frequent theme I came across was the bike was always somewhere out of state. Most of the time I was told it was at a shipping or distribution center. Remember, the seller doesn’t know where you live, so you can always ask where the bike is, pretend you live near there, and ask to come see it. If all is on the up and up, a seller shouldn’t have any problem arranging a time for you to view the bike.

Every scam I’ve ever seen has said that the bike is absolutely perfect—mechanically, cosmetically, in terms of registration, etc. While obviously this alone doesn’t mean an ad is a scam, it is one more thing to be aware of.

The Devil's in the Details:

Sometimes the scam emails give you clues, or methods to help determine if a bike is a scam. Our friend “Betty” says “All service records in hand, all upgrades and routine service performed by dealership”. This allowed me to ask what upgrades had been made so I could compare the answer to the photos. You can also ask what dealership the service was done at, something the seller should be able to answer if they have all the service records.

Though the fake eBay payment email was admittedly well photoshopped, it contained a few giveaways. eBay accepts credit cards and PayPal, but never asks customers to load up Green Dot Cards (or pay via Western Union, MoneyGram, etc). I’ll also point out that even though the digital letterhead said the email was from “eBay Buyer Protection”, the email address it came from was a Gmail account. As a company valued at tens of billions of dollars, you can assume they use their own email addresses.

If something sounds fishy, google it. Trust your gut, if something seems off, it probably is. You have access to the resources of the internet. Use them! The scammers almost always steal photos from other ads, so run a google reverse image search to determine if the seller is the original poster, or if the photos have been swiped and you’re being bike-catfished. The website ScamDigger.com displays pictures routinely used by scammers and ScamShield.com archives the email addresses of known scammers.

In total I spoke with a dozen or so scammers, and each time the phone number listed has been linked to either a burner phone or a google voice account. This is another major red-flag. This includes the numbers listed for the “seller”, as well as “eBay”. Though they do set up different numbers for the different roles they play (i.e. the seller, the eBay rep, etc), most scammers are lazy and will use the same phone number for multiple scam ads. You can search a phone number on websites like AllOfCraigslist, and if someone appears to be selling 10 different motorcycles, all in different cities and states and all at ridiculously low-prices, you can safely assume its a scam.

Don't Let the Good Ones Trick You:

While the majority of online motorcycle sale scams are pretty obvious to most people, the sheer number of scammers out there means some of them are going to be more adept than others. While it was once commonplace to see too good to be true ads written in broken English, more and more scammers today are directly copying and pasting adds from legitimate sellers. I was a bit taken back to see scam ads that were well written, including information like “garage-kept only, Chevron 91 only, 400 miles since valve adjustment”, as well as detailed lists of modifications. Don’t let a well written ad fool you.

I understand that to someone who doesn’t ride, motorcycles can look really similar. I was way amused to discover a handful of scam ads where the “seller” had mislabeled the machine they’re pretending to sell. Stuff like listing a GSX R1000 and then showing a GSX R750 in the photos. This probably goes without saying, but this is yet another red-flag.

I didn’t personally come across this while researching this story, but I did read about others who were scammed while trying to buy a motorcycle, and several victims reported that they spoke on the phone with people that spoke perfect english without any hint of an accent. Back in the Summer of 2013, Milwaukee resident Mark Zielinski started shopping around for a Harley, exciting about the prospect of riding in H-D’s 110th anniversary parade. That’s when he came across a 2008 police issue bike for $4,800.

“It's a steal. It was a 105th edition, painted black. And the guy was advertising that he did some work to it, had extra chrome put on it.  I mean, that's like a candy—a kid in a candy store," Zielinski told Fox 6.

The seller claimed to work for a cruise line, that he was unable to ride the bike because of his job, and that the the bike was in Italy and wasn’t registered. After going back and forth emailing each other, the seller explained he was going through a divorce and needed to sell the bike ASAP. Like many of the scams I came across, the seller told Zielinski that after the bike arrived he would have two days to inspect it for any damage or issues prior to the payment going through.

What started as a cash on delivery deal then changed after Zielinski had bit the hook. His heart was set on the bike and his desire and excitement blinded him from what next should have been a blatant red-flag; the seller then asked for a down payment of $2,500—more than half of the bike’s price. Having received a collection of official looking documents, including from a shipping company called Britannia Movers International (a real shipping business that scammers have been posing as) Zielinski was confident all was well, but on the scheduled day of delivery, there was no bike.

"Now I'm here to let everybody know, that if you're trying to buy a Harley, don't do it online," said Zielinski.

I would argue that there’s nothing wrong with buying a motorcycle online, one just has to be smart about it. Don’t give a stranger money for something you’ve never seen. It’s more or less as simple as that. Use your head, trust your gut, and don't give your hard-earned money to some dickhead on the other end of an internet connection.

Are there any other red-flags or giveaways that I didn’t mention?