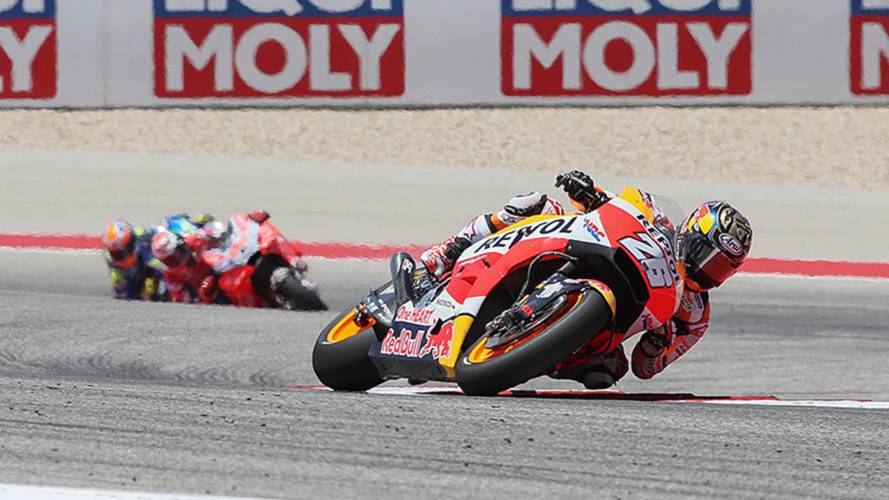 Injured Dani Pedrosa said he was "totally finished" after MotoGP's Austin round, but was happy to take seventh, after heavy doses of painkillers.

An injured Dani Pedrosa said he was "totally finished" after MotoGP's Austin round, but was happy to take seventh, which seemed "unthinkable" before the race

Pedrosa sustained a fractured right radius after a highside crash on the opening lap in the previous round in Argentina, and underwent surgery 10 days before the start of the Austin weekend.

While he was cleared to ride at the Circuit of the Americas, Pedrosa was unsure he could even do the whole race at the end of Saturday.

BEFORE: Injured Pedrosa to Attempt Racing in Austin

Pedrosa's highside crash at the last round in Argentina required surgery. Two weeks later he still raced and finished seventh at Austin.

However, he went on to salvage seventh, which was "unthinkable" for Pedrosa prior to the race.

"I had a hard time but I'm happy because we got a good result given the circumstances," said Pedrosa. "It was unthinkable to finish seventh, I took more points than I expected.

"I am very pleased to have tried it. Now I’m completely finished. I also had no strength in my other arm, which held all the weight. I'm very tired, it was not too enjoyable."

Pedrosa said he felt "very bad" in Sunday morning's warm-up, which he ended in 19th, but he managed to complete the race thanks to a "stronger treatment" of painkillers.

"We did a little stronger treatment with the painkillers, but in the end I had no strength," he said.

"This morning I felt very bad in the warm-up, I felt sore and not so much energy but just before the race I could recover and they help me with the pain for the race.

"Of course I didn’t have more power by having less pain, I couldn’t do things faster, but I could be more focused.

"I tried to stick with the train and keep the pace as long as I could. I struggled at the end to control my bike, I was still with some gaps behind and I could manage.

"I was behind Dovizioso, Zarco, difficult to approach and attack because I was more cruising than managing the bike like I have control.

"But the effort was worth it and we have some points, and this is very important."

The next round at Jerez is two weeks away and Pedrosa is not expected to be fully healed by then, but he hopes to feel "two times better than here".

"It will be three weeks , normally six weeks to feel well," he said.

"I hope at least two times better than here, and honestly the track should be less demanding."