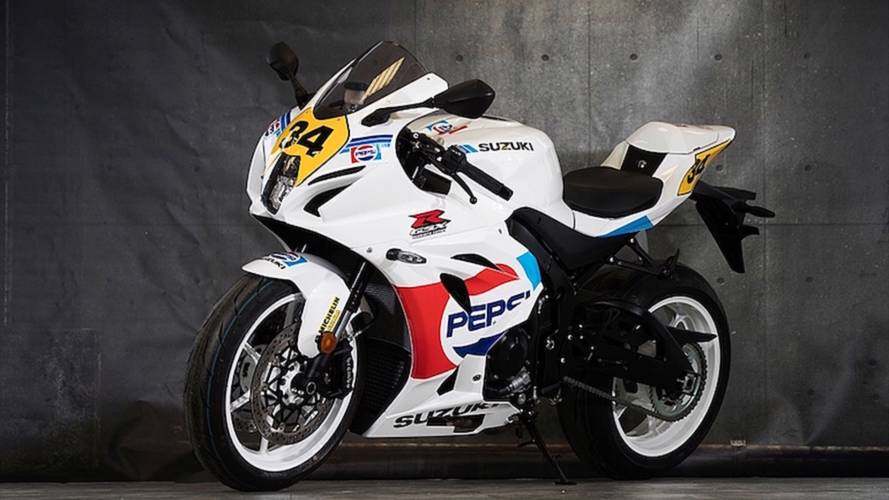 Legendary bike racer Kevin Schwantz was born to the saddle. The Texas native started racing from an early age and worked his way through the ranks until he earned himself a place on the world stage. In his professional Grand Prix career, Schwantz achieved a premier class world championship title in 1993, more than 50 podiums, and over two dozen fastest lap times, poles, and wins. Though the number 34 rider officially retired from the competition in the mid-‘90s, he’s still a much beloved racer and has continued to serve as a brand ambassador for Suzuki.

Just recently, a Suzuki dealership in southwest England announced a limited edition version of the latest Suzuki GSX-R1000 adorned in a replica Pepsi livery of Schwantz’ 88’-’89 season. The replica paint digs are actually pretty impressive and remain very true to the original fairing’s graphics, complete with the yellow number 34 on the tail and nose, the Suzuki striped tank logo, and the exact same sponsorship decals on the belly pan.

Just to make it even more exclusive, the top of the replica's tank has Schwantz’s signature scribed on it. In total only 25 units will be produced, and they’re expected to go quick (both figuratively and literally). To further sweeten the deal, Blade Suzuki—the Swindon, UK dealership offering the replica Schwantz bikes—will toss in a free full carbon fiber Yoshimura exhaust—reportedly worth more than $900 (£659)—so long as one’s order is placed prior to April 30, 2018.

MORE ON THE LATEST GSX-R1K: Riding the new GSX-R1000 with Kevin Schwantz

The limited edition superbikes will carry an MSRP of $19,580 (around £13,999.00), which is admittedly a tad more expensive than the GSX-R1K’s sub $15K price. I really dig how this allows riders and race enthusiast to own a unique piece of motorcycle history while still getting the latest and greatest in performance and style.

For more info you can click here to check out the website for the Limited Edition Kevin Schwantz Pepsi Suzuki GSX-R1000.