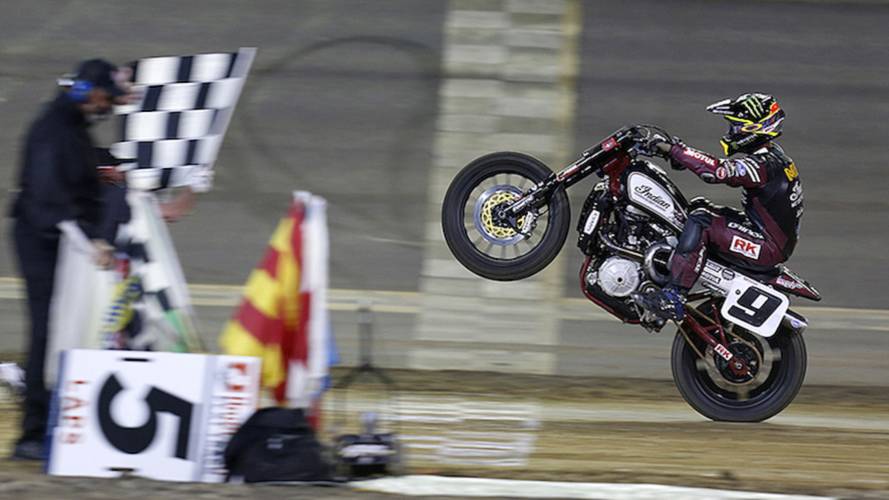 An FTR-riding privateer joins the league’s reigning champion on the podium at the second round of the 2018 American Flat Track season.

America’s oldest moto marque saw factory rider Jared Mees finish the second round at the Atlanta Short Track on the top of the podium, repeating his results from the season’s opening round in Daytona. Joining Mees was Kenny Coolbeth Jr. who took second place on Sunday aboard a privateer Scout FTR750, while four of the other top ten spots were also claimed by riders aboard FTRs.

“Jared and Kenny are not only two of the most accomplished riders in the sport, but two of the smartest and most technical riders,” said Gary Gray, Vice President – Racing, Technology & Service for Indian Motorcycle. “With their Scout FTR750s dialed in, they each got better as the racing continued. Jared extended his lead and Kenny skillfully completed impressive passes to reach second place in the Main Event.”

The riders both managed to win their respective semi-final event, going on to the main event in which Coolbeth slipped past multiple riders to secure a second place finish while Mees got out front early on and comfortably maintained his lead until the checkered flag. The 41-year-old’s second place finish marks the first time he’s been on the podium in more than a year, landing him tied with fellow FTR pilot Henry Wiles for second place in the season’s overall standings. Coolbeth’s 2018 season aboard the FTR750 has gotten off to a fantastic start — a fact that the privateer must enjoy that much more after announcing his retirement at the current season’s end.

“The rain delay made for a long weekend, but we stayed focused and were able to have the Indian Scout FTR750 dialed in on Sunday,” said Mees who currently leads the series with 50 points. “We couldn’t be happier to be walking out of Atlanta with consecutive wins, just as we did last year. It’s a good spot to be in, but there’s a lot of talent on the track gunning for us, so we can’t let up at any point.”

The action will continue at the next round at the Texas Half-Mile on April 28. If the first two rounds are any indication, 2018 is looking to be yet another stellar year of flat track racing for Indian Motorcycle. To check out the rest of the American Flat Track schedule for 2018, you can click here. A few days ago Indian also uploaded a short promo video that's worth a quick watch if you're like me, and a fan of watching motorcycles turn left.