UPDATE: Indian Reveals 3 Finalists for The Wrench Build Off 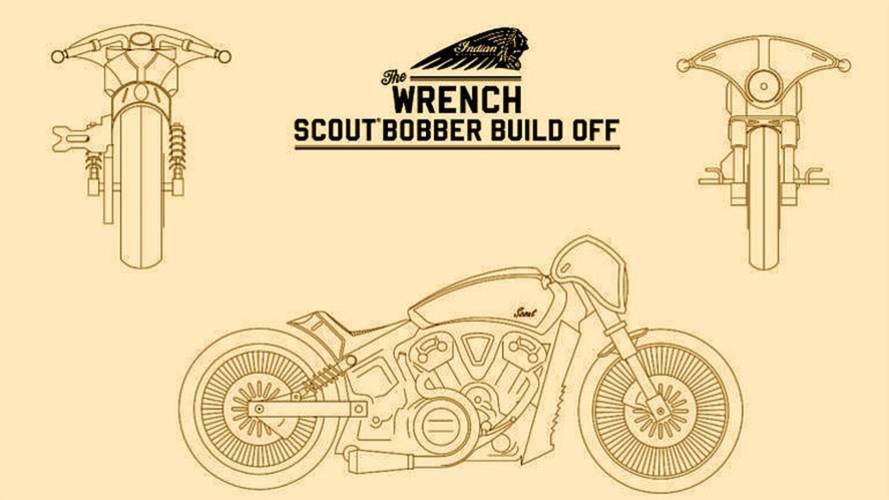 After significantly narrowing down the applicants, Indian Motorcycle announces the three finalists who will bring their designs to life for the Wrench Build Off

UPDATE: Back in early March of 2018, Indian Motorcycle announced “The Wrench: Scout Bobber Build Off”, a collaborative effort with Hot Bike Magazine in which non-professional/amateur enthusiasts were invited to submit renderings of one-off Scout Bobber builds. Once the builds were submitted, the public could vote on to narrow down the applicants to just a trio of designs. From there the creators of said trio will be given a $10,000 budget and the opportunity to bring their rendering to fruition. All three bespoke Scout Bobbers will debut in July of 2018 at Sturgis, where a winner will be selected whose work will be featured in Hot Bike Magazine.

Fast forward to April 24, when Indian unveiled its three finalists—a sleek, modern bobber with sharp lines and a girder-style front-end, a two-up chopper with a classic visual theme sporting a rear car-tire and sissy-bar, and a retro-style cafe racer wearing a full fairing adorned in a black livery with gold highlights. While I assume most have already picked a favorite of the three, it won't be until the bikes are done being physically built that we’ll really get a sense of what these custom Scouts are all about. We’ll be sure to check back in later this summer when the trio of Indians make their public debut. Personally, I’m pulling for the black and gold "cafaired" design, but what say you?

A few weeks back we told you about Indian Motorcycle’s ‘Wrench Build Off’ competition where a trio of (nonprofessional) hobby builders will be selected to customize a 2018 Scout Bobber using a $10K budget. For two weeks, Indian accepted submissions of custom renderings which the public can vote on to decide which three submissions will earn the chance to turn their drawing into a tangible machine. Now that the submission deadline has ended the company has put together the initial finalists. Below is a selection of our favorites so far.

1. This Hoosier-tired chopper build was done by Christian Newman of Lakeview, New York. In his professional life Newman engineers mining equipment, giving the hobby builder access to a massive variety of specialty tools. Newman's approach is relatively simple and straight forward, relying on old-school visual DNA, though actually bringing the bespoke bike to fruition will be no walk in the park.

2. This next finalist is probably my personal favorite. Coming to us from PJ Grakauskas of Avon, Ohio, a family man who retreats to his backyard shed to escape the stresses of everyday life. With kids to raise, Grakauskas has never really been able to finance an involved build, which is part of what makes this competition so cool. For his submission, Grakauskas has created a full-faired cafe-style machine adorned in a black and gold livery. According to Indian, PJ wants to churn out almost every bespoke part of the project by hand too. Pretty impressive stuff.

3. In the number three spot we have a old-school drag racer concept from Ross Latimer of Warrenton, Virginia. Latimer spends his days as a union pipe fitter before going home and pursuing projects using smaller and more precise pieces of metal. Latimer’s drawing depicts a full drag-style bike inspired by the spirit of pro-stock drag racers. I personally think this project would be exponentially cooler if the Scout got some kind of forced induction, but it’s still a pretty nifty build either way.

4. For our final favorite we have a rendering from Texas-based Alfredo Juarez, a Mechanical Engineer for NASA with a lifelong knack for tinkering with engines and welding. As someone who has a hand in some of the most complex vehicle projects on the planet—all of which are sorta customs if you think about it—there’s no questions as to whether or not the Texan has the chops to tackle a custom motorcycle project. Juarez’ submission is pretty sharp, sporting a girder-style fork, a hardtail rear end, and a flowing tank sandwiched between a custom headlight cowl and a sleek bobber-esque sliver of a saddle.

You can check out the rest of the submissions on the Wrench Build Off page on Indian’s website by clicking here.