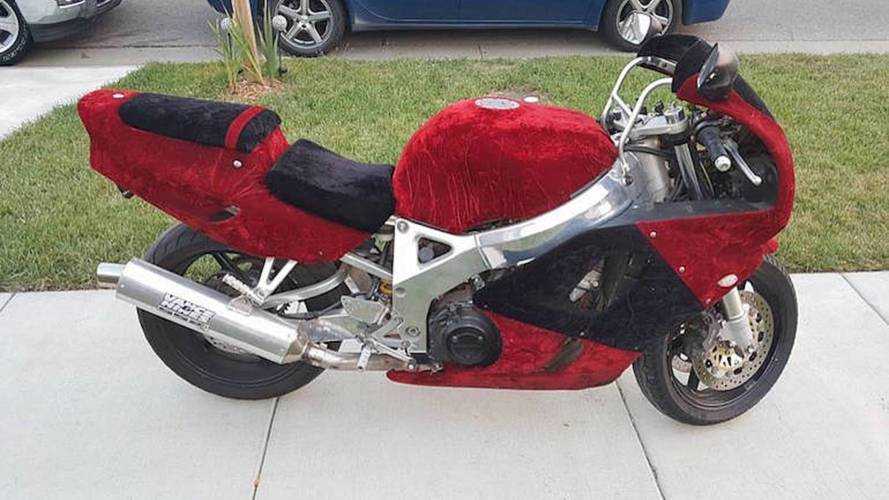 One rider in Kansas is parting with his, let’s say, “unique” crushed velvet wrapped 1995 Honda CBR 900RR, because it’s 2018 and nothing makes any sense

Looking to combine your love for crushed velvet with your passion for motorcycles? Look no further...

According to Statista; Honda Motorcycles sold 19.5 million motorcycles in 2018. With so many bikes on the road, it’s unsurprising to occasionally see some seriously weird modifications and customs. One would be hard pressed to find a better example of a total weirdo two-wheeler than this 1995 Honda CBR 900RR that is currently for sale on Craigslist in Topeka, Kansas. While taste is subjective, I imagine most people will agree with me on this velvet-wrapped double R being next-level weird.

We love the way the seller acknowledges the odd choice in bodywork wrap, as if to say “Yeah, I know, don’t ask”. I’m also pretty amused by the obvious gasoline stains adorning the tank’s velvet. The seats are another nice touch, you have to admire the owner’s commitment to going all out with the aesthetic. Another aspect I can’t help but wonder about is how whoever wrapped this bike, opted to go for a two-tone scheme. It’s also a bit strange that there’s no mention of the aftermarket foot-pegs, LED indicators, or the four-into-one Vance and Hines SS2R pipe.

Between having 54,000 miles on the odo, a salvage title, and bald tires, it’s probably safe to assume this bike has been pretty thoroughly neglected. However some components are surprisingly clean so it’s hard to figure out what the hell is going on here. Part of us wants to think that maybe this bike is stolen, and instead of painting it, the thief is using the “hiding in plain sight” approach, utilizing such an outrageous disguise that its ridiculousness will allow it to go unnoticed. Who knows?

You can click here to check out the ad for yourself.