The Jackson 5's Custom Honda Three Wheeler up for Auction 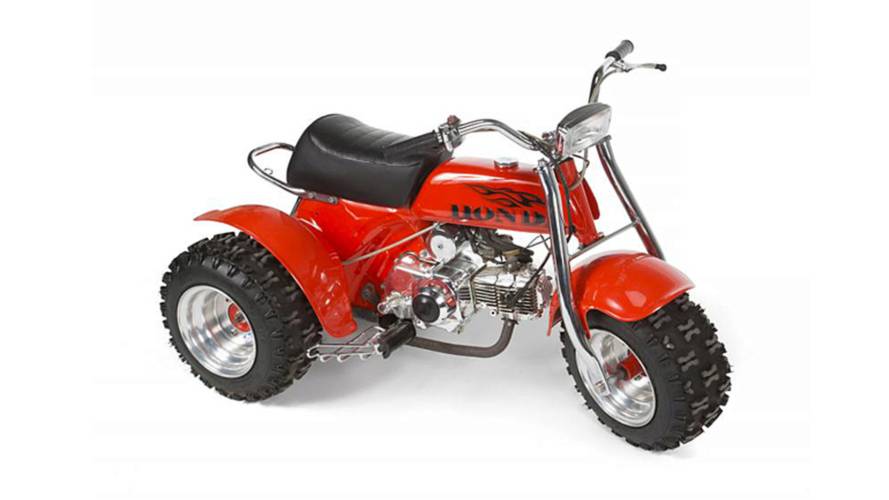 Julien's Auctions is selling a cool and quirky little piece of music history—a custom '73 Honda ATC70 made specially for the Jackson 5.

Way, way back in 1970, Honda began production of the ATC line of off-road trikes. That first model, the legendary, fat-tired ATC90, sold like gangbusters and gave birth to today's billion dollar ATV industry. Why are we talking about this today? Well, it seems that a very special ATC is coming up for auction soon—one built by Honda specifically for the Jackson 5.

This particular trike—a 1973 ATC70—was built for the famous family by American Honda and delivered to Motowon Records/The Jackson 5 on April 3, 1973. The delivery receipt, which is included in the auction, declares that the unit is ATC70 SN 1002534 and was designated "Promotional" material. It's all original (apparently), and features a custom paint job and copious amounts of chrome applied by Honda before being delivered. It comes with an old school blue and yellow California plate that reads "Jackson 5" and a registration tag that expired in August of 1973 (we should note that Michael Jackson's birthday was in August, so maybe this was his personal trike? We're not sure).

The price is worth it for that vanity plate alone.

ARE YOU OKAY?: Mini Bike from Dumb and Dumber Sells for $50K

Aside from the cosmetic work, this trike seems pretty stock. It still has the 70cc, overhead-cam four-stroke single it was born with and the stock suspension—i.e. none. The auction is being handled by Julien's, and bidding officially starts on May 19, 2018. Despite that, there are already two bids on the trike and Julien's estimates that it'll eventually go for $10,000 to $12,000. That's, uh, that's pretty steep for a small, 45-year old Honda trike, to be honest. It is a piece of music history however, and probably worth the just for a conversation piece. If you're interested, you can find the Julien's listing here.

Apparently the Jacksons were as into riding as they were into music. We had no idea until we did some research for this here story and discovered a ton of pictures of Michael, Jermaine, Jackie, Tito, et.al. posing with minibikes and tooling around on trikes. Since these photos are amazing, we decided to include a few here for your edification. Enjoy!

A promotional still from the Jackson 5 variety show. We love how the jumpsuits match the Beemer.

Just chilling around the pool with our minibikes. You know, like you do.

The King of Pop Himself tooling around on an 80s-era ATC.