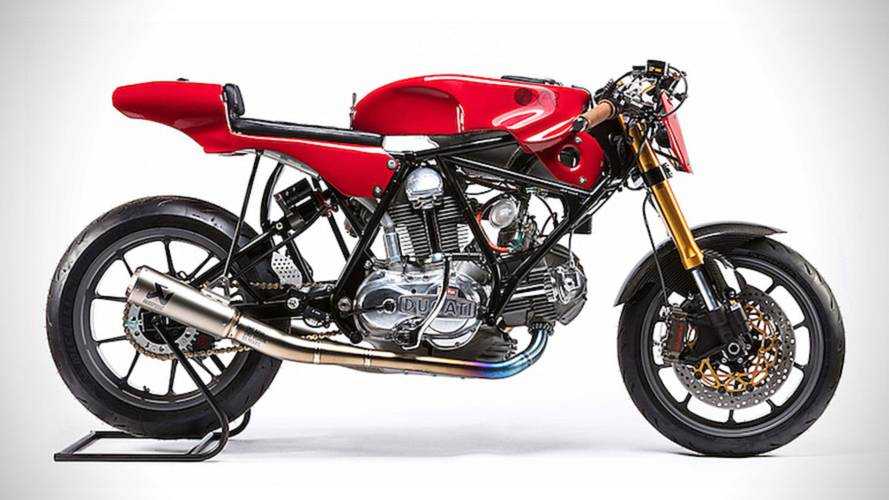 Over the last 55 years, Alpinestars has grown into one of the world’s leading motorcycle gear purveyors, combining technology and functionality into stylish modern packages. So, to celebrate the brand’s 55th anniversary, Alpinestars commissioned Deus Ex Machina’s resident US builder Michael “Woolie” Woolaway to build a machine that encompasses its values. The results, as you can see, are pretty stellar.

“This bike I’m building for Alpinestars is for their 55th anniversary,” Woolie explains in a promo video for the build. “The concept basically is old and new, so modern geometry and suspension and brakes, and old vintage Italian heart which is a great race motor.”

The front-end of the build is all modern

That motor is a race-tuned 1974 Ducati 750 mill that Woolaway managed to get still in in crate. From there, he brought on C and J Frames founder, motorsports legend, and recent AMA Hall of Fame inductee Jeff Cole to churn out build's one-off chassis—a gorgeous trellis unit to wrap around the Italian power-plant.

A detailed shot of the GP-spec exhaust

Next, Woolaway got to work on the custom bodywork, all of which would be painstakingly made by hand in his shop in Venice Beach, California. This included hand-shaping the build’s aluminum tank, front end, and tail section—all of which are visually inspired by Grand Prix race machines. Old-school leatherwork adorns the new tail section and the top of the one-off fuel-cell. A carbon fiber front fender was selected to help balance out the bike’s modern/vintage aesthetic.

THE COST OF A WOOLIE-BUILT: Why Deus loses thousands on each bike it sells

“Styling is going to be vintage Italian GP, ya know, my version of it,” says Woolaway. “To me, that’s Alpinestars as a brand, it’s this old history and heart, but also modern technology and precision of everything they do.”

The entire bike has a very tidy, uncluttered feel throughout

The next phase of the build brought the old Ducati into the 21st century. Top-shelf Brembo brakes were selected and tacked on (interestingly the rear-brake is actuated via a thumb-operated button). A new set of trick Öhlins suspenders were also selected for the build—an inverted GP unit up front and a monoshock in back. Akrapovič was also tasked with creating a full MotoGP-spec exhaust unit (complete with Alpinestars’ logo and “One Goal, One Vision” script). Lastly, a set of modern forged Marchesini rims were selected before being wrapped in Michelin rubber.

Other small accoutrements include a set of custom rear-sets on via one-off brackets, aftermarket clip-ons complete with bar-end signals and new grips, a trick metal reservoir, a small single, round LED headlight flush in the number-plate style front-end piece, and a single instrumentation unit.

The Oscar brand goes hand-in-hand with the anniversary build

It’s probably worth pointing out the “Oscar” logo on the tank, which frankly, makes a ton of sense. Oscar is Alpinestars’ current line of offerings that boast a heavily retro-vintage aesthetic while also offering modern protection and technologies such as Alpinestars’ Tech-Air system. Because of this, Woolaway’s build is something of a perfect metaphor for what the Oscar line is all about.

From this angle, the build looks a whole lot more modern than retro

I personally love this build, though I tend to be a fan of most of the bikes that come out of Woolie’s shop. I do think this bike bears a striking resemblance to another Woolaway creation—the AgoTT—though being one of my favorite build’s of all time, I appreciate the similarities. That said, there are more than enough differences to set the two machines apart. With an overall minimalistic approach, the elements that do remain on the build become that much more important, and I’d argue every last detail on this Ducati has been thoroughly calculated and considered, earning it its place as this week's Bike of the Week.

If you have a bike you think deserves to be RideApart's next Bike of the Week, drop us a line at info@rideapart.com.

Alpinestars also put together a promo video for the bike that's legitimately worth a quick watch...

Photos and video courtesy of Alpinestars