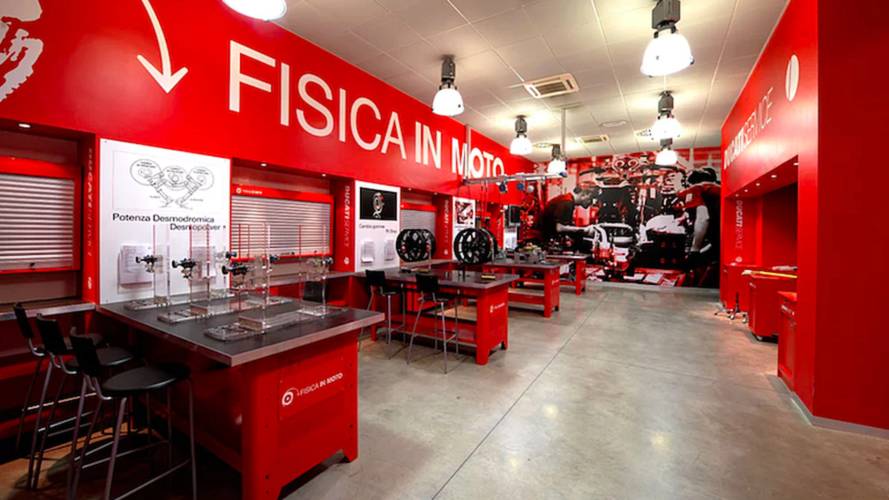 Getting today's kids passionate about physics isn’t easy, but it becomes a much more achievable prospect when motorcycles are introduced into the equation

Ducati opened the Fisika in Moto laboratory in 2008 to get students passionate about science and introduce them to some exciting real-world applications of physics. Though the lab has only been open to student field-trips for the last decade, that’s about to change with the Fisika in Moto facility being added to the rest of the Ducati HQ visit options along with its museum and factory tour.

The Fisika in Moto lab was developed in collaboration with Malpighi High School of Bologna along with the Fondazione Ducati, an important behind-the-scenes branch of the Italian marque responsible for elements of marketing, outreach, and other miscellaneous tasks such as managing the Ducati Museum (and School of Restoration). The latest Fondazione Ducati effort has been revamping the physics lab prior to it opening to the general public as of April 28, 2018.

The MotoGP of Physics room at Ducati's Fisika in Moto laboratory

Unsurprisingly, physics plays a pivotal role in the development of motorcycles, from the bike’s shape and bodywork down to the engine. The Fisika in Moto lab boasts a trio of rooms that wonderfully illustrate this via a myriad of interactive, hands-on experiments and activities for students. The first room is focused on the engine, the second centered around physics and motorcycle dynamics, and the final room—the MotoGP of Physics—exploring the role physics plays in racing (and motorcycles going fast in general).

To convey these concepts, various workstations are setup around the lab demonstrating ideas like lateral acceleration or the difference between weight and mass. Though some of these activities are less relevant than others, the purpose of the entire lab is simply to get the next generation interested in science and to show students that working in physics more than just memorizing formulae and equations.

MORE DUCATI STORIES: How Ducati beat an uphill market in 2017

The Fisika in Moto workshop is located inside Ducati's Borgo Panigale headquarters, and tours are scheduled several times each day. Guided tours are available in both English or Italian. Visiting does require reservations, however there appears to be plenty of available openings. As of now, admission to the Fisika in Moto lab is reportedly only available when purchased as a package when visiting the marque’s historic museum, with tickets costing around $36 per visitor (€30), or for $54 (or €45) if you want to add a factory tour to your trip.

While this video is admittedly pretty old, it nonetheless gives a decent sense of what it’s like inside the Fisika in Moto lab

Photos and video courtesy of Ducati