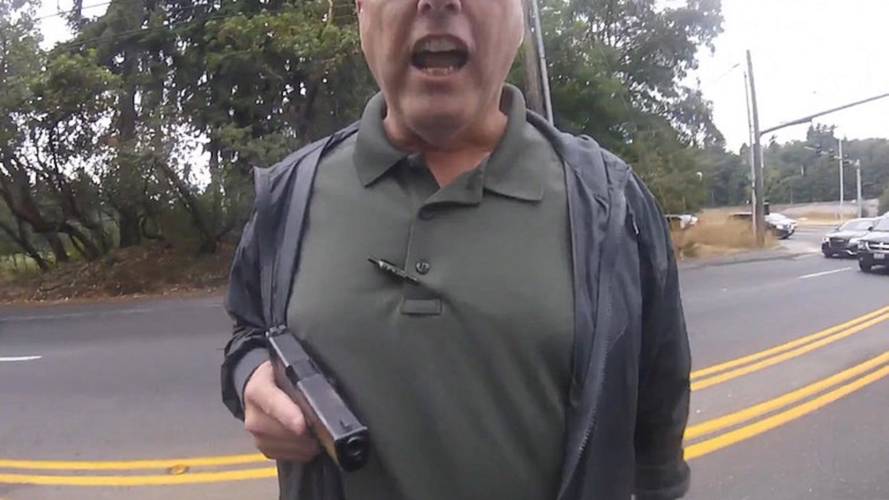 The cop seen in a video that went viral last summer will finally learn of the consequences for drawing his firearm on an allegedly speeding biker.

UPDATE: After initially covering the story, Detective Richard Rowe of the Woodinville Police Department has been hit with a punishment of a whopping five-day suspension. King County Sheriff Mitzi Johanknecht said in a written statement that she reduced Rowe's punishment from the recommended 10 day suspension to a five-day suspension because of mitigating factors, including stress that Rowe and his family went through due to media attention.

This seems so wrong on so many levels. The fact Rowe was hounded by media seems justified as he did a really shitty and dangerous thing. The fact he's keeping his job is objectively ridiculous. Hopefully Alex Randall sues. Original story continues below.

In recent years there has been a disturbing trend of cops—often off duty—unnecessarily drawing guns on motorcyclists. While many of these incidents are prompted by riders piloting their machines recklessly, the dangerous and disproportionate measure is deeply concerning for obvious reasons. A quick Youtube search reveals how frequently these situations occur (like this one, or this one, or this one where the cop actually shoots the biker because "muscle memory"). The consequences for the cops’ actions have varied case to case—but they're typically just a slap on the wrist—but later today we will learn the fate of a King County, Washington, detective who drew his weapon on a motorcyclist while off duty back in August of 2017.

HOW TO NOT GET SHOT: What to do when pulled over by police

On August 16, 2017, Alex Randall was out for a spin when a routine Wednesday afternoon ride took a dramatic and harrowing turn. Randall was pushing his bike a bit too hard, or at least off-duty Woodinville Police Department Detective Richard Rowe thought so. This prompted Rowe to draw his gun and confront Randall while waiting at a stoplight. Randall appears to notice the off-duty, plain clothed detective (who looks like a regular ass person and not a cop) in his mirror as the cop approaches him, though he still sounds legitimately startled when confronted with staring down the barrel of a gun.

“How ya’ doing?” says the detective as he walks up, with a handgun fixed on the rider who exclaims “Oh shit!” in response to the firearm pointed at him. The mere fact Rowe opened with a friendly greeting suggests there was absolutely no need to draw his weapon. After a brief back and forth, the cop demands the biker take out his ID while keeping him in the sights of his gun the entire time, even while holding his ID. The clip was all caught on Randall’s hemet cam and quickly went viral. Rowe defended his actions, explaining that he saw Randall look in the rear-view mirror, lean back, and then drop his hands to his waist area, which Rowe supposedly took as an indicator that Randall had seen him and had a weapon—though the footage clearly shows Rowe’s gun drawn as he approaches.

"His use of firearms, his judgment, and his emotion with how he conducted this stop, just seemed to say, hey, put him behind a desk or something. Just don't have him interacting with the public,” said Randall during one of his many news appearances following the incident. “In the investigation, realizing he's lied in very significant ways, that's a terminable offense. I don't want someone with that level of integrity on my streets policing people. Because that will get people hurt. That will get people killed."

WHY BIKES AND GUNS DON’T MIX: Florida man shoots himself during crash

Rowe as he approaches Randall

After the incident, Randall took to his youtube channel, Squid Tips, recording a trio of 20-30 minute videos (here's the latest one) in which he discusses the ordeal and its subsequent legal proceedings. When Randall was asked if he thought Rowe would keep his job, he responded saying, “I’m sure he will and it's absolutely terrifying. If they do anything less than fire him, this is not going to be the end of it, I'm going to pursue a civil suit because that's not right."

Even though his finger is off the trigger, pointing the barrel of a gun at someone like this seems really dangerous

We’ll be sure to update you on the outcome of the case.