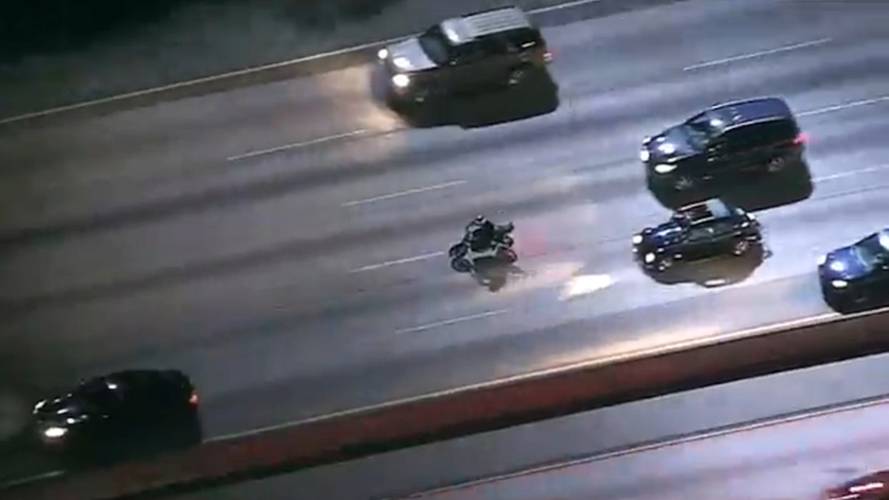 Outrunning most cars on a motorcycle is a relatively easy task, outrunning a police helicopter is a much taller order as one SoCal rider recently learned.

Motorcycles offer supercar performance, though unlike supercars anyone can pick up a used liter bike on their local craigslist for a few grand. This puts some very capable mounts in the hands of less-than-astute individuals which, unsurprisingly, leads to some interesting situations. Why stop for the red and blue lights when you’re sitting on a 180 mile per hour bike? Well that appears to have been the reasoning of one Southern California rider who recently lead the authorities on a high-speed chase after getting lit up for a simple moving violation.

According to KVOA, police in the West Covina area of Los Angles, California, observed a motorcyclist roll through a stop sign during the weekend of April 27, 2018. After getting behind the biker, it became very clear that he had no intentions of pulling over to handle the minor infraction. Instead, he hopped on the closest freeway, grabbed a handful of throttle, and the chase was on.

It is unclear at this time exactly why the rider tried to flee authorities; no license? stolen bike? DUI? warrants? Who knows? What is equally unknown is why the chase came to an abrupt end after only several minutes. One theory is that the biker saw the helicopter hovering above him and realized it was game over, however in the video it appears the rider seems to have some kind of of issue with the bike just before stopping and getting cuffed.

Like many police chases, the police came out on top, largely thanks to their helicopter

If we learn anything else about this strange case—and we will because we have our top men on it. (Top. Men. -ed.)—well be sure to update this story for you.