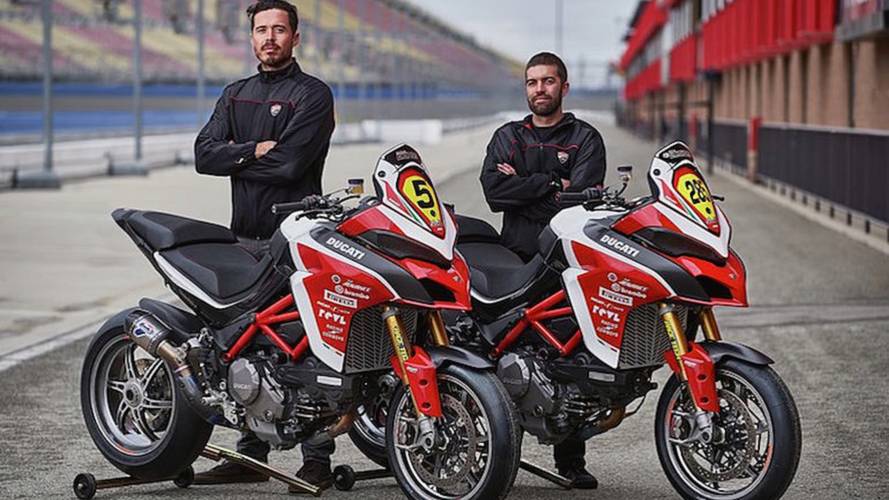 Ducati just announced that it will be returning once again to Colorado this June for the 96th running of the Pikes Peak International Hill Climb where its new Multistrada 1260 Pikes Peak Edition will make its race debut. At the helm of the new bikes will be the current Ducati team record holder Carlin Dunne and the current middleweight record holder Codie Vahsholtz. Both racers are more than well acquainted with the course leading up to the mountain’s 14,115-foot summit.

Together, Dunne and Vahsholtz make up the 2018 Spider Grips Ducati Pikes Peak team, which receives additional support from Shell Advance, Brembo, Pirelli, Termignoni, Spider Grips, Ducati by Rizoma, Race Tech, Revl, and Racing Cowboys. With the help of the aforementioned outfits the team has put together a fiercely competitive and modern machine that Dunne hopes to use to reclaim his place as record holder.

The fastest motorcycle time ever clocked on the Colorado mountain was done on a Multistrada, or it was at least until 2017 when Chris Fillmore stole that title and passed the honors onto KTM. So Ducati, for obvious reasons, has ample motivation to win back the crown.

“After holding the course record for many years, we had decided to use our experience on the mountain to help support the safety of riders with the introduction of the Squadra Alpina program and keep the tradition of motorcycle racing on the mountain. Our efforts proved to be successful,” said Jason Chinnock, Chief Executive Officer of Ducati North America. “After 2017, when Dunne’s record was finally broken by a small margin, it inspired us to race again with the goal of reclaiming the title. The riders, team and new Multistrada 1260 Pikes Peak are destined to be a force on the mountain.”

To get a decent sense of what it’s like to race Pikes Peak, there’s an awesome episode of Speed with Guy Martin where he heads to Colorado and competes in the iconic race on a custom made turbo bike. The “Race to the Clouds” takes place on Sunday, June 24.