Leaving the Office Grind to Become a Moto Tour Guide 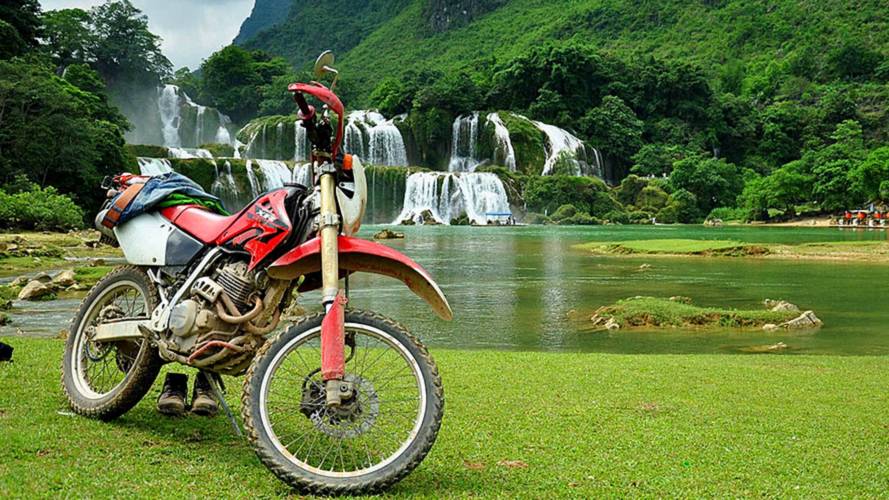 One man said goodbye to his life in the UK and ran away to Vietnam to be a motorcycle tour guide.

Donovan Hawkmoon Boxer spent eight years selling income protection insurance—a product he describes as “the most boring thing on the planet”. Boxer’s career reportedly afforded him a comfortable income that enabled him to take annual motorcycle trips to exotic locals, but despite the big paycheck, Boxer wasn’t content with his nine-to-five existence in Manchester. After hearing about a friend of a friend who runs his own motorcycle tour operation in Hoi An, Vietnam, Boxer decided to take a chance chasing his dream job. He quit his insurance sales position, rented out his flat, crossed his fingers, and booked a one-way flight to Vietnam.

Take a Motorcycle Tour in Cuba with a Revolutionary Leader's Son

Five Great Touring Bikes for Under $5,000

Boxer’s plan was pretty loose. After firing off an email to the company he didn’t hear back, so the next day he simply waltzed into the Hoi An Motorbike Adventures office and confidently informed them, “I’m planning to come and work with you”. Boxer says they laughed at him, but nonetheless, he supposedly began work there the very next day.

There was a bit of a learning curve for Boxer in terms of figuring out how to work with clients and remedy problems or conflicts within his party. There’s also been some cultural adjusting for the Brit which has resulted in some pretty amusing anecdotes.

“On one occasion, I was taking a tour through a hill tribe village during Tet—the Vietnamese New Year—and a couple of us were invited in by the village chief for dinner. The centerpiece of the meal was a barbecued rat. He put the rat’s head in my bowl, and I thought he was joking. Then there was a big argument between the chief and the translator because it had been intended as an honor,” recalls Boxer.

Boxer’s day-to-day now consists of operating ten-day-long, 15 rider tours around Vietnam. While this is a very different experience than normal recreational riding, he's still earning his living spending his days in the saddle.

“In comparison to any job I’ve done before it’s not the slightest bit tough. I don’t get paid as much as I did in the UK but, as long as I stay in Asia, I have a very good quality of life. I love people — that’s why I was good at sales — but when people are on holiday they’re the happiest, the most fun, they’re ever going to be. I’m getting to see people at their very best. For me, there’s no turning back,” explains Boxer.

Boxer’s story is an excellent reminder that there are countless jobs in the motorcycle industry, and sometimes it just requires taking a chance to get to where you want to be. As some hockey player supposedly once said, “You miss 100 percent of the shots you don’t take”.