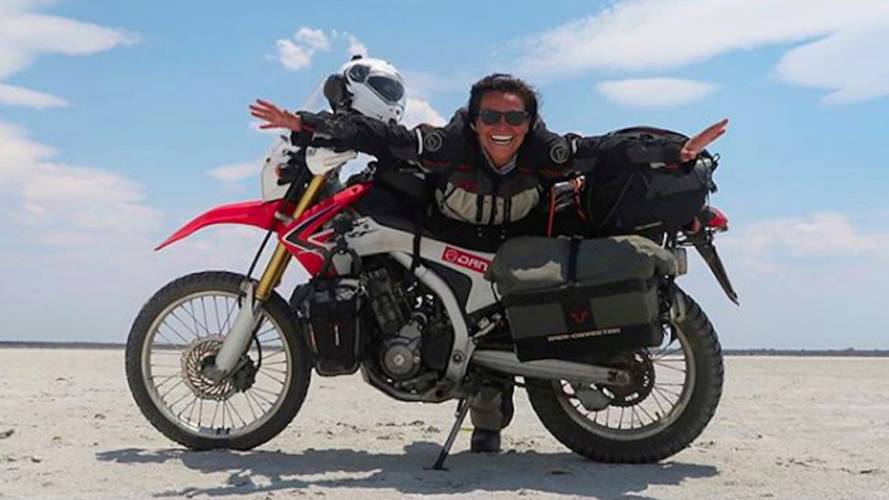 Gülçin Söğüt has already taken on more than 30,000 miles of African terrain through more than two dozen countries on her motorcycle dream tour

We all grieve in our own way, Gülçin Söğüt’s grieving process consists of traversing Africa on two-wheels

“We now have a different view of Africa from the image we had about the continent, which was mostly negative,” says Gülçin Söğüt, a Turkish woman in her mid-thirties who has been riding around Africa since 2013. Despite all the hurdles involved in a trip of this scale, Söğüt hasn’t let that stop her from taking on her dream motorcycle tour.

Söğüt and Schouten posing with their bikes

In 2013 Söğüt’s mother passed away. This major life event seemingly reminded her that our time on this planet is short, motivating her to spend her days doing what she wants which happens to be traveling.

“So I gave up everything, including my job. I packed my bag and set off to Latin America. I stayed there three years,” says Söğüt.

MORE MOTO GLOBETROTTERS: Becoming the youngest person to ride around the world

Gülçin Söğüt, flinging up some dirt

While trekking around Indonesia Söğüt met a European vacationer named Ferry Schouten who, despite having zero experience with motorcycles or riding, joined Söğüt on her long distance, African journey. With a budget limited to only $50 per day—which I imagine probably goes a pretty long way in Africa—Söğüt and Schouten have already clocked more than 30,000 miles across the continent.

“Our African tour has been both pleasant and chilling. Riding on sand dunes and gravel is the most difficult to me. The scariest of all so far was when a man was about to strike me with a machete, coming out of nowhere as we were riding,” Söğüt said.

Thus far the two have traveled through 32 different African countries, and there are still a couple weeks left before the trip comes to an end. Plus the pair of riders still have yet to visit the Sudan and Egypt, so there’s still plenty to look forward to down the road. Interestingly Söğüt has developed quite the social media following, with more than 14,000 followers on Instagram alone, and for good reason. You can click here to follow the adventures of Söğüt and Schouten on Instagram.